Saint-Gobain partnered with YouthBuild Schenectady on the renovation of a home at 843 Emmett St. in Schenectady-the non-profits' first gut-rehab home in Schenectady. The home remodel was designed to achieve the U.S. Green Building Council's (USGBC) Leadership in Energy and Environmental Design (LEED) Gold certification.

Saint-Gobain partnered with YouthBuild Schenectady on the renovation of a home at 843 Emmett St. in Schenectady-the non-profits' first gut-rehab home in Schenectady. The home remodel was designed to achieve the U.S. Green Building Council's (USGBC) Leadership in Energy and Environmental Design (LEED) Gold certification.

More than 80 YouthBuild Schenectady students, along with the Saint-Gobain Corporation Foundation, worked on the home over a 23-month period. Employees from Saint-Gobain companies, including CertainTeed, gave 300-plus hours of time to the project, providing building science and technical expertise focused on ensure LEED certification of the home as well as mentoring students. 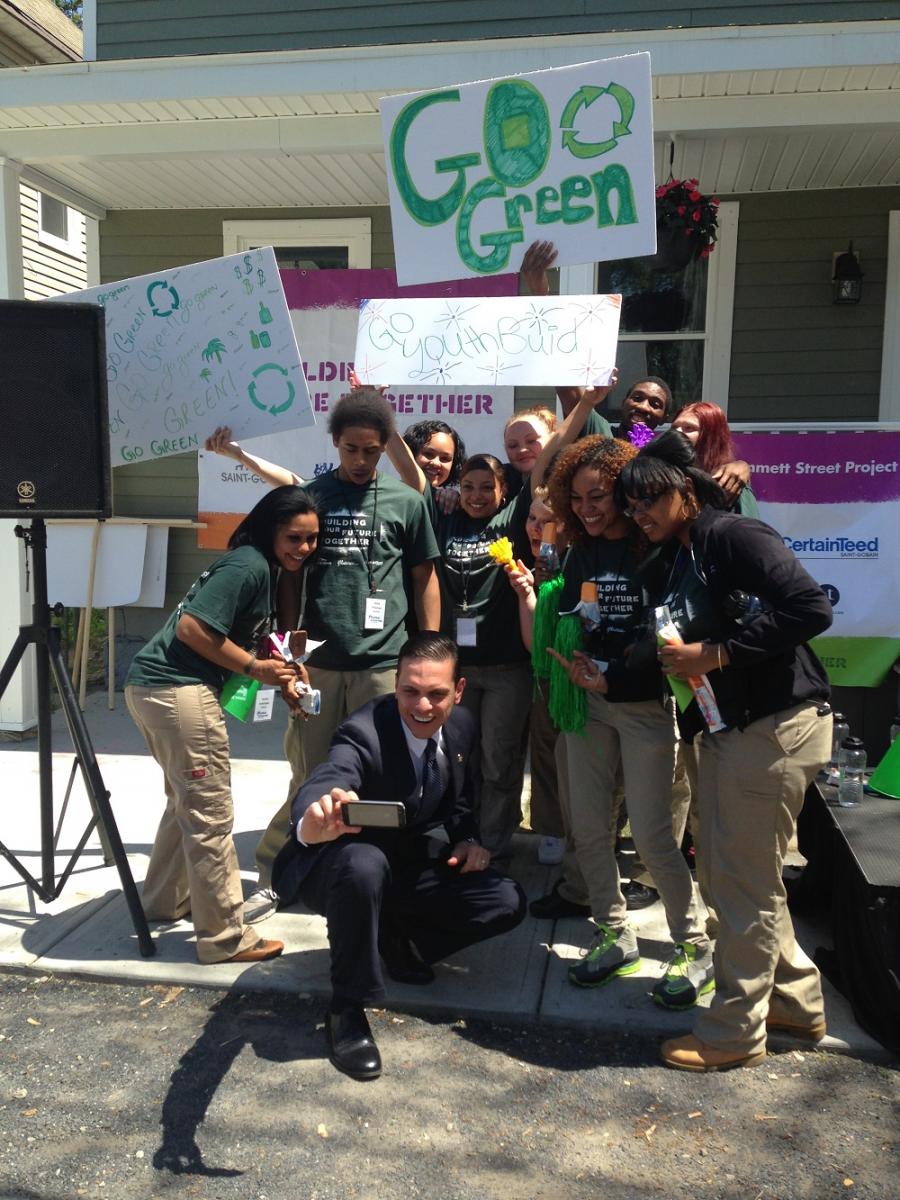 One part of the system was CertaSpray Closed Cell Foam, a medium-density, MDI-based (methylene diphenyl diisocyanate) polyurethane thermoset foam. It is provided as a two-component system, with an HFC blowing agent that has zero ozone depletion potential.

Another part of the insulation system is Optima Blow-in Insulation, an unbonded, white, virgin fiber glass.

The third part of the insulation system is the MemBrain Smart Vapor Retarder & Air Barrier Film, a 2-mil thick polyamide-based (Nylon) film. This film, which looks similar to typical polyethylene film, is designed to breathe-it protects wall cavities like a traditional vapor retarder as well as allowing closed building envelope to increase their drying potential with seasonal climatic changes. It accomplishes this by changing its permeability with the ambient humidity condition.

The MemBrain film has a high resistance to water vapor in winter or low humidity, when it works like standard polyethylene vapor retarder. When the humidity is high, such as in summer, the water vapor permeability of the material increases significantly, letting water vapor escape the wall cavity easily. CertainTeed says that the use of this smart barrier will reduce a homebuilder's risk and liability from moisture problems, while adding only about $300-$500 to the build cost of an average home.

The Hybrid Insulation System calls for the foam insulation to provide a seal on the backside of the home's sheathing while the fiberglass insulation fills the rest of the cavity. The systems provides an overall R-value that is close to that of a passive house (a house designed for ultra-low energy use) with significant cost savings when compared to foam-only insulation.

The house in Schenectady was the scene of a ribbon-cutting event in early June 2014, with U.S. Senator Kirsten Gillibrand and U.S. Congressman Paul D. Tonko on-hand to recognize the accomplishment of the students.