Baseball is back! Now big-time baseball fans love to talk about the best ballparks to visit for games. There are always the usual suspects such as Wrigley Field, Fenway Park and Yankee Stadium. However, if you happen to be a packaging fanatic in addition to baseball, I suggest you check out Safeco Field in Seattle.   Arguably, the Seattle Mariners ball club could be at the top of the game when it comes to sustainable and innovative packaging.  Sustainable snack packaging

Baseball is back! Now big-time baseball fans love to talk about the best ballparks to visit for games. There are always the usual suspects such as Wrigley Field, Fenway Park and Yankee Stadium. However, if you happen to be a packaging fanatic in addition to baseball, I suggest you check out Safeco Field in Seattle.

Arguably, the Seattle Mariners ball club could be at the top of the game when it comes to sustainable and innovative packaging.

I don't need to tell you the important role packaging plays in protecting food at baseball games, but there's no denying

that trash and litter are a huge issue for all stadiums that host sporting events. That's one initiative the Seattle Mariners team hopes to solve with its aggressive zero-waste goals. Last year, the team predicted it would divert 85% of its waste from landfills, which was up from 12% in 2006. The team has a goal of 90% diversion.

I talked with Rebecca Hale, director of public information for the Seattle Mariners, and she told me the team has been working hard since 2006 to raise awareness among fans of not only what the Mariners are doing to reduce their impact on the environment, but to help them understand ways to make simple changes in their own lives outside of the ballpark.

For instance, there are more than 400 recycling and composting receptacles throughout Safeco Field, but only 16 true "garbage cans."

"Because most items sold in the ballpark are recyclable or compostable, there's less need to collect items for the landfill," she said. "And because people are still "programmed" to throw waste in garbage cans, we're taking away the temptation to put recyclables/compostables in the waste stream. We are willing to incur the added time and expense to hand-separate the waste."

Still, an ongoing issue is various plastic packaging, such as candy wrappers, energy bar foils, and peanut bags, which are sold by outside vendors, brought in by fans and can't be composted or are not easily recycled.

While all the service ware offered at the stadium is already compostable, the Mariners VP of Operations Scott Jenkins said that snack food bags is one of the biggest barriers in preventing the team in reaching the 90% diversion goal. 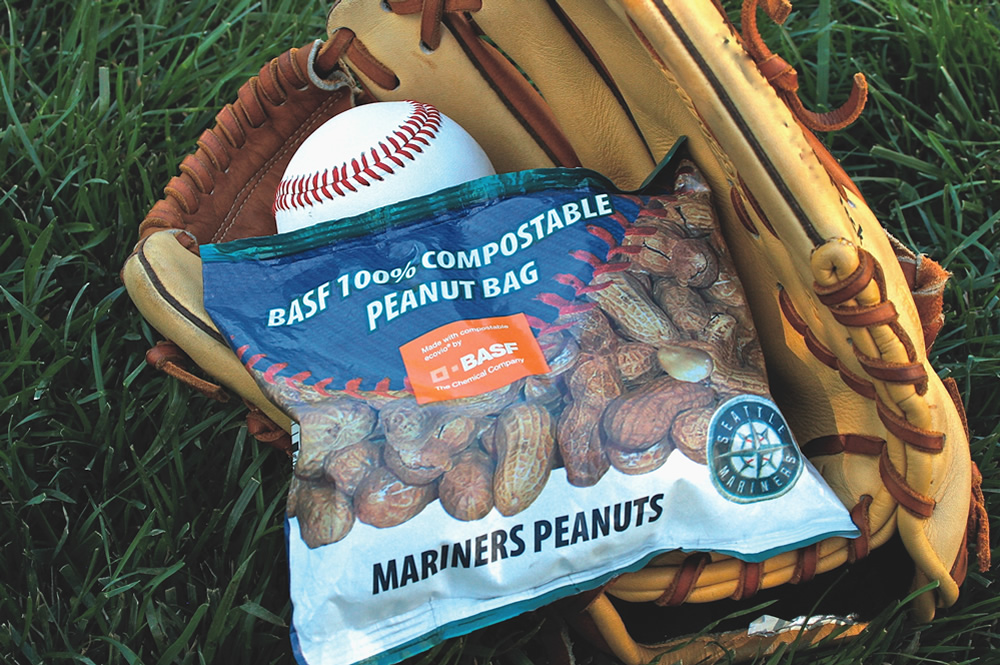 To get closer to that goal, the Mariners partnered with chemical giant BASF to offer packaging developed with the BASF's biopolymer technology.

On Sept. 5, 2012, the first 10,000 fans who arrived at Safeco Field that day to see the Seattle Mariners take on the Boston Red Sox received a free bag of peanuts in a 100% compostable snack bag, which were then captured in normal game cleanup operations.

All the compostables are sent to Cedar Grove Composting, which handles a majority of the Seattle area compostable and green waste. Since the peanut bags were 100% compostable, they did not have to be hand-separated for the landfill and were instead included in the recycling/composting waste stream after the game.

The bags use BASF's compostable food packaging structure comprised of a six-layer film that includes film resins, inks, adhesives and primers. The design of the packaging and its materials allow for the entire structure to be composted.

Hale said the giveaway was a one-time event at Safeco Field, but they are hopeful that the development of products like this could make it more attractive to suppliers to use compostable products in packaging and manufacturers to make them at competitive prices.

"This partnership with BASF has helped us reach out to our fans with environmental messages and it has helped open doors for improved access to products that make it easier for us to meet our recycling goals at Safeco Field," she said.

Based on a concept developed 18 months prior at their initial ideation session with the Mariners facilitated by their marketing agency, Green Bear Group, BASF offered resources, ideas, and its powerful networking skills to connect several local environmental groups, government agencies, and non-profits into a single voice in support of the Mariners Zero Waste programs.

The 2012 Sustainable Saturdays, which will continue in 2013, bookended with Kitchen Catcher Giveaway Day in April and finished with Compostable Peanut Bag Giveaway Day in September. And at each Sustainable Saturday, fans were engaged with signage in the concourse, messaging on the LED boards, volunteers at each Zero Waste station, and the BASF Kid Compost Trivia Game, BASF stated.

PET to give wine a competitive edge?

For those who prefer to drink vino while watching homeruns, Fetzer Vineyards has partnered with wine packager Zipz to sell single-serve PET wine bottles at baseball stadiums. Guess which MLB stadium will be among the first to offer this PET packaging for wine? Safeco Field.

Zipz is the exclusive provider of Z Selections, a new collection of 187-ml premium wines in single-serve glass made 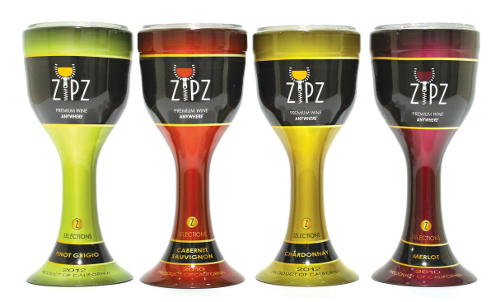 from PET plastic that looks and feels like traditional glassware, but is safe for use indoors, outdoors, or on the go. According to the news release, each Zipz glass is covered in a patented clean wrap that keeps the wine fresh and the glass clean from handling, making Zipz ideal for use in public venues. Both the Zipz glass and clean wrap are 100% recyclable.

As part of this partnership, Centerplate, a provider of food and beverage services for North America's sports and entertainment industry, collaborated with Fetzer and Zipz to bring this offering to select stadiums across the country. "We believe that wine drinkers will appreciate a high quality wine in a convenient, well-designed single-serve glass at the park," said Centerplate's Chief Design Officer John Sergi, in a statement.