Self-repairing polymers on the horizon

Materials that repair themselves, much like severed lizard tails that regenerate, may be within reach. Researchers at the University of Pittsburgh Swanson School of Engineering have developed computational models for a polymer gel that would enable complex materials to regenerate themselves.

Materials that repair themselves, much like severed lizard tails that regenerate, may be within reach. Researchers at the University of Pittsburgh Swanson School of Engineering have developed computational models for a polymer gel that would enable complex materials to regenerate themselves. The research is described in "Harnessing Interfacially-Active Nanorods to Regenerate Severed Polymer Gels," which was published on November 19 in the American Chemical Society journal Nano Letters. 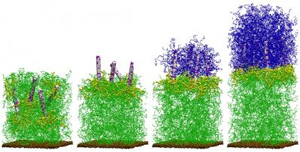 "This is one of the holy grails of materials science," notes lead researcher Anna C. Balazs, PhD. "While others have developed materials that can mend small defects, there is no published research regarding systems that can regenerate bulk sections of a severed material. This has a tremendous impact on sustainability, because you could potentially extend the lifetime of a material by giving it the ability to regrow when damaged."

Tissue regeneration in nature is guided by a so-called dynamic cascade of instruction sets: initiation, propagation, and termination. To replicate that process in a synthetic material, the researchers had to address the transport issue, their biggest challenge, says Balazs.

"Biological organisms have circulatory systems to achieve mass transport of materials like blood cells, nutrients, and genetic material. Synthetic materials don't inherently possess such a system, so we needed something that acted like a sensor to initiate and control the process," explains Balazs.

A press release on the university site describes how the researchers met this challenge:

The team developed a hybrid material of nanorods embedded in a polymer gel, which is surrounded by a solution containing monomers and cross-linkers in order to replicate the dynamic cascade. When part of the gel is severed, the nanorods near the cut act as sensors and migrate to the new interface. The functionalized chains, or skirts, on one end of these nanorods keeps them localized at the interface and the sites (or initiators) along the rod's surface trigger a polymerization reaction with the monomer and cross-linkers in the outer solution.

Guidelines in the computational models control the process so that the new gel behaves and appears like the gel it replaced, and so that the reaction terminates and the material does not grow out of control.

The next step for the researchers is to improve the process and strengthen the bonds between the old and newly formed gels. The majestic sequoia trees inspired a solution. "One sequoia tree will have a shallow root system," Balazs explains, "but when they grow in numbers, the root systems intertwine to provide support and contribute to their tremendous growth. Similarly, the skirts on the nanorods can provide additional strength to the regenerated material."