Aircraft manufacturers now have a new polymer choice for use in thermal acoustic insulation blanket (TAIB) cover film as an alternative to more costly PEEK (polyetheretherketone) and Tedlar polyvinyl fluoride (PVF), which has been in short supply.

Chase-Facile's Insulfab 4000 thermal acoustic insulation blanket made with Halar ECTFE (ethylene chlorotrifluoroethylene) cover film from Ajedium Films has been qualified to meet Boeing BMS 8-377 for both Class 00 and Class 1 Types I & II and has been officially added to the Boeing Qualified Products List.

This qualification allows Insulfab 4000 to be used as a drop-in replacement for the Tedlar cover film.

This new product consists of a lamination of film made from Halar ECTFE (a 1:1 alternating copolymer of ethylene and chlorotrifluoroethylene), nylon fabric, and a proprietary adhesive.

Insulfab 4000 insulation film provides resistance to fire propagation in thermal acoustic insulation required by FAR 25.856(a). Halar ECTFE film is also used in flame barrier material designed to meet the requirements of FAR 856(b), which mandates resistance to flame penetration and heat release into the passenger compartment.

The types of plastics used for these applications have been heavily regulated since investigators ruled that metallized polyester film used in a TAIB application was a factor in fatalities in a Swissair crash in 1998.

Ajedium Films played a role in qualifying ketone films as a replacement, but some aircraft design engineers have been seeking a less costly alternative. Meanwhile, another important alternate, Tedlar films produced by DuPont, have been in short supply because of skyrocketing demand for their use in photovoltaic cells.

DuPont has also restricted, or totally cut, supply of Tedlar for other applications, such as environmental testing bags, as well as it strives to boost capacity and meet demand from the photovoltaic industry.

Since 2006, DuPont has announced investments of $365 million in an effort to boost Tedlar capacity by 50%. These efforts include investment of $175 million to complete the multi-phase expansion of its high-performance PV2001 series oriented film production line at Circleville, OH.

Another alternative film for TAIB is PEKK (polyetherketoneketone), which Ajedium Films continues to supply. Victrex is a major supplier of PEEK films for aircraft insulation cover films. The Halar resin used by Ajedium comes from a Solvay Solexis plant in Orange, TX.

Channeling David Letterman, the Society of the Plastics Industry (SPI) has released a list of the top 10 reason plastics industry players should make plans to be in Orlando in the first week of April. If you’re headed to the big show, what’s your top reason?

Around 20,000 unique companies from more than 120 countries, shopping the show floor to see the latest trends, technology and products the plastics industry has to offer; that, ultimately is the opportunity NPE2012 holds out to exhibitors and visitors.

Show organizer, the Society of the Plastics Industry (SPI), released a partial list of attendee buying groups that will be in Orlando at the Orange County Convention Center (OCCC) from April 1-5, with the names reading like a who’s who of Fortune 500 names…Apple, General Motors, Nike, Coca-Cola, PepsiCo, Boeing, Ford, Toyota, Microsoft, Motorola and more.

Of those visitors, SPI notes that:

SPI has the complete attendee list at its show site.

The Society of the Plastics Industry (SPI) has contracted Maine Plastics Inc. as the official recycler for NPE2012, tasking the company with the collection, separation, transportation, and reprocessing of production-line scrap, as well plastic waste like PET bottles left behind by the show’s more than 60,000 expected visitors. 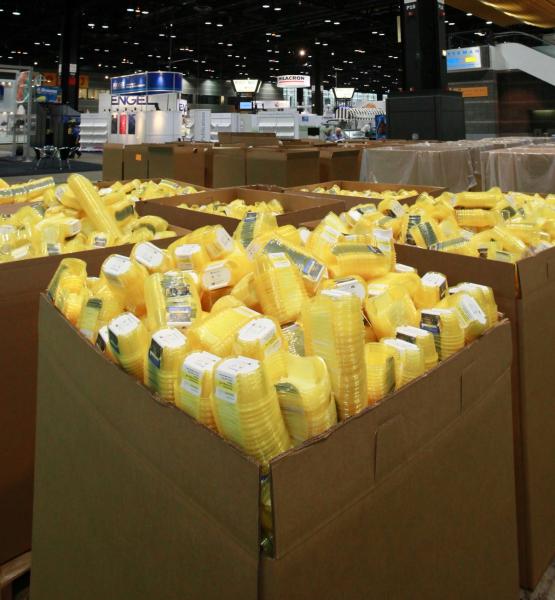 David Spitulnik, president of Maine Plastics, said his company’s goal is to equal or surpass the NPE2009 recycling program, in which it collected and recycled 95% of the recoverable materials, amounting to 125,000 lb [57 tonnes]. NPE2012 is the fifth consecutive edition of the triennial NPE for which Maine Plastics has provided these services.
Gene Sanders, SPI’s senior VP of trade shows and conferences noted that the show organizers is expecting to see a lot more scrap produced on the NPE2012 show floor, as a result of a “substantial” increase in the number of machines, running on the show floor.
SPI is also organizing a PET recycling demonstration and exhibit, sponsoring a live reprocessing demonstration, plus an exhibit of products manufactured from recovered PET bottles, including fibers and clothing, strapping, and more bottles.
Maine Plastics, which is headquartered in Zion, IL and was established in 1983, processes more than 140 million lb (63,600 tonnes) annually. The company opened a new plant in Utah late 2011, with that site joining existing plants in Zion and Kankakee, IL; Schoolcraft, MI; Dover, DE; Apex, NC; Richmond, VA; Stratford, CT; Buffalo, NY; and Columbus and Kearney, NE.

The second International Plastics Design Competition (IPDC) is now open for entries from any end market and any country in the world, with selected parts and applications to be displayed at the Society of the Plastics Industry’s (SPI) triennial event, NPE2012 (April 1-5; Orange County Convention Center (OCCC); Orlando, FL). 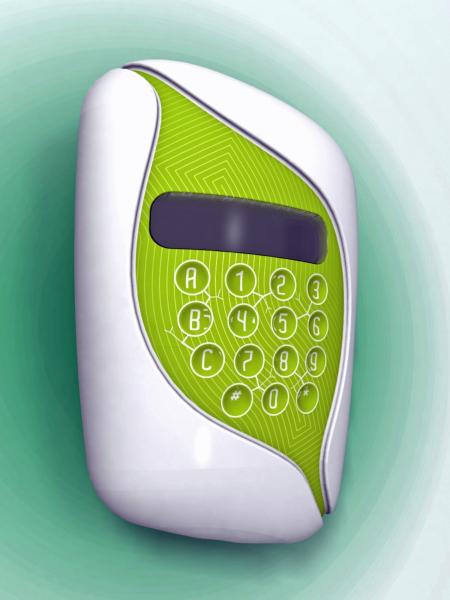 Entries, which can now be submitted by February 29, 2012, can be for finished products or components and can be submitted by any individual or company along the supply chain, including designers, toolmakers, processors, material suppliers, equipment builders, or OEMs.

Photos and details for most entries will be posted at www.plasticsdesign.org, where site visitors will be able to cast their votes for a People’s Choice award. At NPE2012, products or parts entered into the competition will be displayed in the Orange County Convention Center’s South Building.

An awards reception and ceremony will take place during NPE2012 on Tuesday evening, April 3, where winners, along with their supply chain contributors will be recognized and honored. All awards other than the Peoples Choice will be based on the decisions of judges selected by SPI for their knowledge of plastics and design.

Entries can be submitted in any of 18 end-use market categories, ranging from agriculture to transportation, with an award for the winning product in each category, a grand award for the most innovative part or product in the competition as a whole, awards honoring advances in sustainability, and other special awards.

In 2009, a twin-sheet blowmolded fuel system for BMW of North America won in the Innovations in Plastics and the Automotive awards, while a prepaid energy meter molded from recycled PET for Colombia’s Excelec & Cia was the Peoples Choice award winner. See these and other 2009 IPDC award winners, at this page.

The benefits of the standardized techBEX complete line concept can be summed up under the motto "quality meets cost-efficiency" according to battenfeld-cincinnati. They are said to be a perfect example of high-quality manufacturing made in Europe, available at an attractive price and with short delivery times. techBEX lines cater particularly to companies with a wide product range and small production lots.

battenfeld-cincinnati has designed its techBEX lines so that they can handle a wide variety of applications with a high degree of standardization. This means that they are equally suitable for producing hollow profiles from resins including ABS, PS, PA, PC, PMMA, polyolefin or PVC for the building, furniture and automotive sectors and for making sealing profiles from thermoplastic elastomers as well as small pipes up to 63 mm in diameter. The high degree of standardization not only makes the attractive price and short delivery times possible, but also fosters extremely easy operation thanks to among other factors a reduced number of interfaces.

The individual components of techBEX lines are an extruder from the successful alpha series and the techBEX extrusion downstream equipment package. alpha single-screw extruders are available with screw diameters of 45, 60 or 75 mm and with either smooth or grooved feed zones. All extruders feature high screw torque and a wide processing window. A choice of optimized screw geometries ensures enormous flexibility regarding the types of polymers to be processed, and the pft power feed technology of the 28 or 30 L/D screws ensures reliable specific outputs. The extruder concept is rounded off by energy-efficient AC drives. For dry blend processing, the conical twin-screw extruder models Konos 38 and Konos 50 can also be used.

The downstream equipment package includes a calibrating table from the CT series with a length of either 2.5 or 3 m, a B 100 E belt haul-off, an SP 50E cutting saw and a PA 150/3m tilting table. The calibration table can easily be adjusted manually in lateral and longitudinal directions as well as in height. Thanks to its C fastening rails, it can be adapted to a variety of dies. It comes with a central water tank and a central water and vacuum distributor and ensures a stable vacuum thanks to its powerful vacuum pumps.

The B 100 E belt haul-off with its separate AC drive for each haul-off transport belt and length measurement device to trigger the cutting saw ensures smooth, gentle haul-off for the profiles. The cutting saw powered with a servo motor delivers precise cuts and is easy to operate, thanks to its own control system. It also provides easy access to the saw blade to facilitate maintenance. The special features of the tilting table include two pneumatic cylinders and the option to combine two 3 m tilting tables into one with a total length of 6 m.

The downstream equipment package is delivered completely pre-assembled, including electric wiring, so that it can be started up immediately on site. Both the techBEX downstream package and the alpha extruders are designed to function as parts of the complete line, but they can also be used as flexible individual units.-[email protected]