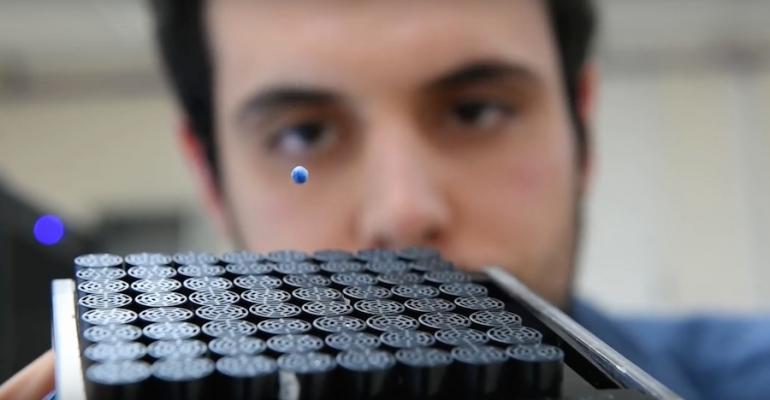 The amazing gizmos popularized by the Star Trek franchise continue to inspire the imaginations of scientists. PlasticsToday has reported on the Qualcomm Tricorder X-Prize competition currently underway, in which inventors of all stripes attempt to turn Dr. McCoy's iconic device into a functioning handheld universal diagnostic tool.

The amazing gizmos popularized by the Star Trek franchise continue to inspire the imaginations of scientists. PlasticsToday has reported on the Qualcomm Tricorder X-Prize competition currently underway, in which inventors of all stripes attempt to turn Dr. McCoy's iconic device into a functioning handheld universal diagnostic tool. Ten finalists remain in the running with a winner to be announced in January 2016. Now, researchers at the universities of Sussex and Bristol in the United Kingdom, in collaboration with startup company Ultrahaptics (Bristol, UK), have succeeded in building a version of the tractor beam that moves objects via sound waves. The invention could have applications in inner as well as outer space: The researchers envision a miniature version of the device that could perform drug delivery and microsurgical operations.

The technique involves the use of an array of 64 miniature loudspeakers to create high-pitched, high-intensity sound waves to levitate an expanded polystyrene spherical bead at a maximum diameter of 4 mm, explains a press release on the University of Sussex website. The so-called tractor beam uses surround sound to create a force field that keeps the object in place. By adjusting the output of the loudspeaker, the object also can be moved or rotated. The research is described in detail in a paper published on Oct. 27, 2015, in Nature Communications.

Although other researchers have explored the use of sound waves to manipulate objects, this project achieves a level of unprecedented control, according to paper co-author Bruce Drinkwater, Professor of Ultrasonics in the University of Bristol's Department of Mechanical Engineering. Previous attempts have also required surrounding objects with loudspeakers, which limited the movement and potential applications; the Sussex and Bristol researchers designed a system that would work with an array positioned on a single side.

Speaking with the BBC, Drinkwater explained that the beams are generated using a clinically approved device designed for focused ultrasound surgery, and medical technology is among the exciting potential applications. "Our method, we hope, will now be applied, both at a smaller scale—maybe for medical purposes—and at a larger scale, potentially for handling dangerous materials in some sort of non-contact production line," Drinkwater told the BBC.

Indeed, the research team is now working on a larger version of the device that could levitate a soccer ball from 10 meters away and a smaller one that could manipulate particles inside the body.

The video embedded below describes the technology.