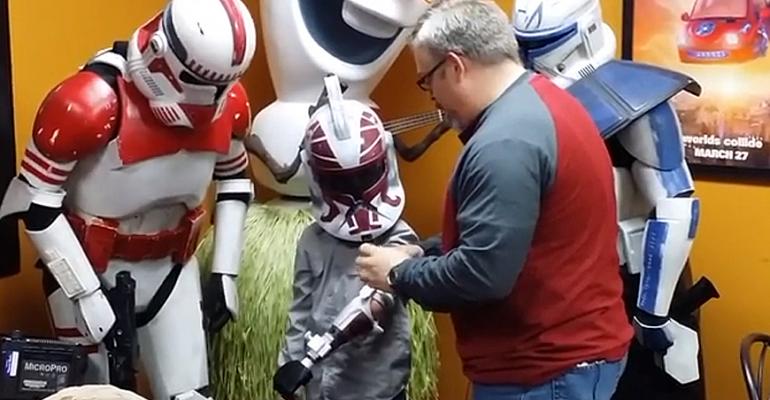 We know about Greeks, but should you beware of Stormtroopers bearing gifts? Not if you're a young man who was born without part of his left arm. Seven-year-old Augusta resident Liam Porter got the surprise of his young life on Saturday, Jan. 10, when the Augusta, GA, chapter of the 501st Legion, aka Darth Vader's Fist, presented him with a 3D-printed Star Wars–inspired arm. Unlike their cinematic counterparts, these Stormtroopers are in the business of doing good. Check out the video below to share in a moment of sheer joy.

The 3D-printed arm was created by John Peterson, also from Augusta. With help from E-nable, an online community that provides free plans and technical assistance to tinkerers of all stripes who want to print prosthetic fingers, hands, and arms for children in need, he was linked up with Liam's family and began designing and printing the prosthetic.

A standard prosthetic hand for a child costs upward of $9,000, reports CBSNews.com, and many insurance companies won't cover prostheses for children because they will quickly outgrow them. Moreover, Liam's family has struggled for years to find a prosthetic that he could be proud of and is able to use with ease, according to the news site. The 3D-printed arm, by contrast, cost about $300 to make and can be adjusted as Liam grows up.

As you can see in the video, in addition to the new prosthetic, Liam received a Stormtrooper helmet and a certificate officially naming him a "Friend of the Garrison" of the 501st Legion.

"I'm sure he'll be the coolest kid in the class," says Peterson. In our book, Peterson is pretty damn cool, too.

To learn more about E-nable and the great work it is doing, go to enablingthefuture.org.