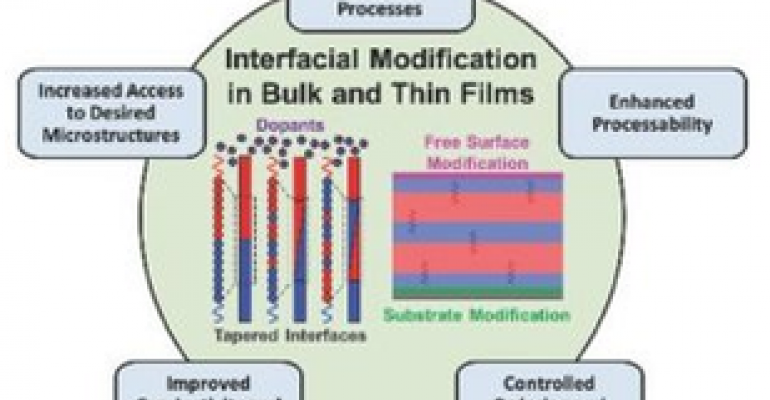 Researchers have developed new methods to manipulate the phase behavior, thermal transitions, and mechanical and transport properties of block polymers to optimize their design.

Researchers have made improvements in the development of block polymers for use as advanced materials in energy generation, information storage, medical devices and other applications

Material scientists believe that advanced materials are the way forward for more efficient and productive solutions in energy generation, information storage, medical devices and other applications. To that end, researchers at the University of Delaware have taken a multidisciplinary approach for developing block polymers to help them advance their uses in these applications and beyond, they said.

Block polymers are materials in which two or more polymer chains with different properties are linked together. A research team led by Thomas Epps, a professor of chemical and biomolecular engineering and materials science and engineering, have developed new methods to manipulate the phase behavior, thermal transitions, and mechanical and transport properties of block polymers to optimize their design, he said.

“We are using synthesis, processing, and characterization methods that are robust and widely applicable, with an eye toward scaling these methods to facilitate the future industrial adoption of block polymers,” he said.

The group used a number of engineering and scientific disciplines in their approach, including polymer chemistry, polymer physics, chemical engineering, and materials science to tune and characterize block polymers in bulk and thin film geometries.

“Our goal was to show how a truly multidisciplinary approach can help solve problems in the development of next-generation materials--a development that requires simultaneous consideration of structure, properties and processing,” Epps said.

One approach the team took was to develop high-throughput and combinatorial computational methods to visualize nanoscale structures with relatively low-cost optical techniques, Epps said. This allowed the team—which also included two of his graduate students, Melody Morris and Thomas Gartner-- to minimize the number of samples that need to be measured with expensive techniques such as atomic force microscopy and transmission electron microscopy, he said.

The team also developed universal design rules to understand key factors linking surface characteristics to nanostructure formation, Epps said. These rules also can be used with different surface types and polymers and be applied for example to touchscreen technology, he said.

“These rules enable us to predict which polymers will work well with which surfaces, so, for example, we can create self-cleaning coatings that can resist fingerprint smudges on touchscreens,” Epps said.

Batteries are another area that can benefit from the work of Epps and his team, he said. Exploring new designs in block polymers can be applied to the development of better battery membranes and associated electrolytes for ion transport that avoid some of the explosion perils that have faced current lithium-ion chemistries, Epps said.

“We want to design these membranes so that we can achieve the same, or better, performance as current technologies while also reducing the potential for explosions and other catastrophic failures,” he said. “At the same time, we’d like to develop the ability to process these materials at lower temperatures and with decreased amounts of harmful solvents. In other words, we want to reduce defects and mitigate threats to the environment through control of fabrication.”

The work also has applications in lowering the cost of electronic design, Epps said. Another effort he’s leading is to do nanoscale patterning with block polymers as a low-cost alternative to lithographic approaches currently used in the fabrication of electronic devices.

Researchers published a paper on their work in the journal Macromolecular Chemistry.

Elizabeth Montalbano is a freelance writer who has written about technology and culture for more than 15 years. She currently resides in a village on the southwest coast of Portugal.