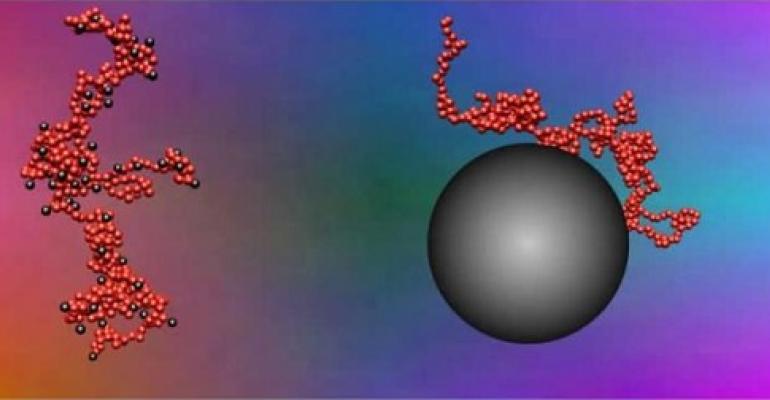 Researchers at the Department of Energy have discovered a surprising way to improve the properties of polymers by blending nanoparticles with polymer materials.

Researchers at the Department of Energy (DoE) have discovered a surprising way to improve the properties of polymers by blending nanoparticles with polymer materials.

A team of scientists led by the DoE’s Oak Ridge National Laboratory (ORNL) were studying the role of polymer structure, the interaction between nanoparticles and polymer, and nanoparticle size and shape on the structure, dynamics, and macroscopic properties of polymer nanocomposites, which are used in numerous applications.

Understanding these effects would allow the team—which also included researchers from the University of Illinois at Urbana-Champaign (Illinois) and the University of Tennessee, Knoxville (UTK) —to improve the design of new composite polymers, since they can tune mechanical, chemical, electrical, optical and thermal properties.

In particular, the team was trying to verify that shrinking the nanoparticle size would adversely affect the mechanical properties of polymer nanocomposites, but they learned something else entirely, according to Alexei Sokolov, a researcher from ORNL and UTK.

What researchers learned instead was not that an optimal nanoparticle size must exist, which is what they believed they would discover. Instead, they found that moving to really small nanoparticles enabled them to access totally new properties, Sokolov said.

“Now we realize that we can tune the mobility of the particles—how fast they can move, by changing particle size, and how strongly they will interact with the polymer, by changing their surface,” Sokolov said. “We can tune mobility of nanoparticles—e.g. their weight and size—and we can also tune the time of nanoparticle-polymer dissociation by tuning strength of their interactions.”

Both of these parameters affect macroscopic properties drastically, he said. “It was not possible to tune these parameters in the required range with larger nanoparticles, and this is probably the reason nobody actually tried it earlier,” Sokolov said.

The team’s work has a wide range of applications, showing a new way to control the properties of nanocomposites that are already widely used, he said. “We expect that this idea will be used by many researchers to develop various polymer nanocomposites for specific applications,” Sokolov said.

Scientists plan to continue their research by focusing on detailed studies of the role of nanoparticle mobility and the time of polymer-nanoparticle adsorption on macroscopic properties of composites to achieve unique properties that weren’t possible before, he added.

Elizabeth Montalbano is a freelance writer who has written about technology and culture for more than 15 years. She currently resides in a village on the southwest coast of Portugal.