In partnership with the Parley for the Oceans, an organization in which creators, thinkers and leaders come together to raise awareness about the disastrous state of the oceans and to collaborate on promising projects that can protect and conserve them, Adidas has created a concept sneaker that is entirely made of marine plastic.

Adidas, who committed earlier this year to recycling ocean waste into its products from 2016, presented the sneaker during a press gathering at the Parley Talks event, which was hosted by the UN in New York at the General Assembly Hall. 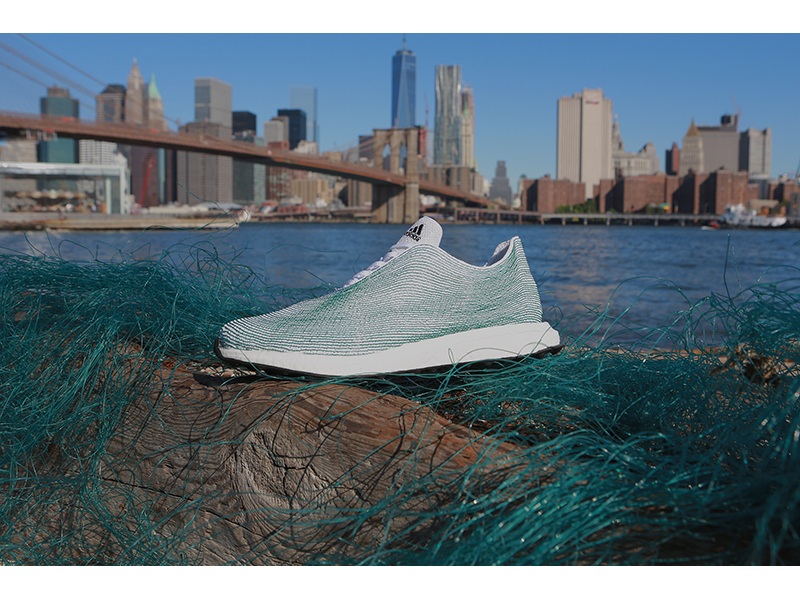 Adidas created a world first with a shoe upper made entirely of yarns and filaments reclaimed and recycled from ocean waste and illegal deep-sea gillnets. Parley partner Sea Shepherd retrieved these nets after a 110-day expedition tracking an illegal poaching vessel, which culminated off the coast of West Africa.

The gillnet was sent to the Warnerbabcock Institute for Green Chemistry in Wilmington, MA, where it was processed into small filaments and powder and extruded into filament using the institute's R&D extrusion equipment. The spooled filament was then sent for processing into the final sneaker products.

Cyrill Gutsch of Parley for the Oceans explained that the organization aims to boost public awareness about the plight of the marine environment. Collaborating with high visibility brands is a good way to achieve this.

“We are extremely proud that Adidas is joining us in this mission and is putting its creative force behind this partnership to show that it is possible to turn ocean plastic into something cool," he said.

To which Liedtke added: “Adidas has long been a leader in sustainability, but this partnership allows us to tap into new areas and create innovative materials and products for our athletes. We invite everyone to join us on this journey to clean up the oceans."

The concept shoe illustrates the joint commitment of Adidas and Parley for the Oceans and offers a first look at the kind of consumer-ready ocean plastic products that will be revealed later this year.