Bad for baby? BPA discussion rears its head once again, and this time it’s teethers

BPA or bisphenol A, as it is officially called, has been used to make certain plastics and resins - specifically, polycarbonate and epoxy resins – for over fifty years. The chemical has been the subject of debate for some time, as research has indicated that, when used in food contact applications, it can leach into food products. The jury is still out on the risks to human health.

Bisphenol-A (BPA), parabens and antimicrobials are widely used in personal care products and plastics – and that includes teething rings for babies. However, the effects of the infant’s exposure to these chemicals is largely unknown. There have been studies showing that in animals, endocrine-disrupting compounds (EDCs) -- which include BPA, parabens and antimicrobials -- can potentially interfere with hormones and have harmful developmental, reproductive and neurological effects.

This led the European Commission in 2011 to ban the use of BPA in baby bottles. The U.S. followed suit a year later, banning it from baby bottles, and also from children's drinking cups. Some manufacturers say they have started reducing BPA and other EDCs in additional products, even those not made for children.

To date, however, very few, if any, studies have investigated whether or not the compounds are used to make teethers, and if they are, whether they leach out of these products, which are designed to soothe babies' gums when their teeth come in. Now, researchers Kurunthachalam Kannan and colleagues have done a first-of-its-kind study that looked at both aspects. Their study was first published online and will appear in Environmental Science and Technology, a journal published by the American Chemical Society.

The researchers analyzed 59 solid, gel-filled or water-filled teething rings purchased online in the U.S. for 26 potential endocrine-disrupting chemicals. Although most of the products were labeled BPA-free or non-toxic, all of them contained BPA. In addition, the researchers detected a range of different parabens and the antimicrobials triclosan and triclocarban in most of the teethers. The study also showed that the compounds leached out of the products' surfaces into water.

Based on estimates of average use time and the body weight of a 12-month-old baby, calculations suggest that exposure to BPA and other regulated EDCs in teethers would be lower than the European standards for temporary 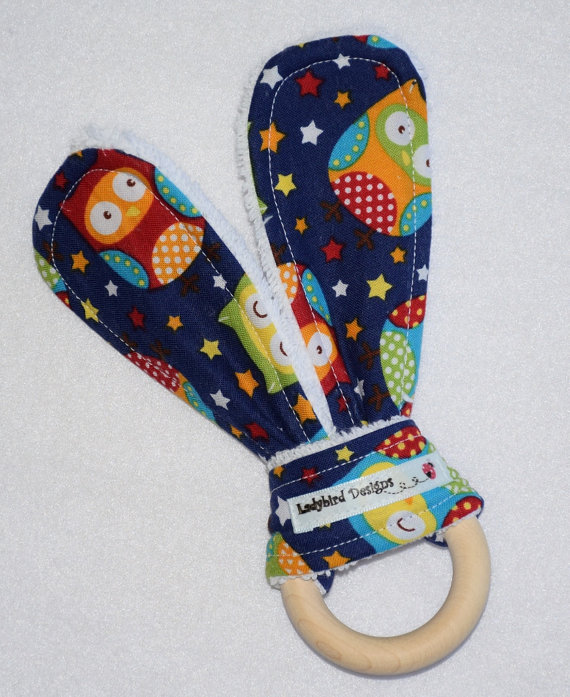 tolerable daily intake levels. However, these thresholds are set for individual compounds. Current regulations do not account for the accumulation of multiple EDCs, note the researchers. Additionally, not all chemicals measured in the study are regulated. The researchers say the findings could be used to develop appropriate policies to protect infants from exposure to potentially toxic chemicals currently found in so many plastic teethers.

And until then, there’s always an alternative: the bunny ears in the picture, for example, are made of cotton terry cloth which is equally, if not more effective for rubbing sore gums. And guaranteed BPA free!