Innovations
brought to you by 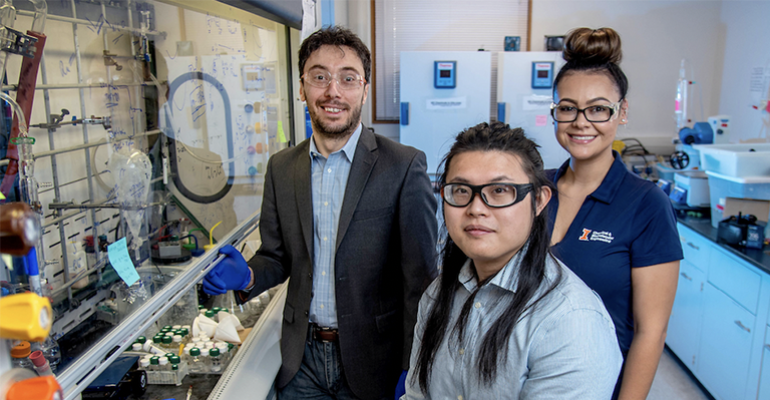 “The world needs more and better options for extracting the energy and molecular value from its waste plastics,” says co-lead author Susannah Scott, Distinguished Professor and Mellichamp Chair of Sustainable Catalytic Processing at UC Santa Barbara. “Turning polyethylene into propylene, which can then be used to make a new polymer, is how we start to build a circular economy for plastics.”

Conventional plastic recycling methods result in low-value plastic molecules, offering little incentive to recycle the mountains of plastic waste that have accumulated over the past several decades.

“We started by conceptualizing this approach and demonstrated its promise first through theoretical modeling — now we have proved that it can be done experimentally in a way that is scalable and potentially applicable to current industry demands,” says co-lead author Damien Guironnet, a professor of chemical and biomolecular engineering at Illinois. Guironnet published the first study outlining the necessary catalytic reactions in 2020 with Illinois professor Baron Peters.

A new study published in the Journal of the American Chemical Society announces a series of coupled catalytic reactions that transform PE, which is recycle code #2 (as high-density polyethylene, HDPE) and recycle code #4 plastic that make up 29% of the world’s plastic consumption, into the building block propylene. That’s the key ingredient to produce PP also known as #5 plastic that accounts for close to 25% of the world’s plastic consumption.

This study establishes a proof-of-concept for upcycling PE plastic with more than 95% selectivity into propylene. The researchers have built a reactor that creates a continuous flow of propylene that can be converted into PP easily using current technology — making this discovery scalable and rapidly implementable.

If just 20% of the world’s PE could be converted via this route, it could represent reduced GHG emissions comparable to taking 3 million cars off the road.

“Our preliminary analysis suggests that if just 20% of the world’s PE could be recovered and converted via this route, it could represent a potential savings of GHG emissions comparable to taking 3 million cars off the road," says Garrett Strong, a graduate student associated with the project.

The goal is to cut each very long PE molecule many times to obtain many small pieces, which are the propylene molecules. First, a catalyst removes hydrogen from the PE, creating a reactive location on the chain. Next, the chain is split in two at this location using a second catalyst, which caps the ends using ethylene. Finally, a third catalyst moves the reactive site along the PE chain so the process can be repeated. Eventually, all that’s left are propylene molecules.

“Think of cutting a baguette in half, and then cutting precisely-sized pieces off the end of each half — where the speed at which you cut controls the size of each slice,” Guironnet explains.

“Now that we have established the proof of concept, we can start to improve the efficiency of the process by designing catalysts that are faster and more productive, making it possible to scale up,” Scott says. “Since our end-product is already compatible with current industry separation processes, better catalysts will make it possible to implement this breakthrough rapidly.”

The work presented in this publication is highly complementary to a paper published in Science last week. Both groups used virgin plastics and similar chemistries. However, the Science team used a different process in an enclosed batch reactor, requiring much higher pressure — which is energy intensive — and the need to recycle more ethylene.

“If we are to upcycle a significant fraction of the over 100 million tons of plastic waste we generate each year, we need solutions that are highly scalable,” Guironnet says. “Our team demonstrated the chemistry in a flow reactor we developed to produce propylene highly selectively and continuously. This is a key advance to address the immense volume of the problem that we are facing.”

Dow researchers were also involved in this work. “Dow is taking a leading role in driving a more circular economy by designing for circularity, building new business models for circular materials, and partnering to end plastic waste," says Dow senior scientist and co-author Ivan Konstantinov. "As a funder of this project, we are committed to finding new ways to eliminate plastic waste and are encouraged by this approach."