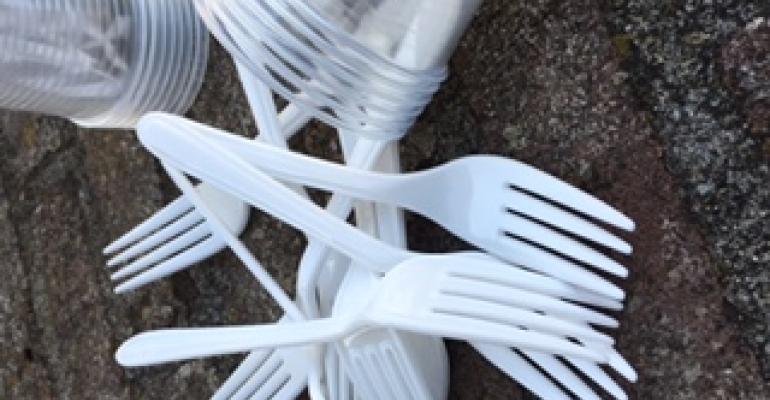 Bans are a well-known phenomenon in France. The country has, in the past, enacted legislation outlawing everything from burkinis, plastic bags and lion hunt trophies to supermarket food waste, the English word ‘hashtag’ and paid sex. And last week, the axe fell for plastic serviceware.

As my colleague Kari Embree wrote last week in her story “France bids adieu to plastic cups and cutlery”, France has imposed a ban on plastic single-use cups, plates, knives and forks throughout the country.  An exception is made for plastic tableware that is suitable for home composting and manufactured, wholly or partly, using bio-based materials.

And although the new law does not enter force until 2020, it has already succeeding in creating a stir, especially among packaging manufacturers. Stating that it infringes on both the EU’s rules on free movement of goods and, the packaging & packaging waste directive, Pack2Go Europe, the trade association representing European food and beverage service, and convenience packaging manufacturers, immediately announced it was challenging the new law.

However, Eamon Bates, the secretary general of Pack2Go Europe also argued that among other things, the ban "will be understood by consumers to mean that it is OK to leave this packaging behind in the countryside after use because it's easily bio-degradable in nature”.

Of all the arguments to put forward, this is easily the most infantile and least persuasive.

Mr. Bates actually had a good point when he said that finding good serviceware, that met today’s requirements regarding, for example, hygiene, and was also home compostable could pose a problem for consumers. Currently, most of the products made of biobased plastic materials are designed for composting at industrial facilities, not at home.

He could also have argued that home compostable biobased alternatives such as palm leaves or bamboo are sourced from overseas, which adds to their carbon footprint.

He could have emphasized that home compostable paper plates are manufactured using water-intensive non-ecological processes that have a considerable impact on the environment.

Conceivably, he could even have considered endorsing the idea, and instead of challenging the law, have announced that his association would work to develop better convenience food serviceware and products that can meet the requirements of both the new law and consumers.

But the notion that, if consumers know something is compostable they will automatically leave it laying around is an old and tired one.  Littering is not dependent on the material a product is made of, but on the people doing it. If we follow Mr. Bates’ line of reasoning, there shouldn’t be a litter problem at all: consumers know that plastic packaging, bottles, cups and plates are not ‘easily biodegradable in nature’ and throw them away in the countryside anyway. Not to mention city streets, lakes, festival sites, ski slopes, etc. etc.

It’s often said that plastics have revolutionized our daily lives, and it is very true. However, as we are gradually coming to realize, something has to change. Plastic, as a material, is unrivalled in the benefits it delivers. Plastic, as waste, is almost unrivalled in the problems it creates. Right now what we need is, literally, to clean up our act.

So is France on the right track with the new ban?

As the government puts it: “Preventing the production of waste, and more precisely waste from products manufactured from non-renewable materials, is one of the French government's priorities. The government has been committed to the circular economy since the environmental conference of September 2013, and …the legislator's decision … is entirely compatible with development of the circular economy.”

Sounds good to me.