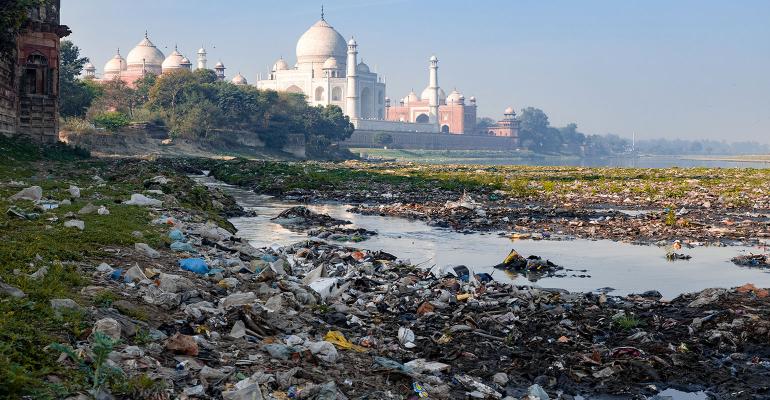 Funded by some of the world’s biggest oil and chemicals companies, Renew Oceans has failed to meet its goal of keeping plastic waste in the Ganges River from entering the ocean surrounding India.

The plastics industry has devoted tremendous resources to trying to solve the plastic waste challenge, even if anti-plastic activists are loath to recognize the efforts. Sometimes, though, the industry gives itself a black eye, as is seemingly the case with Renew Oceans. Funded by some of the world’s biggest oil and chemicals companies, Renew Oceans has failed to meet its intended goal of keeping plastic waste in the Ganges River from entering the ocean surrounding India.

According to a Reuters report, the “closure of Renew Oceans . . . is a sign that an industry whose financial future is tied to the growth of plastic production is falling short of its targets to curb the resulting increase in waste.” The Alliance to End Plastic Waste, a Singapore-based nonprofit group set up two years ago by Exxon Mobil, Royal Dutch Shell, Dow, Chevron Phillips Chemical, and about 50 other companies committed to spend $1.5 billion over five years on the alliance and its projects.

Reuters noted that the alliance has not said publicly how much money it has raised from its members or what it has spent overall. However, the alliance did confirm to Reuters that “Renew Oceans had stopped operating, partly due to the new coronavirus, which had halted some work.” The Alliance to End Plastic Waste and Renew Oceans declined to comment on the amount of waste the project actually collected. Published targets on Renew Oceans’ website were to collect 45 tonnes of plastic trash from the Ganges in 2019 and 450 tonnes in 2020.

The launch of the project in January 2019 was live-streamed by National Geographic, reports Reuters, and Dow CEO Jim Fitterling said, at the time, that Renew Oceans was “one of the best projects we’ve got.”

The project intended to use state-of-the-art technology to collect and recycle plastic waste, including reverse vending machines that take in plastic litter and give out vouchers for money off taxi rides and groceries, and pyrolysis devices to turn plastic trash into diesel. However, prototypes of those devices that were deployed in Varanasi, India, “regularly malfunctioned,” four people involved in the project told Reuters. “The alliance and Renew Oceans declined to comment on the performance of the technology,” said Reuters.

An article appearing in the February 12, 2019, National Geographic noted that “Renew Oceans is a part of the Renewlogy partnership, a brainchild of Priyanka Bakaya, who wanted to “do something positive for an environment increasingly strained by plastic waste.” Bakaya attended Stanford University, where she learned about environmental entrepreneurship. She then attended business school at MIT and in 2009 founded PK Clean, named for her late mentor in Australia (where Bakaya grew up), whose formulas for converting waste into fuel were never published. A video embedded in the article shows Bakaya explaining the technology and process.

I reached out to Bakaya to get an update on her various projects in North America, such as the Salt Lake City facility and the PK Clean Technologies plant in Chesterton, Nova Scotia, built in cooperation with Sustane Technologies Inc. I also inquired about the City of Phoenix announcement regarding a contract with Renew Phoenix as a joint venture with Generated Materials Recovery using Renewlogy’s pyrolysis technology (announced two years ago).

Bakaya, whose latest press release in December 2020 said she was going to India, responded that Renewlogy has pivoted since the end of 2019 to focus on plastic-to-plastic rather than plastic-to-fuel, and is in the process of taking what it has developed in Salt Lake City to its new facility in Phoenix.

As an industry journalist, I receive many press releases from companies involved in “solutions” to the plastic waste problem. However, most of these press releases involve investments and grants or contracts with global brand owners for the resulting materials that potentially will be produced. I keep hoping that someday soon I’ll start receiving press releases telling me how many millions of tons of plastic waste a company actually has converted into valuable chemicals and reprocessed plastics. Calls to both Sustane and Generated Materials Recovery for comment and updates on the progress of these projects were not returned.

It’s no wonder that global organizations whose missions include trying to clean up plastic waste from the environment and anti-plastic activists are losing patience with the plastics industry’s efforts. Huge amounts of money are being dumped into various solutions with very little to show for it.

Reuters reported last October that the plastics industry “has been publicizing its efforts to recycle and manage plastic waste, but it is spending vastly more on expanding production than recycling, which has been rendered uneconomic by the proliferation of cheap new plastic.”

I would add that the industry is also experiencing a proliferation of expensive solutions, many of which are uneconomical to produce at scale to make any significant dent in the millions of tons of plastic waste in the environment. It would seem, however, that for these global consumer goods companies and brand owners who keep sinking money into many of these projects, hope springs eternal.