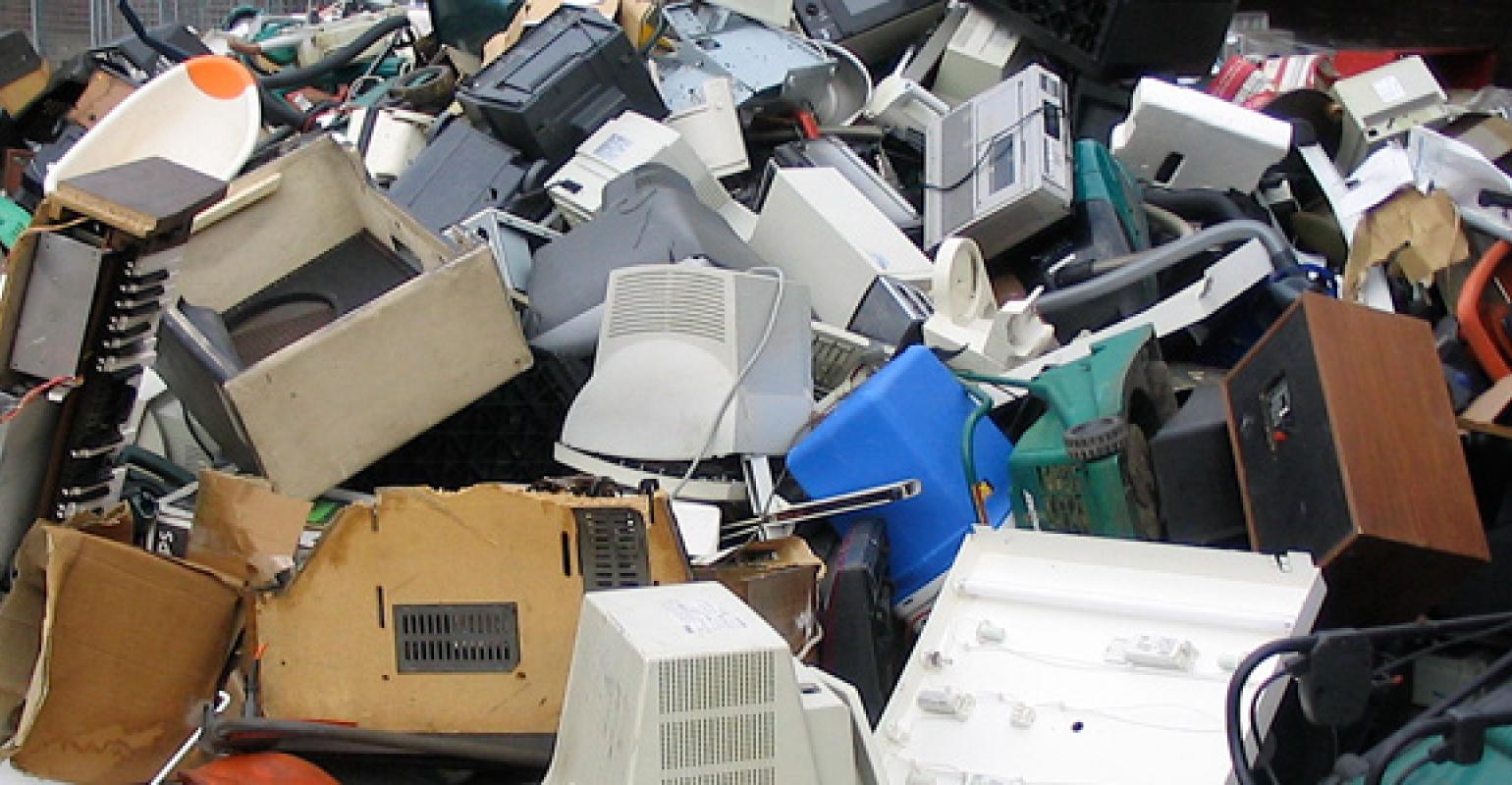 The best disposal route for waste plastics has long been a subject of intense debate. Now, Keith Freegard, of UK-based plastics recycler Axion Polymers is calling for a re-think on the merits of the numerous energy from waste plants operating across Europe and in the UK. Municipal solid waste (MSW) and mixed recyclables processing facilities supply the mixed material refuse-derived fuel bales burned at the plants – bales consisting of, among other things, post-consumer plastic waste.

As Freegard writes: “Further waste-to-energy plants are being planned and built in the UK, while landfill is frowned upon as the accepted ‘worst option’ for disposal. Revisiting the decision-making metrics that have led to this ‘accepted waste hierarchy’ might point to a stark choice between the two waste disposal options.

There are valid arguments for the ‘pros’ and ‘cons’ of both waste disposal methods. But what if the true environmental cost of CO2 emissions were also factored into deciding the ‘best option’?”

Freegard points out that existing designs of waste-to-energy incinerators are a compromise engineering solution. The non-homogeneous nature of the waste fuels requires robust moving-grate burners to move the combustibl 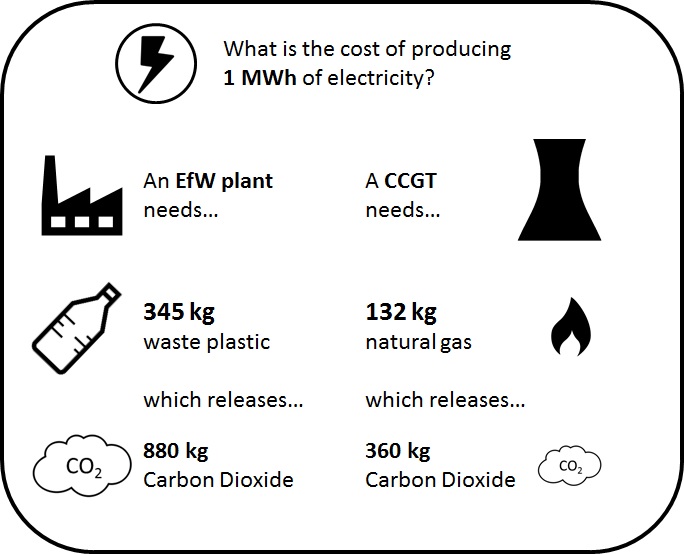 e materials through the unit. Water-filled side boilers must be used for heat transfer to capture the heat-energy produced. High-efficiency, combined cycle gas turbine systems are far more efficient at energy recovery, although, as Freegard notes: “Both power generating units are ultimately doing the same task: converting carbon-rich fuels into electricity (and occasionally combined with ‘useful-heat’ production), while sending atmospheric-polluting carbon emissions up the exhaust stack as a major environmental cost associated with the beneficial electrical power supplied into the local grid.”

So what are the solutions? High-efficiency gas turbines are a much more efficient way to generate each kilowatt of power, plus some heat, from fossil fuel sources if measured in terms of the mass of CO2 released per unit of power output.

However, large scale waste-burners consume huge tonnages of waste materials that would otherwise have been landfilled. However, nearly a third of this input waste volume ends up as residual incinerator bottom ash (IBA). This begs the question: where does all that IBA tonnage end up?

If the major components in the infeed waste fuel mix to a modern EfW unit are renewable carbon, such as wood, papers, cardboard or organic matters, then the ‘short-life’ carbon atoms released back into the atmosphere via the exhaust stack are ecologically balanced with their earlier carbon-capture in a tree, plant or living organism. So this fraction of the waste ‘fuel’ shows a carbon-neutral effect.

As for the plastic content in residual household or commercial waste, the carbon-rich molecules that create the long-chain polymers (e.g. ethane, propane, styrene, etc.) are derived from crude oil refineries and are then polymerised to make plastics. Burning these is essentially the same as driving a petrol car or taking a flight – power created at the ‘expense’ of long-life carbon release.

But what if the waste plastic could be separated from the ‘organic or renewable carbon’ wastes and the ‘inert’ carbon-rich, stabilised plastic stored either in the ground or in a covered storage system. That would represent a long-term carbon-sink and remove those fossil-based materials from the energy-from-waste infeed mix. Clearly it would be better to recycle these materials if a technically and economically viable process were available to do that.

Because a typical energy-from-waste plant has efficiencies of up to 30% for converting feed material into electricity compared to about 50% for a Combined Cycle Gas Turbine, 1 MWh of electricity from a CCGT produces just 40% of the CO2 emissions for the same energy from plastic incinerated at an EfW plant. And, writes Freegard, while a best-in-class EfW plant with integrated heat recovery can recover a further 35%, this heat could instead be generated by a gas boiler that has an efficiency of at least 90%. Even taking this additional efficiency into account, a combination of CCGT and boiler still emits about 65% of the CO2 of the leading EfW plants.

He argues that based on the CO2 metric alone, it makes more sense to bury large amounts of plastic in a long-term ‘carbon sink’ in the ground and efficiently combust natural gas to satisfy our immediate power needs. Freegard: “However, until world leaders are prepared to transform the taxation on fossil fuel use in a way that truly reflects the high cost of ‘free carbon release’, then this numeric analysis remains an esoteric academic study.

Perhaps we should start calling this form of end-of-life waste treatment ‘sky-fill’ to compare it with the alternative ‘land-fill’ disposal route for carbon mass?” 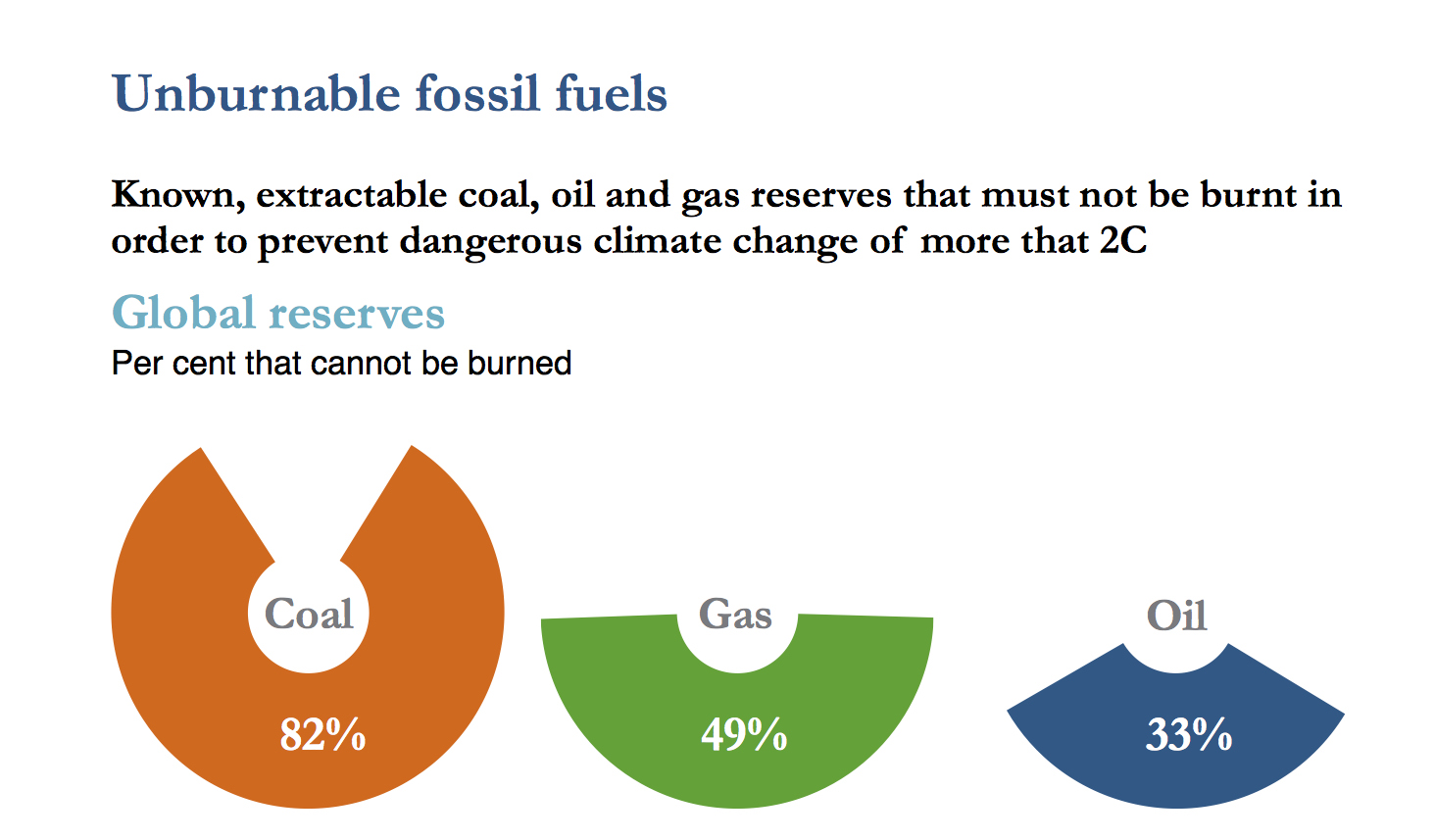 privately-owned) reserves of oil, gas and coal already available for extraction and combustion will have to stay in the ground as part of tackling climate change and achieving the goals of the Paris Agreement, which included taking action to hold temperature rises to well below 2C above pre-industrial levels and stabilizing emissions at a level which would see a temperature rise of no more than 1.5C.

In his view, the solution in a Carbon Tax; particularly on the creation of electrical power and directly linked to the tonnes of CO2 released into the atmosphere per unit of fossil carbon consumed.

If that happens, it might be the time to return to that ‘mine’ of carefully stowed thousands of tonnes of good plastic and look at the economics of turning it into new polymer. With a huge carbon tax slapped on burning it, then the economics would probably work. So these plastics may not have to stay in the ground for too long.

We need to be more aware of the “wholesale damage of completely uncontrolled burning of fossil fuel”, Freegard concludes.

“The short-term political and economic viewpoint is that ‘we’re getting some electrical power from it so it must be a good thing to do’. But this I think reflects the market failure created by very high landfill taxes that are not balanced by an equivalent taxation method to discourage ‘sky-fill’.

It’s a complex and challenging issue that reaches out over the next 20 years; a critical period in our history. Until we get a carbon tax that puts some seriously big pound notes on the cost of throwing carbon into the atmosphere, I don’t see there being any real change. After all, the Earth doesn’t have a bank account – it’s us humans who operate under that monetary metric.”