Many of you may know them as the ‘90s alternative rock band from Seattle with an impressive string of #1 hits in their repertoire—nearly 32 million records sold in the U.S. and an estimated 60 million worldwide—however, what you might not know about is Pearl Jam’s long history of dedication to the environment. In 2011, Pearl Jam was named 2011 Planet Defenders by Rock the Earth for their environmental activism and their large-scale efforts to decrease their own carbon emissions.

Many of you may know them as the ‘90s alternative rock band from Seattle with an impressive string of #1 hits in their repertoire—nearly 32 million records sold in the U.S. and an estimated 60 million worldwide—however, what you might not know about is Pearl Jam’s long history of dedication to the environment. In 2011, Pearl Jam was named 2011 Planet Defenders by Rock the Earth for their environmental activism and their large-scale efforts to decrease their own carbon emissions. Now as a special gift to dedicated fan members of the band’s hugely popular club, the Ten Club, Pearl Jam and Green Dot (Cottonwood Falls, KS) have partnered up with Sea-Lect Plastics (Everett, WA ), a custom injection molding company, to create a biodegradable luggage tag manufactured in the Seattle scene.

“It is exciting to work with artists and craftsmen who appreciate all aspects of a product’s design. Those outside the plastics industry especially value new materials that make their designs more meaningful. Plastics can be hip,” said Green Dot CEO Mark Remmert to PlasticsToday. 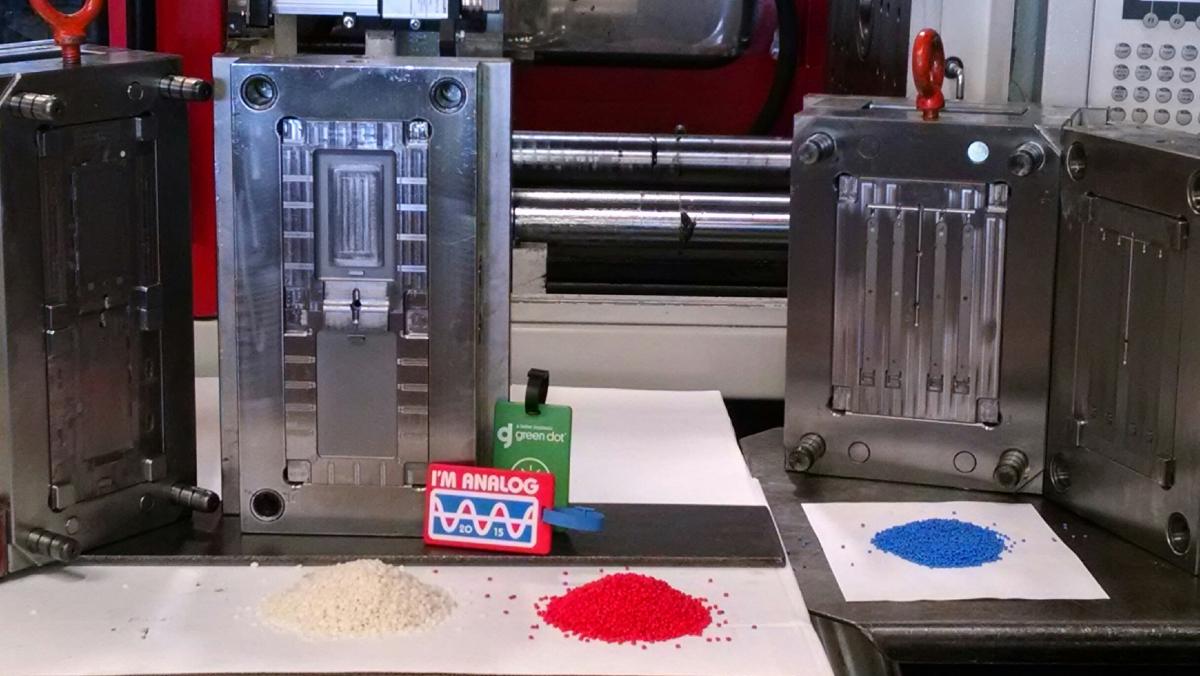 Green Dot is a full service bioplastics company dedicated to meeting the growing demand for biobased and compostable materials. They offer a full line of biobased and biodegradable plastics made from renewable, reclaimed and recycled materials. From furniture made from reclaimed wood-fibers and recycled plastic, to soft plastic iPhone cases that will biodegrade in a backyard compost, Green Dot helps make products that allow consumers to contribute to a more sustainable world.

Green Dot designed the bioplastic luggage tag exclusively for Ten Club members to be able to withstand the rigors of a worldwide tour, and when their useful life has ended, the materials can be returned to nature.

From design to manufacturing

It all started out with the luggage tag design. Once that was decided upon, the sample part was made with a silicone molding process commonly used in Asia. Sea-Lect’s challenge was to re-engineer the part so that it could be injection molded. To minimize cost, the first design used a simple snap together feature. Tim Bierman, head of Pearl Jam’s Ten Club, who is also in charge of merchandising for the band, liked the concept, but commented that the snap feature was too simple. To remedy this, the pass cores were swapped out with lift cores. This increased the mold cost a tad, but the resulting part was much cleaner.

After the design was signed off on, Green Dot and Sea-Lect began to evaluate which material thickness and hardness was needed to allow for enough stiffness to make the snap feature functional, but still keep the part light and durable. To get a better understanding of the performance of the product, Sea-Lect made a 3D-printed prototype out of a soft PolyJet resin at a 90 shore A hardness. Going off the prototype, Green Dot formulated a biodegradable bioplastic to meet the physical attributes required. The material was approved and sent to make masterbatch resins to color the parts.

After the first molded samples were received from the toolmaker, some minor changes were quickly made to the snap feature before the molds were delivered to Sea-Lect. Because the material was new, not a lot of process information was available. In the early stages, the tag parts were cracking and warping badly. To remedy this problem Sea-Lect experimented with the material and mold temperature and dialed in the process at a longer cycle time.

“Overall I think the whole process went very well,” said Matt Poischbeg, Vice President and General Manager of Sea-Lect Plastics. “Getting the right material and color concentrate took most of the time. Since the material is relatively new and some of the ingredients are of organic nature, predicting the outcome was difficult and needed to be validated bytesting.” 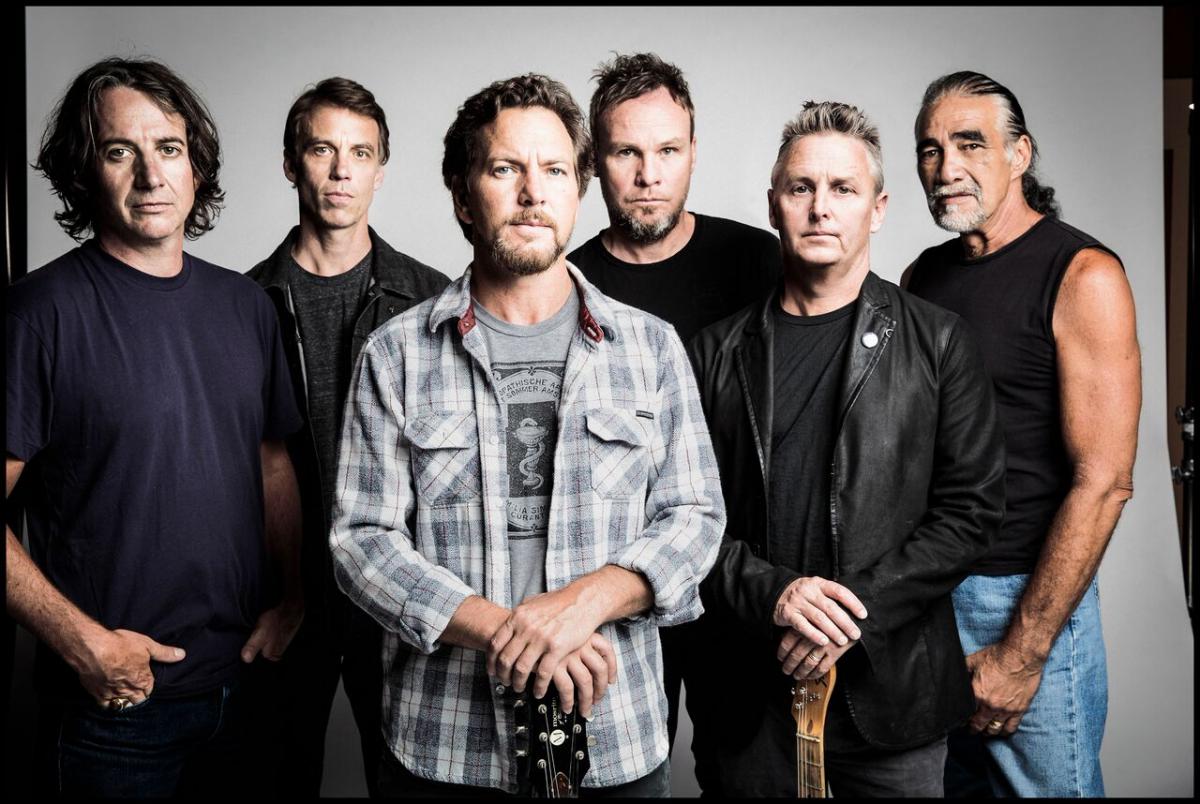 Stone Gossard, guitarist for Pearl Jam spoke to the importance of not filling landfills with goods that could be made using smarter materials. “The need for better, compostable plastic goods is just so evident,” he said. “And it’s amazing that the materials already exist. We’re just marching against resistance to implementation at this point.”

Bierman added, “We’ve always been an organization that has provided unique merchandise items to our fans,” he said. Bierman added that, for the band’s hardcore followers who often travel to multiple shows on a given tour, luggage tags were both a functional gift and an acknowledgement of the band’s ideals.”

“Green Dot is science-based, style driven, and socially conscious,” adds Remmert. “We’re here to help designers and manufacturers lighten the environmental impact of their products. This project epitomizes everything that’s important to us. Making it locally is the icing on the cake.”

Gossard hopes that Pearl Jam’s process can lead to more widespread efforts on behalf of companies for taking into account their environmental impact.

“If every company was motivated, and was rewarded by their consumers for acknowledging and mitigating their carbon output—using a variety of strategies, whether they be new technologies, investment in green energy, restoration of marginal lands, whatever strategy it is—I think it could be a powerful way of acknowledging what we’re doing to the planet.”

Green Dot has published a case study of the project available on their website.