HomeSustainabilityIs There Something Fishy Going on at Ocean Cleanup?
Recent
Sustainability
Springfield Plastics Announces Major Expansion
May 27, 2022
Resin Enables Cost-Effective Impact Modification with Lighter Elastomer Load
May 27, 2022
PPS-Polyamide Tubing Offers High-Temp Option for Cooling Lines
May 27, 2022
The End of the Extrusion Line Is Where Savings Begin
May 26, 2022
Single-Use Endoscope Technology Earns New Accolade
May 26, 2022
Bioplastics News Stream
May 26, 2022
Breaking News in Flexible Packaging
May 26, 2022
Rehau Group Pulls Out of Russia
May 26, 2022
Ocean Plastic
brought to you by

Is There Something Fishy Going on at Ocean Cleanup? 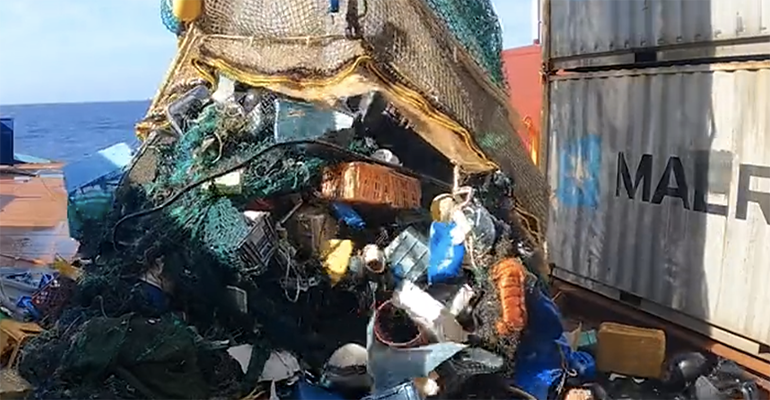 Plastic waste recently hauled from the Great Pacific Garbage Patch looked suspiciously clean and devoid of barnacles and algae, according to some regions of the Twitterverse.

Desktop sleuths noticed something unusual in a video that environmental organization The Ocean Cleanup posted on Twitter on Feb. 14, 2022. The plastics netted from the Great Pacific Garbage Patch on Feb. 5 looked clean — too clean, in fact, to have been floating on the ocean for several years. Also, the colors were vibrant and there were no visible organisms, such as barnacles or algae, growing on it.

Here's the footage of another 3810kg catch from the Great Pacific Garbage Patch on February 5th. Next extraction is scheduled today. ✔️ pic.twitter.com/DSx0kxPWEF

That caught the attention of people like oceanographer Clark Richards, PhD. For the sake of comparison, he re-tweeted pictures of “heavily fouled” trash found in the North Pacific by Dr. Melanie Bergmann.

This is what years-old trash looks like in the middle of the Pacific. Or, at least *some* of it should look like this. The Ocean Cleanup has some explaining to do. https://t.co/EM0eqUb8yP

“This is what years-old trash looks like in the middle of the Pacific,” wrote Richards. “Or, at least *some* of it should look like this. The Ocean Cleanup has some explaining to do.” Which it did in a follow-up tweet.

Why no biofouling? A combination of an oligotrophic waters (=little nutrients) and UV killing the fouling. When we do see fouling it’s in parts of objects that are permanently in the shade, away from UV rays.https://t.co/UWhQeeHmyj pic.twitter.com/zx3wJSBfc5

The absence of biofouling — growth of the aforementioned organisms — is attributed to a “combination of an oligotrophic waters (= little nutrients) and UV killing the fouling,” commented Ocean Cleanup founder and CEO Boyan Slat. “When we do see fouling it’s in parts of objects that are permanently in the shade, away from UV rays.”

In its report on the controversy, Newsweek spoke with Ocean Cleanup and gleaned the following response from a spokesperson, who elaborated on Slat's comment. “The Great Pacific Garbage Patch is what is known as 'oligotrophic,' which means it is very low in nutrients. There's a reason these subtropical gyres — where we are currently busy catching plastic — are also called the 'deserts of the sea.' Nutrients typically come from rivers or from the upwelling of deeper waters. However, these gyres are far away from land and dominated by downwelling of water, not upwelling. This means that very few nutrients reach these gyres, resulting in less algae growth and plastic that remains relatively clean in appearance." The spokesperson also drew a comparison with buoys, which have a relatively pristine surface above water but are covered in barnacles underneath.

But some in the Twitterverse aren't buying it.

It defies our experience from every ocean gyre voyage we've taken over 15 years (see photo). We've reached out to Ocean Cleanup for more information! pic.twitter.com/sctJLPNLkl

In addition to the cleanliness of the waste plastic, some also questioned the haul's content, which seemed to be exclusively composed of plastic. It’s true that plastic, unlike some of the other waste that ends up in the ocean, floats. But still.

Ocean Cleanup was founded in 2013 by then-18-year-old Boyan Slat in Delft, Netherlands. It harvests waste plastic from ocean garbage patches, which is then recycled, and it has developed a solar-powered Interceptor to capture plastic waste from rivers before it reaches the ocean. The non-profit’s goal is to reach a 90% reduction of floating ocean plastic by 2040.