Throwback Thursday: A brief history of the drinking straw 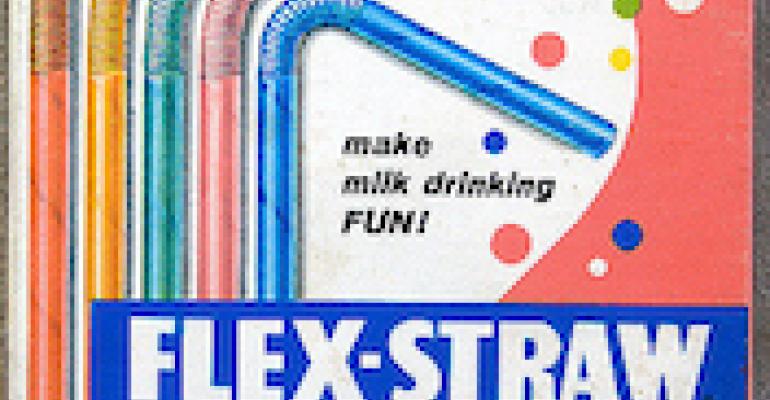 As iconic brands, cities and even countries join the crusade to “stop sucking” and ban plastic straws, let's take a trip down memory lane and explore the evolution of drinking straws. Our journey begins a few thousand years ago with the Sumerians.

The days when we will be able to sip a “tasty beverage” through a plastic straw seem to be numbered.

Iconic brands, cities and even countries—the European Union plans to ban plastic straws by 2021—have joined the crusade to “stop sucking.” And you know the battle is irredeemably lost for those of us on the other side of the plastics barricades when Disney jumps on the bandwagon: The Walt Disney Co. announced on July 25 that it would ban plastic straws from all of its resorts, theme parks and attractions by mid-2019.

There has been some pushback on the ban, notably from the disabled community, where straws can be a lifesaver. Critics of the movement to rid single-use plastics from our lives also note that plastic straws, in the grand scheme of things, are not the Great Satan. Activists retort that straws are a “gateway issue to help people start thinking about the global plastic pollution problem,” Plastic Pollution Coalition CEO Dianna Cohen recently told Business Insider. "They've been designed to be used for a very short amount of time, and then be tossed away," she said.

Like the plastic bag ban that swept through supermarkets, the plastic straw ban has taken on a momentum of its own. Banning the ban is probably not a battle worth fighting, frankly. And I have to say that environmental activists have some points. I was astonished to learn that Americans use 500 million drinking straws every day, according to statistics referenced by the U.S. National Park Service.

The question, then, is what do we replace them with? Paper, glass and stainless-steel straws all have their drawbacks, as Clare Goldsberry explained so well in her blog post, “Paper straws are becoming ubiquitous from the mainland to the islands.” In that article she also profiles a company that has developed a reusable plastic straw, the Tfees straw, which is injection molded from Eastman’s Tritan co-polyester material. It’s dishwasher safe and transparent, so that you can visually verify its cleanliness. It would seem to be a good, bipartisan solution, unless you’re an ideological purist. “In trying to market her product to various restaurants and bars, she is being told that they are going ‘plastic free,’ which means they can’t use her reusable plastic straw, even though it’s an ideal alternative to a paper straw,” writes Goldsberry.

You can’t win. But let’s have a bit of fun, anyway, and fire up Mr. Peabody’s Wayback Machine to learn about the evolution of the drinking straw.

The earliest known drinking straw, according to some historians and archeologists, was found in a Sumerian tomb from 2000 to 3000 BC. Made of gold and precious stones, the straw probably was used to drink primitively fermented beer, in which solid byproducts sank to the bottom and the drinkable fluid floated on top. We’ve made some advances in brewing beer since then, but three-star Michelin restaurants that provide straws to diners—there must be some, right?—might take a page from the Sumerians’ book if they decide to go plastics free and up their prestige in one fell swoop.

Next: Flash forward to 1880 and the invention of the paper straw.

Legend has it that Marvin Stone was drinking a mint julep on a hot summer day in 1880 when the straw, made of rye grass, started to disintegrate. An entrepreneur who had some success with his invention of a paper cigarette holder, Stone wrapped strips of paper around a pencil, glued them together, and soon had an early prototype of paper drinking straws.

"He patented his design in 1888, and by 1890, his factory Stone Industrial . . . was mass producing them,” explains an article, “A Brief History of How Plastic Straws Took over the World,” published in National Geographic.

In the 1930s, serial inventor Joseph B. Friedman was watching his young daughter, Judith, struggle with a straw as she tried to sip a milkshake at a soda fountain in San Francisco. There had to be a better way, thought Friedman.

Writing for the Atlantic, Derek Thompson describes what happens next in “The Amazing History and Strange Invention of the Bendy Straw.” “Friedman inserted a screw into the straw toward the top. Then he wrapped dental floss around the paper, tracing grooves made by the inserted screw. Finally, he removed the screw, leaving an accordion-like ridge in the middle of the once-straight straw. Voila! He had created a straw that could bend around its grooves to reach a child's face over the edge of a glass.”

Freidman established the Flex-Straw Co. in 1939. Soda fountains were not his first customers, however. That distinction rests with hospitals, where patients were still using rigid, not to mention breakable, glass tubes. “Nurses realized that bendy straws could help bed-ridden patients drink while lying down,” recounts Thompson. “Solving the ‘Judith problem’ had created a multi-million dollar business.”

Starting in the mid-1950s, plastic straws began to replace paper versions at warp speed, and fast-food culture played a fundamental role. Plastic straws were cheap, durable and they would not tear apart as you pushed them through the crosshairs of to-go cups, also made of plastic. Still, accidents will happen, as seen below.

In terms of the modern era, at least, we seem to have come full circle, as paper straws are now touted as a sustainable alternative to plastic straws. There's plenty to be said about that on a scientific and technological level, but that is an article for another day.