When Marieke Havermans’ mother-in-law died, the family was given a catalog to browse through by the funeral home from which to choose the casket they wanted. “Each and every one of them was basically dark, ugly and too expensive. For the most part, they were made of particleboard that was lined with leak-proof paper—which was not what we were looking for,” she said. “Particleboard is a cheap construction material that emits formaldehyde. There’s no dignity in particleboard.”

When Marieke Havermans’ mother-in-law died, the family was given a catalog to browse through by the funeral home from which to choose the casket they wanted. “Each and every one of them was basically dark, ugly and too expensive. For the most part, they were made of particleboard that was lined with leak-proof paper—which was not what we were looking for,” she said. “Particleboard is a cheap construction material that emits formaldehyde. There’s no dignity in particleboard.” 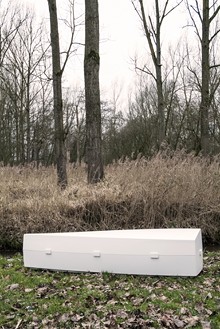 Havermans was convinced that there had to be a better way. Her idea was simple: “Why not design a sustainable casket made of a natural bioplastic that would, in time, simply biodegrade? A casket that would not only impact less on the environment, but that would also be an attractive and affordable option for everyone,” she explained.

As a packaging expert—“a casket is basically just packaging”—she had the technical background needed to develop the concept she had in mind into an actual product. When her market research revealed that not only was the general response to the plan positive, but also that caskets were not yet being made from bioplastic, Havermans decided to go for it. She resigned from her job and started her company, Onora (Hertogenbosch, the Netherlands), in 2012, funded by an investor who believed in the project, a crowdfunding campaign and the proceeds from three awards, including, somewhat surprisingly, one from a Dutch women’s magazine that liked the idea.

Since then, the idea has matured into a full-fledged product: an ecological casket made of 100% biological materials that will decompose via natural processes in the ground within a period of some 10 years. The casket has a 50% lower environmental impact compared to conventional coffins, and a 20% lower impact than the ‘eco’ caskets on the market today. And for those who prefer cremation: the casket will burn cleanly, reducing toxic emissions by up to 75% compared to conventional caskets.

The caskets are made of a purpose-designed bioplastic—a natural fiber-filled PLA-based compound that is completely biodegradable. They are the biggest single products ever made completely from bioplastic. “Developing the material was a major challenge,” said Havermans.

“There were very few materials that could meet the technological needs of my project. We tested a great many compounds, first on smaller products and then on larger ones before we finally got it right.”

The caskets are injection molded on a KraussMaffei machine with a clamping force of 3000kN; the two, gigantic molds, one for the lid and one for the coffin itself, were developed in Germany and built in China.

The casket is basically a thin-walled container with reinforcing ribs and stiffening features that can accommodate up to 150 kg of weight. Moreover, this structure means that far less material is needed to produce the coffin, which helps to keep the costs down. Because the coffin is injection molded, not only can features such as grips be integrated in the design, fasteners, such as screws, and adhesives are also unnecessary.

According to Havermans, the casket has a ‘soft’ design, with rounded corners and an organic form: “based on a cocoon,” she said. The coffins come with an organic, hemp matrass and pillow made of hemp fiber, an eco-cotton sheet and, if desired, a blanket made of ecological Dutch wool. “Also, more models will become available in the future,” said Havermans. “The bottom half of the casket is standard, but we will be able to vary the details on the lid, personalize it, using different colors. We want to build a brand, facilitate sustainable funerals, and even extend the product range with urns.”

Commercial production is scheduled to begin at the end of this month. Havermans has partnered with two parties in the funeral business, one in the Netherlands and one in Belgium, who will distribute the caskets. Also, a major insurance company has also signed on to the project.

Marieke Havermans has no doubt that the caskets will sell. “The time is right,” she said. After all, the population is aging and there’s a need for our product. But most important, people really like the idea of an affordable, environmentally-friendly casket.”