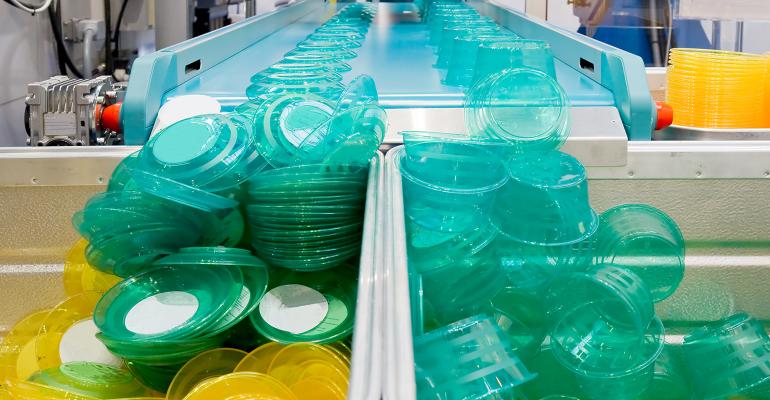 The report from activist organization As You Sow argues that a global transition to a true circular economy model is the only path to salvation. The American Chemistry Council pleads for more nuance in the debate.

Investors be warned! The petrochemical industry will soon fall victim to “shrinking demand from the power and transportation sectors,” which should have investors asking themselves whether “relying on high-demand growth assumptions for plastics and other petroleum-based products will pay off.” That summary is the basis for a new report released by As You Sow, an activist organization whose efforts include eliminating fossil-based plastics and other petrochemicals due to their “significant climate footprint” and the waste challenges of single-use plastics. The report, “Plastics: The Last Straw for Big Oil? An Investor Brief on the Risks of Overinvestment in Petrochemicals,” details the future of the petrochemical industry, and concludes that plastics are not part of it.

“This outlook has several implications worthy of scrutiny from investors, including that the largest segment of demand growth will occur in plastic packaging that is predominantly single-use and that the profitability of new plastic resin production in the US is substantially reliant on exports,” said the report. To combat the unsustainable linear plastic economy, a global transition to a circular economy model is coming into focus that promises to limit the amount of plastics produced and “reduce dependence on fossil fuels in an economically and environmentally responsible way,” says the report.

The report concedes that there is no “silver bullet” solution and action is “required across a variety of pathways, including potentially controversial ‘advanced’ recycling technologies and bioplastics.” The largest drivers of the “System Change” scenario are achieved through “elimination, reuse, and substitution with alternative materials.” Consumer demand for more sustainable products is counted as another driver toward the circular economy model, with studies showing that up to 70% of consumers would be willing to pay more for sustainable packaging. The report also notes a number of NGOs, such as Break Free From Plastic, and other grassroots movements are applying pressure on brand owners to reduce the amount of packaging used as well as incorporating more recycled plastic.

As You Sow’s report also has little good to say about the response of the plastics industry to the challenges of waste in the environment. It questions what the industry is doing — is it actually progress or just greenwashing? — and notes that industry’s promotional campaigns push only the benefits of plastic, “not its problems.” The problems, according to the report, include mechanical recycling, advanced recycling, and materials such as bio-based plastics, where questions remain as to their actual benefit given the limitations of these materials.

Bioplastics a distraction, not a solution

Without significant intervention — such as a plastic tax, bioplastics subsidies, the willingness of consumers to pay a bioplastic premium — bioplastics will continue to struggle to be competitive with fossil-derived plastics, raising concerns that they are more of a distraction than a solution, said the report. “Additionally, a high level of scrutiny is still needed to evaluate the true circularity of these bioplastics — land-use change emissions, competition with other agricultural resources, environmental impact assessments, and feasibility of industrial composting all remain in question.”

Chemical recycling consists of a wide range of technologies that are in the early stages of development, including conversion processes such as pyrolysis and gasification. While some of these advanced recycling technologies are “theoretically possible,” it is “widely recognized that only a fraction, if any, of pyrolysis products are suitable to produce new plastics,” according to As You Sow.

The report details the failures of mechanical recycling to truly address the plastic waste challenge, with much research highlighting the “state of the broken recycling system. . . . Chemical or ‘advanced’ recycling has been pushed by industry groups like the American Chemistry Council and Chemical Recycling Europe as industry’s silver bullet.” However, the report calls this “hype” and ultimately concludes that the only acceptable recycling is one that is truly circular.

“As our standards for sustainability and the world’s population grow, we’ll need more plastics to live better and with a lower carbon footprint — not less,” Baca added. “The US is positioned to be a leader in plastics production, with high standards for environmental protection, efficient sources of raw materials, and good-paying jobs for people in our communities.”

The Plastic Solutions Investor Alliance, launched in 2018 by As You Sow, has 50 investor members with a total of $2.5 trillion in assets under management and is now ramping up pressure on companies within the plastics supply chain to make meaningful commitments to materialize the transition to a circular plastic economy, said As You Sow. The organization along with other investors are engaging with major consumer goods companies seeking commitments to significantly cut absolute plastic used to reduce growing risk to their brands and value. Companies are responding and differentiating themselves by taking steps to address such investor concerns.