When Hurricane Katrina swept over New Orleans, it destroyed two warehouses owned by Transportation Consultants, Inc. (TCI). TCI was founded in 1983 by Jack Jensen Jr. when he recognized the need for trucking and warehousing in New Orleans. What began as a one-truck shop has evolved into a company with several U.S. locations.

TCI was founded in 1983 by Jack Jensen Jr. when he recognized the need for trucking and warehousing in New Orleans. What began as a one-truck shop has evolved into a company with several U.S. locations.

Instead of wiping their hands of New Orleans after Katrina, the family-run company decided to stick it out in the city it calls home. 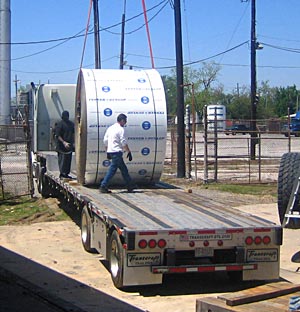 "We started to look to bring a new market to New Orleans," Christian Jensen, president of TCI, told PlasticsToday. "After a good review, we found there wasn't a packaging facility in the New Orleans market after Hurricane Katrina."

Part of TCI's intention was to recapture some of the cargo that has gone to Houston, TX and Mobile, AL. The company formed a new subsidiary, TCI Packaging, to package and export polyvinylchloride (PVC) resin powders to overseas markets.

The company embarked on a three-phase project, which started with TCI's procurement of 27 acres of undeveloped, unimproved property from the Port of New Orleans in 2008. During that transaction, TCI invested $10 million to secure the acreage, a container cargo handling facility and a 150,000-ft2 facility for warehousing and TCI's national headquarters.

According to the company, by the end of 2011, the initial investment will have resulted in approximately 60 direct jobs in addition to increased port activity and revenue, which is the result of more than 10,000 20-ft equivalent units (TEU) transitioning from outside ports to the Port of New Orleans annually.

Likewise, the expansions will provide an additional 20 direct jobs and are projected to produce more than 300 indirect industry related jobs.

This expansion became the perfect platform for the company to enter the form-fill-seal packaging market, a natural extension of their warehouse and shipping services. TCI became the first company in North America to bag PVC powderwith fully automated FFS equipment when it installed a TOPAS FFS line from Windmöller & Hölscher (W&H). The company runs its PVC operations in a 400,000-ft2 building.

While bagging powdered PVC with FFS technology has long been popular in Europe, U.S. companies have employed this technology primarily for the bagging of free-flowing bulk goods, such as sugar, fertilizer, plastic pellets and salt. Recently, W&H has seen a change, with an increase in orders from U.S. companies specifically for this application, according to W&H.

While the FFS process is tried and true for the packaging of pellets, it has proven tricky for some powdery chemicals with dus

t particles that prevent reliable sealing. W&H designed the TOPAS at TCI to bypass this problem by deterring dust from entering the seal area. This is done by mechanically obstructing dust during filling and afterward blowing ionized air to eliminate any particles that might have collected.

Jensen said the benefit of packaging PVC powder with FFS machines is that it's faster and cheaper than alternative packaging styles, and the package itself is recyclable.

The packaging process at TCI is well-located as rail cars can park on two spurs located alongside TCI's facility. A pneumatic conveyer pulls resins or PVC powder into a silo over the net weighing system just above the TOPAS. After packaging, the goods are palletized and ready for transport by truck or ship.

The company has seen such success with its first TOPAS line that it installed a second line.

"We have the confidence in this particular unit and it produces a nice, cleaner package," he said. "I suspect over the next five years as machines deteriorate and wear out, my competition will most likely install these lines."

"It's under the same premise of PVC (to put in a polyethylene packaging line) as there currently isn't much polyethylene packaging capacity in New Orleans," he said. "The economics and service justify the investment. We're excited about the market opportunity and to offer more services to our existing customer base."