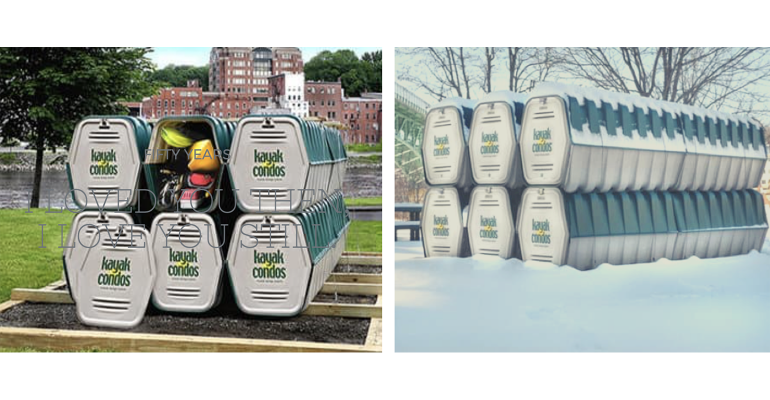 Acting on the simple observation that “paddling is supposed to be fun, not exhausting,” Buddy Doyle embarked on a 10+ year journey navigating between patent lawyers, thermoformers, and sheet extruders. It didn’t end well.

In 2006, Buddy Doyle of Gardiner, Maine, was the recipient of a tandem kayak, a gift for helping out a friend. That gift would inspire a product idea that Doyle hoped would benefit him as well as paddlers everywhere. The problem, as Doyle discovered, was lifting the kayak onto the roof of his vehicle, driving to the waterfront, offloading it, and getting it into the water, then doing it all again in reverse.

“Paddling is supposed to be fun,” Doyle told PlasticsToday, “not exhausting!”

That’s when Doyle began thinking about how convenient it would be if he could safely store the kayak at the waterfront. Rickety, weed-infested wooden racks leave kayaks open to vandalism or theft. What if there was a way to store the kayak and gear close to a favorite “put-in” at the waterfront in a safe and secure “gym locker” type of device that would eliminate all the “lugging and toting” while keeping the kayak safe? How great would that be, Doyle thought. That’s when the idea of Kayak Condos popped into his head — a commercial product that would enhance and encourage more frequent paddling experiences.

Doyle applied for and secured a grant from the Maine Technology Institute. To fulfill the agreement that came with the grant money, Doyle went to a plastics manufacturer in Massachusetts, who charged him $15,000 to make a prototype — $10,000 came from the grant and Doyle ponied up the other $5,000. It was an expensive first step, but Doyle was confident that he was on the way to success with Kayak Condos.

Prototype in hand, Doyle was able to pitch his idea to Old Town Canoe & Kayak Co. in Old Town, ME. “When Old Town took interest, I knew I was on to something,” Doyle explained. “They didn’t need me — I needed them.” Old Town’s head of engineering, Eric Schmidt, helped Doyle with the design and then recommended Castek Aluminum in Elyria, OH, to make the tooling. The cost of the large aluminum, water-cooled thermoform mold was $45,000. The locking door would be roto-molded due to the fact that the ¼-inch flat door was too flimsy and could be easily pried open. The second iteration of the roto-molded door required another $6,000, but that was less than the $19,000 that Doyle was quoted for a thermoformed mold for the door. Old Town formed the first 30 units, but without the CNC router capabilities to trim and drill the parts, the general manager made it clear that they could not go into full production. It took them an entire afternoon to thermoform the 30 Kayak Condos and a week or more to finish the parts by hand.

Doyle’s next problem was finding a thermoformer that would be willing to mold only a small number of parts. “Everyone we talked to that was capable of forming a 14-foot part wanted, understandably, large numbers that we were unable to afford. The cost of the polyethylene sheet from Primex at those numbers was expensive,” he said.

In the meantime, Doyle pressed forward to obtain a patent on Kayak Condos. After spending in excess of $20,000 “horsing around with several patent firms who were happy to take our dwindling cash reserve, I was not able to contact the patent examiner personally at the Patent and Trademark Office (PTO) in Washington, DC. Doyle put it to him straight: “What gives?”

The idea is too great to patent.

The attorney explained that this invention was so simple and easy to assemble, that there was nothing particularly unique or “patentable,” other than it being a great idea. Doyle recalls the patent attorney pausing, then asking, “Mr. Doyle, how soon can you get them down [to DC]. I can see them up and down the Potomac River — I’d want one!”

Shortly thereafter, Doyle got a call from the Niagara Peninsula Conservation Authority. They had 37 recreational sites throughout Ontario – many of them on water. They placed an order for 40 Kayak Condos for their Binbrook location. The initial 30 units that Old Town Canoe had produced were readily sold in Maine.

As he looked for a thermoforming company, Doyle got a call from LRM Industries in Rockland, FL. They were capable of extruding the plastic sheet needed for the Kayak Condos (with no minimum order for the Primex sheets), as well as run a small number of Kayak Condos. The company also saw a “vast market” for the product where paddling is a 24/7 activity, such as in the Southwest and up and down the West Coast. A “partner” company to LRM — a rotomolder in Lakeland, FL — would mold the doors.

The tooling was moved to LRM in Florida and Doyle was able to witness the initial run. The Kayak Condos were assembled, then disassembled and shipped, “nested” (as designed) to Canada. Doyle recalled the day the shipment arrived as “horrendous.” Like most inventor stories, it’s a long one, but the short version is that the Kayak Condos were shipped to Binbrook in Ontario for various recreational areas, but upon arrival, Doyle discovered that the “nested” condo halves had “splayed” and couldn’t be fastened together.

“My heart sank,” said Doyle, as visions of his “baby” failing filled his head. The project manager at the Niagara Peninsula Conservation Authority told him not to worry and “hang in there.” But at that time, “all I wanted to do was hang myself,” he added, expressing his despondency over the matter. The manufacturer in Florida promised to look into it and make good on the misshapen products as Doyle drove back to the states through Niagara Falls, briefly considering driving over them. Two weeks later, when LRM Industries filed for Chapter 7 bankruptcy, he wished he had. It’s a feeling many inventors have shared over the course of their experience.

Doyle found the wherewithal to have the parts replaced by paying what he said was “an arm and a leg” to a kayak manufacturer in the south, where he’d moved the molds after LRM’s bankruptcy, hoping to salvage the Canadian relationship and open the door to others. It took him almost a year to replace the parts. “It was the honorable thing to do, but when the new parts were delivered, the Canadians thanked me and wished me luck,” he said.

Kayak Condos are made in America, and always will be

One thing that Doyle did right was maintain his commitment to manufacture the Kayak Condo in the United States, despite the encouragement of many to take it offshore. Today, the company’s website says “Kayak Condos are made in America — and always will be.”

Doyle and his wife, who had helped him through all of this, took a well-deserved “hiatus” from what was now a 10+ year ordeal. Today, Doyle said, “We’ve healed, but we’re as determined as ever to see our product  succeed — and paddlers benefit.”

The tooling is in storage at Castek in Ohio, ready for purchase by a manufacturer or financial group willing to step in and take over. “There are certainly more paddlers (and potential paddlers) out there than there were even before we started this journey,” said Doyle, full of confidence that Kayak Condos is a viable commercial product. “And today – post-pandemic – there’s even more incentive and desire for people to get out and recreate.”

Doyle would be happy to send information to any interested parties willing to purchase the tooling, the trademark domain name, and a list of potential customers who had expressed interest to Doyle in purchasing Kayak Condos. He may be reached at [email protected].