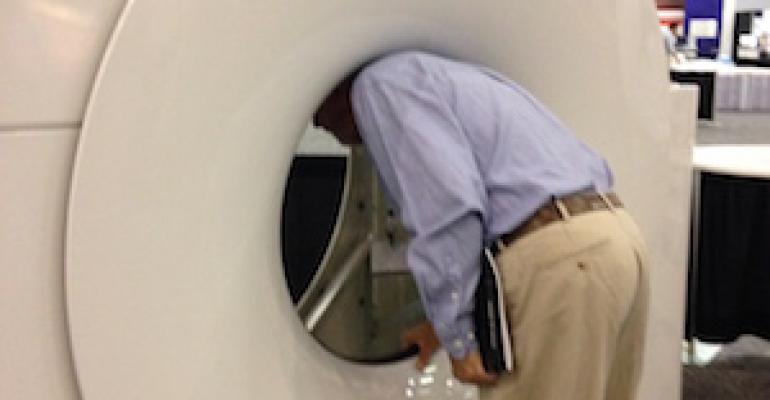 The 24th Annual SPE Thermoforming Conference, held in Atlanta last week, provided real proof of just how far that industry has come since 1991. The parts competition in the cut-sheet/heavy-gauge section gave attendees cause for pause, as they looked in amazement at the parts. It was quite different from the first few conferences, held in small hotel venues with tabletop exhibits where most of the parts fit nicely on a few tables.

Over the years, as the conference got larger, so did the parts. One area of the thermoforming industry that has expanded is large-part forming using heavy-gauge sheet. Applications for this process include everything from pickup-truck bed liners to dental chair bases to automotive hoods and medical equipment, MRI machines to be specific.

According to a recent report from Peter Mooney, President of Plastics Custom Research Services (Advance, NC), medical equipment enclosures are increasingly becoming a big part of the thermoforming industry's business. In fact, many of the large parts being produced today have been converted from injection molding to thermoforming, which is ideal for lower part quantities.

Mooney explains in his report that there are three major variations to the forming process:

While a variety of plastic resins are used in extruding the sheet in thermoforming and its variants, the most commonly used thermoformable sheet material "specified by medical equipment OEMs for their enclosures is a blend of acrylic and PVC (AC/PVC)," says Mooney. The two leading suppliers of this sheet are Kydex LLC of Bloomsburg, PA, and Boltaron of Newcomerstown, OH.

"Kleerdex AC/PVC sheet was developed by Rohm and Haas Co. of Philadelphia, PA, in 1965. The original target market was aircraft interior panels, where low flammability is critical," explains Mooney. "The acrylic provided rigidity and scratch resistance, whereas the PVC provided toughness and inherent flame retardance. Rohm and Haas spun off Kleerdex as a separate company based in Bloomsburg, PA. In 1987 Kleerdex was acquired by Sekisui Polymer Innovations LLC, a division of Sekisui Chemical Co. of Japan, and renamed Kydex LLC. Kydex T grade was promoted into the medical equipment enclosure market, and it became the sheet material of choice," says Mooney.

The parts competition for large parts at the SPE Thermoforming Conference had three medical enclosures.

The winner of the Silver Award was an enclosure cover for an automated diagnostic system that checks patient test results and flags them for clinical evaluation. Using tooling supplied by Bay State Cast Products and Borke Mold Specialists, Productive Plastics pressure-formed the three components that make up the enclosure cover. The tooling was textured to produce a specialty surface, and also contained undercuts, making for a complex assembly of a total of seven parts. Sekisui's Kydex T material was chosen for the project.

Evan Gilham, COO for Productive Plastics, said that thermoforming can compete well against injection molding as well as reaction injection molding (RIM) in the medical electronic equipment enclosure market. "If the part is fairly large and the volume of production is fairly low, the economics of pressure forming win out versus injection molding," said Gilham. "As for competing against RIM molders, the weight of the formed part is lower, the cost of the tooling is lower, and there is generally no need to paint the part's exterior. Thermoforming can deliver high gloss whereas this is difficult to achieve with unpainted RIM urethane. Additionally, inserts and other value-adding function features are easier to incorporate with forming compared to RIM molding."

Winning the Gold Award for value-added part was another of Productive Plastics' projects: An MRI scanning machine housing. Utilizing "self molding" for tooling, all eight parts were pressure formed using a cast and machined mold. In order to achieve the customer's "distribution of materials requirement," all parts used pushers to pre-stretch Kydex T. The material allowed for the wall thicknesses required and consistency over multiple runs and hundreds of parts, both in production and field replacements.

The 10 parts that make up the enclosure use undercuts and are formed with mating edges for better line-to-line fit. Cast and then CNC cut tools allowed for the precision required for assembly fit-up after design. The assembly allows for the parts to fit a separate metal frame that comes together at a staging location. The covers of the enclosure are painted using a PPG high-gloss paint system requiring a controlled environment to eliminate dust.

Wilbert Plastic Services won the Gold Award in the heavy-gauge parts competition for innovation, with its MRI machine enclosure for GE Healthcare. The enclosure uses temperature-controlled positive tooling for vacuum forming and negative tooling with action for pressure forming. GE Healthcare is one of Wilbert's key customers, and Wilbert has been working with that OEM to help it convert large composite parts to thermoformed parts, Mooney notes. Lowering the cost of these large medical equipment enclosures is an area of primary concern for Wilbert's customers, as it is in the injection molding industry. Mooney noted in his report that the "primary route to that end is thin-walling the enclosure parts."

Wilbert Plastic Services, headquartered in Belmont, NC, has thermoforming capabilities in Belmont and in White Bear Lake, MN. The company also has five injection molding plants. According to Mooney's report, the company serves the medical enclosure market with both processes.