Overview: Spot market activity in resin picked up once again after a couple weeks of relative inactivity. Spot-trading platform, The Plastics Exchange (TPE), noted that while demand was good, many potential deals stalled when asking prices rose quickly in support of September price-increase initiatives. Average polyethylene (PE) prices were steady to $0.02/lb higher, with a variance seen amongst grades. For the second week running, polypropylene (PP) added $0.01/lb.

Overview: Spot market activity in resin picked up once again after a couple weeks of relative inactivity. Spot-trading platform, The Plastics Exchange (TPE), noted that while demand was good, many potential deals stalled when asking prices rose quickly in support of September price-increase initiatives. Average polyethylene (PE) prices were steady to $0.02/lb higher, with a variance seen amongst grades. For the second week running, polypropylene (PP) added $0.01/lb. Spot monomer markets were active, as ethylene gave back almost half of the previous week's gains, while spot propylene continued to trade at its recently high price levels.

Energy prices continued to move in opposite directions, as October crude oil futures were sharply lower for much of the week, 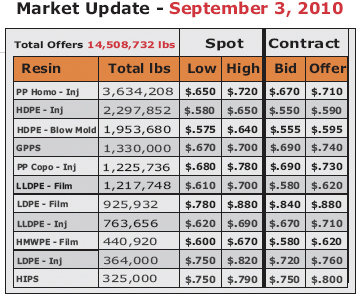 but then rallied to $74.60/bbl by Friday, to finish only $0.57/bbl lower. Natural gas futures traded in a tight range for much of the week and rallied sharply last Friday to $3.939/mmBtu to finish the week with a gain of $0.234/mmBtu. The crude oil : natural gas price ratio contracted to just below 19:1, which is still more than three times the 6:1 ratio that's considered parity. Given the relationship between the two hydrocarbons, monomer producers that derive their feedstocks from natural gas will continue to enjoy a nice cost advantage over those utilizing crude oil and its derivatives.

Ethylene's spot market reversed course, retreating $0.02/lb, after jumping by nearly $0.05/lb last week, to last transact at $0.3825/lb. Prices eased as unplanned outages were resolved and buyers backed away from spot purchases. Disruptions at ethylene production units had pushed September ethylene as high as $0.4125 near the end of August. The market's backwardation remains steep, with prices for deferred months shown back down to the low $0.30s/lb. The net-transaction prices (NTP) for July and August Ethylene have now settled at $0.37/lb and $0.39/lb respectively, tracking June's NTP of $0.395/lb.

Polyethylene (PE) spot volumes remained tempered this last week in spite of numerous inquiries, since fresh spot offers included September price-increase nominations and ultimately stifled potential transactions, according to TPE CEO Michael Greenberg. After most PE prices began to inch up in the previous week, some grades stabilized while others pressed higher. High-density injection, linear low-density film, and low-density film grades were all flat, while high-molecular-weight film and low-density injection stepped up $0.02/lb. Perhaps the most notable gain was seen in high-density blowmold grades, which added $0.015/lb and recouped much of the discount they had built up versus the other key commodity grades.

Propylene saw some "good action", according to Greenberg, in both its spot and contract offerings. For the second week in a row, September refinery-grade propylene (RGP) transacted several times in the mid $0.40s/lb, with the final trade once again at $0.455/lb. Although there were no polymer-grade propylene (PGP) transactions reported, with material for September delivery offered at $0.575/lb. After two months of stability, September PGP contracts have initially settled up $0.025/lb to $0.60/lb. Petrologistics' new propane-dehydrogenation plant is expected to produce on-spec propylene at any time now, according to Greenberg, and the additional PGP supply is anticipated to ease the steep premium PGP currently holds to RGP, with the historic spread around $0.05/lb.

Polypropylene (PP) spot prices gained another penny last week and have now recovered $0.11/lb from June's lows. At $0.71/lb, railcars of generic-prime homopolymer PP are now just a penny shy of a 50% market retracement between the April peak of $0.86/lb and the June trough at $0.60/lb. Spot supplies of offgrade PP have eased, with HoPP now markedly more available than copolymer PP.

After strong restocking purchasing in July and into August, processors seem comfortable with their inventories and are flatly turning away offers with prices beginning with a 7.

The domestic commodity resin markets entered September strong, with tight supply/demand dynamics giving producers the early edge with regards to price increases, which average $0.05/lb for both PE and PP. The spot export markets are now struggling, as rising U.S. prices have eliminated the high-volume arbitrage to both the Asian and European regions. Latin  American markets continue to provide steady demand, but competitive offers from international traders are keeping prices in check.—[email protected]