Overview: The spot resin markets continued to trade actively, with the volume of transactions remaining strong, according to plastics spot-trading platform, The Plastics Exchange (TPE). Polyethylene (PE), on average, held steady this week, but there was movement amongst grades, while polypropylene (PP) remained stable for the second straight week. TPE CEO Michael Greenberg noted that overall resin demand was strong, while supply is becoming increasingly tight.

Overview: The spot resin markets continued to trade actively, with the volume of transactions remaining strong, according to plastics spot-trading platform, The Plastics Exchange (TPE). Polyethylene (PE), on average, held steady this week, but there was movement amongst grades, while polypropylene (PP) remained stable for the second straight week. TPE CEO Michael Greenberg noted that overall resin demand was strong, while supply is becoming increasingly tight. He described spot-prime exports to Europe and Asia as challenging, while resin continues to flow into Latin America.

Ethylene spot-trading activity increased last week and prices subsequently came under pressure. Ethylene for August delivery fell in a series of trades during the course of the week, with the most recent transaction at $0.345/lb, down $0.02/lb from week-ago levels. In the past month or so, spot ethylene for prompt delivery had traded as low as just below $0.30/lb and more recently as high as $0.37/lb.  Forward ethylene prices through the end of 2010 are priced below near-term values. 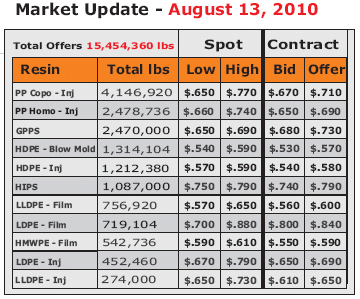 "Overall supply/demand fundamentals [in PE] are now tight, so it will be interesting to see how the market develops as we move towards month-end," Greenberg said, "and if processors begin to buy ahead of the price increase.

According to preliminary data just released by the American Chemistry Council, (ACC), PE demand was excellent in July. Domestic sales topped 2.6 billion lb, the highest in 2 years and almost 150 million lb above than June. Export sales fell to 652 million lb, about 10% lower than June's rapid clip, but still, at 3.27 billion lb, overall PE sales in July were the highest in a year. Strong forecasted demand gave producers comfort to run their reactors at nearly 95%, the best efficiency in a year, and aggregate producer PE inventories were drawn down about 3%, beginning August with 2.93 billion lb on hand.

Propylene prices were mixed last week in moderate trading, with refinery-grade propylene (RGP) prices shedding a mere $0.0025/lb, and last transacting at $0.4425/lb. RGP had traded as low as $0.38/lb in early June. Spot polymer-grade propylene (PGP) for August delivery changed hands at $0.57/lb, a penny higher than the last deal seen a couple weeks ago. PGP for September delivery sold last week at $0.575/lb. August PGP contracts settled earlier in the month at $0.575/lb, which was $0.02/lb higher than June and July contracts.

Polypropylene (PP) spot prices held steady for the second week in a row after recovering $0.09/lb in the previous two-months. Spot supplies have become increasingly scarce since the markets reversal began in June, and as the market reaches into the higher $0.60s/lb, a chilling effect has spread in the market. TPE notes that resellers have become apprehensive to buy speculative positions, which has further limited warehoused availabilities. At this point, many grades are "outright difficult to source in the spot market", according to Greenberg. Fresh generic-prime railcars can be procured, but spot margins have widened and spot prices are not necessarily favorable. There is however, a light-to-typical stream of offgrade railcars priced to the market.

According to the preliminary ACC data, domestic PP sales in July reached 1.527 billion lb, 9% better than June and the most since October 2007. Strong demand encouraged producers to increase their PP reactor rates to a shade over 90%, a level achieved just three times since October 2007. Although export sales fell 28 million lb to just 100 million lb, aggregate producer PP inventories still drew 9%, leaving just 1.42 billion lb on hand to begin August, the lowest level in almost a year.

"As the month wears on, and the market stays firm, there is an increasing possibility that producers will be able to raise average contract prices beyond the $0.02/lb increase in PGP contract prices," Greenberg said. —[email protected]