Market overview: The spot resin markets were "very quiet" during the holiday-shortened week, with few fresh offers for polyethylene (PE) or polypropylene (PP), as spot availability has dwindled into the year-end. Spot-trading platform The Plastics Exchange (TPE) reported that PE prices were steady, but PP continued its march upward, fed by "skyrocketing" monomer costs. 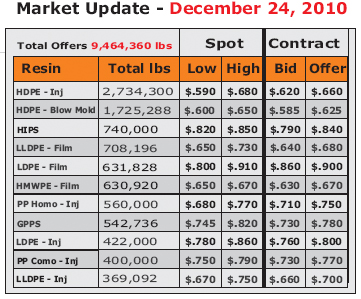 Ethylene spot prices continued to recede from their dramatic rise over October and November, as ethylene for January delivery fell by $0.02/lb in light trading, with the week's final spot transaction at $0.4275/lb. The market has retreated about $0.11/lb since late November thanks to previously disabled steam crackers going back on stream.

Polyethylene (PE) spot prices were flat with only light interest shown from buyers and sellers. After starting the month with general support for the December $0.05/lb price increase, spot PE has dropped back and is now steady to $0.015/lb lower for the month. Weak spot ethylene costs have hampered current price increase efforts, and it seems that another try will be needed in January. In addition to this nickel nomination, there is an additional $0.06/lb increase already on the table for January.

Propylene prices were bid higher again last week, although TPE noted that no transactions were confirmed. Several refinery outages continue to contribute to a shortage of material. Refinery-grade propylene (RGP) prices were bid up $0.06/lb to $0.66/lb. PGP last changed hands at $0.65/lb early in the month, but was bid at $0.71/lb last week with no firm seller interest. December PGP contracts settled early in the month, with a $0.03/lb gain to $0.605/lb, but have since been nominated $0.15/lb higher for January.

Polypropylene (PP) spot prices were marked $0.025/lb higher fueled by soaring spot monomer costs, which would indicate much higher PP prices in January. Very few spot PP offers were seen as monomer-constrained production limited resin availability and resellers held on to now "precious" resin inventory, according to TPE. December PP contracts were up $0.03/lb and will likely jump higher in January. PGP contracts have been nominated to increase $0.15/lb to start the year and PP producers are seeking to add $0.02/lb on top of the change in January monomer costs, making a $0.17/lb increase proposal for PP in the new year seem likely.