Market overview: In the final, holiday-shortened week of 2010, few market participants were around and just a few spot resin offers where shown as total availability hit the low point of the year.

Market overview: In the final, holiday-shortened week of 2010, few market participants were around and just a few spot resin offers where shown as total availability hit the low point of the year. Plastics spot-trading platform, The Plastics Exchange (TPE) reported that resin prices moved in opposite directions, as polyethylene (PE) remained soft with the proposed December $0.05/lb price increase slipping away, while polypropylene (PP) prices continued to surge on cost-push pressures. 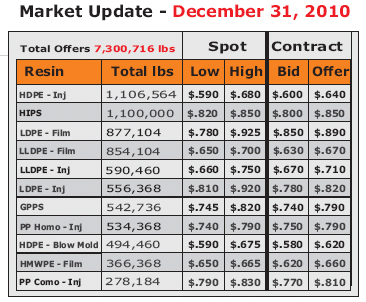 Ethylene spot prices shaved off a bit more than a penny last week. Ethylene for December and January delivery changed hands below $0.42/lb. TPE noted that in a rare occurrence, and after planned and unplanned outages all year, all steam crackers appeared to be operating normally as 2010 drew to a close. Spot ethylene traded in the mid-$0.30s/lb at the beginning of October; rallied to $0.54/lb in late November amid those aforementioned outages; and finished the year at $0.415/lb, based on the final spot ethylene trade.

Polyethylene (PE) spot prices were under pressure as 2010 came to a close, with weak spot ethylene markets during December impacting PE producer 's cost-push argument, and hampering their efforts to implement a $0.05/lb price increase. The market enters 2011 with a previously announced $0.06/lb increase for January. So, counting 2010's left over nickel increase, the new year in PE starts with $0.11/lb of increases on the table. Spot PE was mostly lower last week, with TPE's benchmark high-density PE blowmolding grade easing $0.005/lb lower. High-molecular-weight PE for film, low-density PE clarity, and linear low-density PE butene were all down $0.01/lb.

Propylene continued to rally, with refinery grade propylene (RGP) prices reaching $0.71/lb, the highest point of the year. Light feedstocks have been the favored feedstock by crackers during 2010, limiting propylene production. A spate of refinery issues in the past months has further restricted propylene supplies. Polymer-grade propylene (PGP) did not trade in the spot market last week, but was bid at $0.72/lb. PGP changed hands at $0.75/lb mid-month, while PGP contracts were up $0.03/lb in December, and have been nominated to increase a hefty $0.15/lb in January.

Polypropylene (PP) spot prices continued to climb, running up another $0.04/lb in the last week of the year. Spot supplies remained very tight with soaring monomer costs limiting resin production. Spot PP prices increased $0.11/lb during December, outstripping contract price gains. December PP contracts were up just $0.03/lb based on $0.605/lb PGP monomer contracts, but spot PGP has rallied $0.145/lb since then, pointing to a huge increase for January. January PGP contracts have been nominated to increase $0.15/lb and PP producers are looking to add another $0.02/lb on top of the change in January PGP costs, for a potential total increase of $0.17/lb.

2010 was an active year, highlighted by volatile feedstock costs and generally restricted resin supplies. Spot resin offerings dwindled towards the end of the year, and fresh spot markets should begin to develop the first couple weeks of January. 2011 will start out with a bang, with sharp price increases already on the table: $0.11/lb for polyethylene and $0.17/lb for polypropylene.