Market overview: The spot resin markets experienced heightened trading activity in the last full week of January. Spot-trading platform, The Plastics Exchange (TPE) said that material availability was relatively good last week with mixed prices. Polyethylene (PE) producers have yet to fully back down from their January price-increase initiatives of $0.05-$0.11/lb, even though spot PE levels were relatively flat in January.

Market overview: The spot resin markets experienced heightened trading activity in the last full week of January. Spot-trading platform, The Plastics Exchange (TPE) said that material availability was relatively good last week with mixed prices. Polyethylene (PE) producers have yet to fully back down from their January price-increase initiatives of $0.05-$0.11/lb, even though spot PE levels were relatively flat in January. Polypropylene (PP) prices however, rocketed higher, fueled by a $0.17/lb increase in January polymer grade propylene (PGP) contracts. 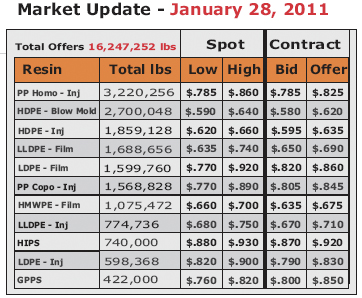 Energy markets saw active trading, with March crude-oil futures lower for most of the week, before spiking on Friday on news of political unrest in Egypt. They finished with a modest gain of $0.23/bbl for the week, settling at $89.34/bbl on Friday. March natural gas futures moved sharply lower, dropping $0.42/mmBtu, down almost 10%, to end the week at $4.323/mmBtu. The crude oil : natural gas price ratio expanded back out to 20.6:1.

Ethylene spot prices moved higher in a flurry of trading, although operating rates remained strong. Spot deals were seen every day last week, with the most recent transaction concluded for February delivery at $0.455/lb, up about $0.03/lb. While prices for future months also rose, the front end of the curve gained a couple cents premium. Material for second quarter delivery changed hands at a shade above $0.43/lb.

Polyethylene (PE) spot trading was active again, with prices $0.01/lb higher to $0.01/lb lower, depending on grade. Railcar availability was good with a number of suppliers looking to place cars before month-end, according to TPE. There was also a fair amount of packaged resin offered in Houston warehouses. Demand was good, and a number of deals came together at prices that were mostly steady for the month. As January drew to a close, processors reported that producers had not officially postponed the current $0.05/lb price increase, but that competitive offers were being met. TPE CEO Michael Greenberg noted that, "With high confidence, we would suggest that industry-wide implementation will again be attempted in February, especially since spot ethylene prices have edged back into the mid-$0.40s/lb."

Propylene's spot market was fairly active with several transactions confirmed. Polymer-grade propylene (PGP) for February delivery changed hands at least a couple times at $0.75/lb, off $0.015/lb from where January PGP had traded in the previous week. Refinery grade propylene (RGP) traded at $0.725/lb, squeezing the PGP-RGP spread in to just $0.025/lb, the tightest ratio in quite some time. PGP producers have nominated to increase February contracts by $0.03/lb, following the huge $0.17/lb gain in January. January PGP contracts were priced at $0.775/lb, but with spot monomer now trading lower than January contracts, TPE said this nomination might be viewed as aggressive.

Polypropylene (PP) prices eased another $0.005/lb and now sit $0.035/lb lower than the peak price reached in the previous week. After PGP and PP contracts jumped $0.17/lb earlier in the month, processors held back orders, limiting contract purchases to necessary minimums. This has likely contributed to the growing availability of spot resin and monomer in the market. While PP demand stalled in the low-mid-$0.80s, Greenberg noted that "orders are still to be had so long as the price starts with a 7." Resellers with well-priced old inventory are generally willing to supply these opportunities, but only with the limited grades on hand. Prime railcar needs are still facing prices towards the mid-$0.80s/lb. Commodity resin prices started the month strong then peaked around mid-month and began to retreat a bit. The market does not have an overly bearish tone; it is just having a hard time moving further higher.

Producers will look to start February with upward pressure. We expect PE producers to seek to affirm the $0.05/lb increase sought in December and then again in January. A $0.03/lb PP price increase has been floated by at least one producer, but we expect the market to move with monomer, which has recently seen some modest downward pressure. The spot export markets have not been a major factor, although some moderate demand for both PE and PP has been seen from Latin America, and some reasonable bids have also been floated by European traders.