Market overview: Buyer inquiries were plentiful and sellers were prevalent in the spot market's first full week of the new year, with a surprisingly good volume of offers for polyethylene (PE), in particular. Spot-trading platform, The Plastics Exchange (TPE), said PE prices were mixed depending on the grade, while the polypropylene (PP) market continued its rapid rise unabated.

Market overview: Buyer inquiries were plentiful and sellers were prevalent in the spot market's first full week of the new year, with a surprisingly good volume of offers for polyethylene (PE), in particular. Spot-trading platform, The Plastics Exchange (TPE), said PE prices were mixed depending on the grade, while the polypropylene (PP) market continued its rapid rise unabated. TPE CEO Michael Greenberg noted that there are double-digit price increases nominated for both resins, adding that monomer costs will ultimately help dictate what happens. 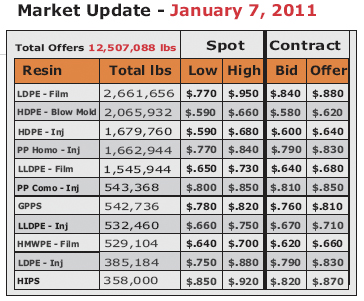 Energy markets: U.S. energy markets moved in opposite directions last week, bringing the crude oil : natural gas price ratio back down to a shade under 20:1. February crude oil futures moved lower, dropping $3.35/bbl to end the week at $88.03/bbl. February natural gas futures rallied to start the year, rising $0.30/mmBtu, but eventually gave back most of the gains by the end the week and finished at $4.422/mmBtu on Friday for a net increase of less than $0.02.

Ethylene spot prices started the week with high-volume trading, while a cracker outage broke the short-lived streak of 100% capacity availability. Ethylene for January delivery transacted up a couple cents, reaching as high as $0.44/lb, before relinquishing most of the gains by last Friday. Forward markets were made throughout 2011 at prices slightly discounted to current spot levels.

Polyethylene (PE) spot prices were mixed, and availability was good for the first week of the year. The market was more active than expected with healthy supplies, considering there was $0.11/lb of price increases on the table. High-density polyethylene (HDPE) stabilized after year-end pressure, but there was still plenty of blowmolding offered. Linear low-density polyethylene (LLDPE) butene was a penny higher, as it inched towards the price of hexene grades. Low-density polyethylene (LDPE) film grade offers improved, and prices were a shade softer, with a good amount of ethylene vinyl acetate (EVA) sold at prices on either side of $1.00/lb. The $0.05/lb PE price increase initially sought for December is now being revisited, distracting from the January$0.06/lb increase which has little chance of a timely implementation, according to TPE.

Propylene remained firm, with refinery-grade propylene (RGP) edging higher and trading to $0.715/lb. Light feedstocks continue to be favored by crackers limiting propylene production, creating a shortage of spot supply. Once again, polymer-grade propylene (PGP) appears to have gone un-traded in the spot market, but was bid back up a couple cents to $0.74/lb. The last reported PGP transaction was in mid-December at $0.75/lb. PGP contracts generally settle early each month, but have yet to in January. Currently, there are nominations for a whopping $0.15-$0.20/lb increase. The December PGP contract price was $0.605/lb.

Polypropylene (PP) spot prices continue to soar, climbing yet another $0.04/lb during the first week of the year. Spot material remains extremely tight, with just a few railcars offered along with inadequate supplies of inventoried resin from resellers. Demand from producers is very soft so far in January, as contract prices are unknown given the uncertainty of PGP contracts. At this point, market participants might prefer a 2-month settle, rather than a potential spike top, for which the massive increase could be difficult for processors to pass through to their end-user customers, according to Greenberg.

2010 ended with a whimper but 2011 started out with a bang. Market participants returned from the holiday break to find aggressive PE offers at relatively steady prices and very little spot PP. The $0.11/lb of current PE price increases is already now just a re-attempt for the December nickel. Bubbling propylene prices have processors scared of January contract PP prices which could be $0.15-.20/lb higher. Hope y'all came back well-rested, if week one of 2011 is any indication, there is plenty excitement ahead.