Market overview: The spot resin markets began November with a bang, according to spot-trading platform, The Plastics Exchange (TPE). Polyethylene (PE) prices quickly jumped $0.03/lb, riding soaring spot ethylene, which shot up on a fresh series of cracker outages. Polypropylene (PP) prices were mostly steady after the market had been trending consistently lower. PE producers that did not implement October's proposed $0.04/lb price increase should have little difficulty doing so in November, according to TPE.

Market overview: The spot resin markets began November with a bang, according to spot-trading platform, The Plastics Exchange (TPE). Polyethylene (PE) prices quickly jumped $0.03/lb, riding soaring spot ethylene, which shot up on a fresh series of cracker outages. Polypropylene (PP) prices were mostly steady after the market had been trending consistently lower. PE producers that did not implement October's proposed $0.04/lb price increase should have little difficulty doing so in November, according to TPE. Polypropylene (PP) contracts seem likely decline as November polymer-grade propylene (PGP) contracts are expected to settle lower. Continued weakening of the U.S. dollar is now drawing the attention of international plastics traders looking for opportunities to export material from the states.

Energy markets continue to diverge, with the falling dollar helping push December Crude Oil futures up $5.43/bbl to settle at 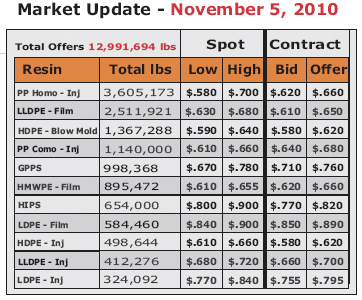 $86.85/bbl on Friday. That is the highest close for this contract in more than two years. Natural gas futures, meanwhile, gave back some of the previous week's recovery gains, with the December contract dropping $0.099/mmBtu to end the week at $3.939/mmBtu. The crude oil : natural gas price ratio expanded back beyond 22:1, putting it more than three-and-a-half times the 6:1 ratio considered parity.

Ethylene prices surged in heavy trading, rising $0.12/lb last week, a roughly 30% jump. Scheduled cracker shutdowns coupled with unplanned outages to lower ethylene production capacity by about 15%, as ethylene for November delivery traded as high as $0.525/lb. While the entire forward curve has risen, the front months are now trading a steep premium to the first and second quarters of 2011. The net transaction price for October ethylene has been established at $0.4275/lb, up about $0.0375/lb. During most of October, spot ethylene traded in the mid-to-high $0.30s/lb, only topping $0.40/lb at the end of the month.

Polyethylene (PE) spot prices rallied $0.03/lb during the first week of November, with light activity pushed toward frenetic trading when word of soaring ethylene costs spread. Resin availability was light thanks not only to the normal beginning-of-the-month supply lull, but traders also pulled back offers since they were unsure how high the spot market could run. With the recent spike in spot ethylene, the balance of PE contracts that had resisted October's proposed price increase are likely to accept the $0.04/lb rise now. Going forward, there is already a $0.05/lb increase nominated for December.

Propylene's spot market was relatively quiet, with prices steady to just a tick higher. Refinery grade propylene (RGP) last transacted at $0.465/lb, the same as the previous week. Polymer grade propylene (PGP), meanwhile, changed hands a couple times with the last deal concluded at $0.55/lb. PGP traded at RGP-plus $0.07/lb in the previous week, and the implied value has widened to $0.085/lb. With the spot PGP market generally weaker, many believe that November PGP contracts will settle lower, although the level has not yet been agreed on. October PGP contracts were priced at $0.585/lb.

Polypropylene (PP) spot prices shed $0.05/lb after 7 weeks of continual pressure, but last week the market finally held firm. Steep discounts for widespec material were seen towards the end of October, but the market stabilized at the start of November. Michael Greenberg, TPE CEO, noted the interesting dynamic that entered into the market. "Stabilizing monomer costs in the mid $0.50s/lb made the aggressive offgrade PP offers, which were priced around monomer, seem like a bargain," Greenberg said. Meanwhile, fresh widespec offers last week came in a few cents higher, shrinking the discount held to railcars of generic prime material priced into the mid $0.60s/lb. The average November PP contract pricing will move along with the settlement in PGP monomer contracts, which are pointing lower.

"How quickly a market can change. A series of cracker outages has again shown how the petrochemical supply chain, and its light inventories, is vulnerable to feedstock disruptions."