Market overview: Spot resin activity picked last week, as prices moved slightly lower and offered volumes increased as some suppliers sought to sell additional material into quarter-end. Spot-trading platform, The Plastics Exchange (TPE) said that overall buying interest was somewhat muted, as processors still seem content with their inventory levels and are looking to limit purchases that include the September price increases that average $0.05/lb for polyethylene and polypropylene.

Market overview: Spot resin activity picked last week, as prices moved slightly lower and offered volumes increased as some suppliers sought to sell additional material into quarter-end. Spot-trading platform, The Plastics Exchange (TPE) said that overall buying interest was somewhat muted, as processors still seem content with their inventory levels and are looking to limit purchases that include the September price increases that average $0.05/lb for polyethylene and polypropylene. TPE CEO Michael Greenberg said that although negotiations are not yet complete, it now seems that about half of the proposed September increases could be implemented. 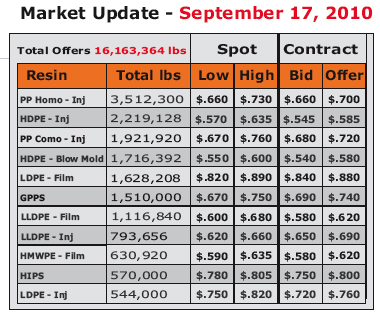 Energy markets again traded in opposite directions, with November contracts in the process of rolling into the front-monthposition. Crude oil futures dropped $2.45/bbl to end the week at $76.45/bbl, about $4/bbl off the week's high, while natural gas futures gained $0.078/mmBtu to settle at $4.203/mmBtu last Friday. The crude oil : natural gas price ratio shrunk to 17.8:1, which is still much wider than the 6:1 ratio considered parity. This relationship continues to provide a vast cost advantage to North American ethylene and PE producers over their international counterparts, enabling producers to develop a large base of direct PE exports.

Ethylene spot prices bounced back $0.02/lb in a series of relatively low-volume trades over the course of the week. Material for September delivery traded up to $0.33/lb, but is still well off the $0.415/lb interim peak reached at the end of August amid a brief supply disruption. All major North American crackers are currently operating on-stream. The August net transaction price (NTP) of ethylene was set earlier in the month at $0.39/lb, a sharp premium to current spot prices. The September NTP has yet to be determined.

Polyethylene (PE) prices eased slightly last week, mostly on market sentiment. Supplies continue to be relatively tight, which supports producers' efforts to implement the $0.05/lb price increase nominated for September contracts. Prospects for the increase were encouraging several weeks ago when spot ethylene prices were spiking, but less so now since these spot costs have subsided. Domestic PE demand was very strong in August as buyers bought excess resin ahead of the increase. PE production margins are already very good, but some market participants feel that a partial increase could become firm based on supply/demand, but that the gains might then be unwound in October.

As PE recovered in August and into September, prices for the pure commodity grades began to erase the discounts held to premium materials. The HDPE blowmolding market, which had been the weakest, has tightened up over the past several weeks, according to Greenberg, recouping the discount it held to HDPE injection. While spot prices dropped about $0.005/lb early last week, prices could again move higher as fresh production issues, specific to blowmold, could lead to some supply disruptions. TPE noted that linear low-density polyethylene (LLDPE) butene has firmed, with prices pushing up to the higher alpha olefins. Low-density polyethylene (LDPE) film grade availability remains scarce and spot offers are quickly sold.

Propylene's spot market has been relatively quiet during September, with the few refinery-grade propylene (RGP) transactions reported for the month within the $0.45-$0.46/lb range. Last week, RGP traded higher to just a shade under $0.46/lb, while spot polymer-grade propylene (PGP) has been offered throughout the month at $0.575/lb, $0.025/lb below the September contract prices. PGP for October delivery changed hands once this week at that level. Additional PGP supplies are expected to come to market when the new propane-dehydrogenation plant begins producing on-spec propylene. "This could pressure the RGP-PGP spread," Greenberg said, "currently around $0.12/lb, but historically seen around $0.05/lb."

Polypropylene (PP) spot prices eased a penny last week, with the market continuing to settle back as participants look into October and modestly lower monomer prices. Spot PP availability has improved, with generic-prime resins featured. Actual demand from the heavy contract forecasts appears to be coming up short, leaving producers with extra railcars to sell. The market is not overly bearish, just not bullish at this point, and the $0.70/lb price level seems expensive, according to TPE. U.S. PP prices are also too costly for the international market, making exports difficult.

"The trend towards "monomer plus" contracts for PP might have seen its peak," Greenberg said. "This type of pricing structure made sense to producers during the past several years, when rising monomer costs and over capacity plagued the market-and margins. However, now that over one billion pounds of potential annual production has been shuttered, supply/demand balance has tipped back in favor of producers."

Still, with so many resin contracts tied directly to monomer costs, it has been difficult for producers to expand their margins beyond the minimally acceptable levels that they previously agreed to. As annual contracts expire, some processors might find producers reluctant to simply renew on existing terms. Greenberg noted that processors that have had little power negotiating resin prices, especially during periods of rapidly rising monomer costs, might benefit with a different pricing structure. With conflicting market fundamentals at hand, September resin contract negotiations are "heating up", according to TPE.

"After a period of inventory build and the recent weakness in spot monomer costs, processors have strengthened their resolve to withstand the full increases. Still, producers also have relatively light inventories and are intent to implement some of the increases. At the moment, the question is how much will actually stick and will it remain in October?"—[email protected]