Market overview: The resin markets saw renewed activity from buyers and sellers last week, as spot polypropylene (PP) prices were mostly steady, while average polyethylene (PE) prices gained a penny. Spot-trading platform, The Plastics Exchange (TPE) noted that contract negotiations have "heated up", with the major consultancies publishing a stronger settlement for September contracts than the spot market had indicated. 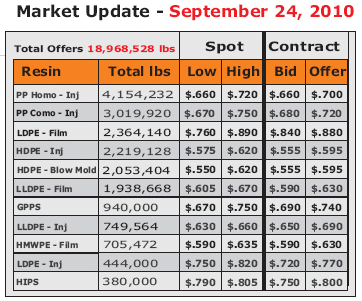 Energy markets were mixed last week, as November crude oil futures rebounded, adding $1.57/bbl to end the week at$76.45/bbl, while natural gas futures gave back the previous week's gains and then some, settling at $4.009/mmBtu on Friday, down $0.194/mmBtu for the week. As a result, the crude oil : natural gas price ratio expanded to 19:1.

Ethylene spot prices edged about a penny higher, with numerous transactions seen between $0.33-$0.34/lb for both September and October deliveries. Greenberg noted that markets were made into 2011, and while the curve still shows backwardation, so that the difference between the forward price and the spot price is less than the cost of carry, forward-month discounts are now relatively slight. Ethylene crackers are running hard now, but there are a couple turnarounds planned over the next month.

Polyethylene's (PE) spot market perked up with good two-sided trade seen. Buyers of indexed-based resin are facing the acceptance of the full September $0.05/lb price increase, pushing many processors to the spot market. Sellers also appeared, looking to sell their uncommitted inventories at this higher level. In the end, traded volumes were ultimately good, with most PE deals done in-between, generally reflecting the $0.03/lb bump that was already priced into the spot market.

Propylene's spot market remains subdued, with the market having been quiet throughout September as just a few trades were executed in a tight price range. A refinery grade propylene (RGP) transaction was seen last week at $0.4575/lb, about 1/8th cent lower than the previous week. Spot polymer-grade propylene (PGP) went untraded, with material offered $0.02/lb below than the September contract-settlement price of $0.60/lb. The market was also impacted by the shutdown of PetroLogistics' new 500,000 tonnes/yr propane-dehydrogenation plant in Texas, which will supply "on-purpose" propylene to the market. As the delays continue at the plant, TPE speculated that perhaps on-spec PGP will be produced in the next week or two. In the meantime, the PGP-RGP spread remains historically wide at about $0.12/lb.

Polypropylene (PP) spot prices were steady last week, holding about $0.01/lb lower than their mid-month levels. The market rallied several cents into September, anticipating the $0.05/lb price increase, but has since stalled. The PP market tightened during July and August, and spot PP prices increased more than monomer. Although it seemed that producer margin expansion was likely, contracts only floated with PGP contract costs.

"While the [PP] market has now loosened a tad, some contracts could end up taking an extra $0.005/lb increase for September. Although the timing is perhaps not ideal, over the summer months some margin expansion was warranted."

Fresh railcars of generic-prime homopolymer PP are now offered at around $0.70/lb, with a widening discount seen for offgrade material. Rising domestic prices have disabled profitable spot exports, and offshore opportunities are priced closer to PGP monomer. Domestic processors built resin inventories during the summer, driven by both price relief and hurricane insurance. Greenberg said the market now seems "a bit toppy" and a minor inventory drawdown could be warranted, but ample material for processing should still be kept on hand.

Tight supplies will allow producers to push through most of their September price increases, with the average PE contracts $0.05/lb higher, while PP secures a $0.025-$0.03/lb gain. Looking forward, Greenberg said there is a $0.04/lb PE increase already nominated for October, adding, "But absent additional supply disruptions, just maintaining this nickel increase for another month could be considered a win." TPE had not yet seen any additional increases nominated for PP.