TPE resin prices, August 1-5: PE and PP up $0.01/lb; market as yet unaffected by upstream crude and gas 'mayhem'

Resin markets endured a "tug-of-war" last week, with bullish momentum and price increase initiatives pitted against plunging world-wide markets for stocks, commodities, and energies. Spot-trading platform, The Plastics Exchange, did note, that in spite of what it called "upstream mayhem," downstream products, including monomers and resins, have not yet had a negative reaction. TPE did state that the market's sentiment has turned more cautious given overall uncertainty with the economy.

Resin markets endured a "tug-of-war" last week, with bullish momentum and price increase initiatives pitted against plunging world-wide markets for stocks, commodities, and energies. Spot-trading platform, The Plastics Exchange, did note, that in spite of what it called "upstream mayhem," downstream products, including monomers and resins, have not yet had a negative reaction. TPE did state that the market's sentiment has turned more cautious given overall uncertainty with the economy. Fresh offers for railcars of prime polyethylene and polypropylene were limited, and asking prices were lifted higher to, in part, reflect August price increase initiatives. These include $0.05/lb for polyethylene, while polypropylene is essentially figured to move in line with the settlement of polymer grade propylene (PGP) monomer. 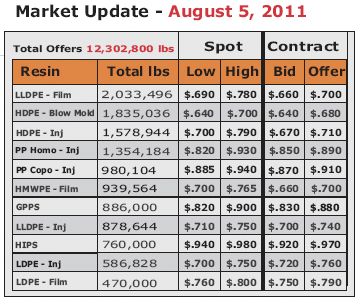 Energy prices dropped sharply again amidst broad economic and credit concerns, as September crude oil futures finished the week at $86.88/bbl, about $4/bbl above Friday's low but still down nearly $9/bbl for the week. September natural gas futures continued to erode, settling below $4/mmBtu for the first time since March, as the week ended at $3.941/mmBtu for a loss of $0.204/mmBtu. The crude oil : natural gas price ratio contracted a bit to 22:1, which is still extremely wide on a historic basis, considering that parity is 6:1.

Ethylene spot prices were firm and showed resilience, apparently more affected by short-term supply constraints than falling energy markets. Ethylene for August delivery transacted as much as a penny higher, but then eased a tad to last trade at $0.64/lb on Friday for a half-cent gain. Forward markets through the balance of 2011 were seen above $0.60/lb. The net transaction price for July was declared at $0.5675/lb, steady from June, and the spot ethylene market, albeit on relatively small volume, continues to trade well-above NTP.

Polyethylene's (PE) spot market moved higher in the first week of August, as average prices, including benchmark high-density PE blowmolding, rose about a penny. Material availability was generally tighter, which is typical at the beginning of a month with a price increase in play. Offers for generic prime PE railcars, when made available, were priced $0.05/lb higher, reflecting the August price increase. Suppliers with old inventory provided spot liquidity at just a modest bump in price. Other traders were seen buying in the beginning of the week for speculative inventory. This changed by Friday, however as buyers became apprehensive of any excessive purchases when macro markets cast a shadow of doubt on an otherwise strengthening PE market.

Propylene spot material saw heightened activity, with a better volume transacted, but price movement held to a minimum. Refinery grade propylene (RGP) traded a penny above and below the previous week's level, with the final deal done at $0.68/lb, down $0.01/lb for the week. PGP trading was more limited, with the most recent trade seen at $0.7875/lb, down just $0.0025/lb from the previous week. PGP contracts for August have not been settled yet; higher prices were discussed, but upside potential could be limited by plummeting energy markets.

Polypropylene spot prices resumed their recovery, rising $0.01/lb amid scarcer supplies. The spot market has risen $0.08/lb since the market hit bottom in the beginning of July. It still sits $0.13/lb below May's peak prices, however. The spot market has recouped the steep discount previously held to contracts, as railcars of generic prime polypropylene are now available in the high $0.80s/lb. So far in August, considerably weaker energy markets have put a damper on price increase expectations, currently only a very modest change is likely to be seen, TPE CEO Michael Greenberg noted.

Falling energy prices and general uncertainty in world markets have started to sap the bullish momentum developed for domestic resins. While pricing power was transferring back into the hands of the producers and price increases seemed likely in August/September due to favorable supply/demand economics, a tone of doubt has begun to be expressed by market participants. Negative sentiment began to swirl amongst international resin traders who had provided a rising floor price, which aided the recovery of the spot market. It is still early in the month, so there is time to see if the domestic resin market can shrug off these broader issues and producers can implement their price increases, but it is not looking to promising at the moment.