Polyethylene (PE) moved as much as a penny higher and polypropylene (PP) gained a half-cent, as the spot commodity resin markets continued to strengthen. Spot-trading platform, The Plastics Exchange (TPE), reported that spot resin offers continued to flow at a below average pace. Generic prime railcars were limited thanks to reduced upstream inventories and good exports, particularly for PE.

Polyethylene (PE) moved as much as a penny higher and polypropylene (PP) gained a half-cent, as the spot commodity resin markets continued to strengthen. Spot-trading platform, The Plastics Exchange (TPE), reported that spot resin offers continued to flow at a below average pace. Generic prime railcars were limited thanks to reduced upstream inventories and good exports, particularly for PE. August resin contracts are moving in opposite directions, with PE producers set to implement an increase of either $0.03-$0.05/lb, while PP producers will pass along $0.015/lb of relief to their contract buyers. 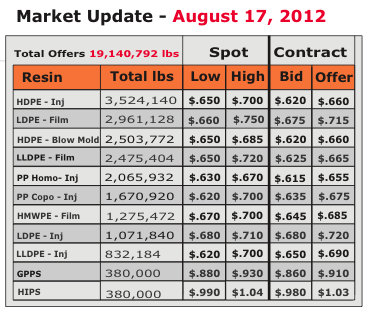 Ethylene's market heated up, rising more than $0.04/lb in active trading. The strongest gains were seen at the end of the week, spurred along by an unexpected cracker outage. Ethylene for August delivery reached $0.55/lb, the highest since May. The spot ethylene recovery has retraced nearly 50% of the sharp drop that occurred during the second quarter. Similar gains were seen this week in forward months through the end of 2012, keeping the curve backwardated by a couple cents. Spot ethane prices eased about $0.025/gal to end the week just below $0.35/gal ($0.147/lb), expanding ethylene margins all the way out to $0.40/lb.

Polyethylene (PE) spot prices pressed higher, with gains up to $0.01/lb seen, and HDPE representing the strongest segment of the market. PE producers have a $0.05/lb increase on the table for August, and TPE noted that while one producer relaxed its stance to just $0.03/lb, no one else seems to be following suit. "PE producers as a group are sitting on their lightest resin inventories of the year, this coupled with good exports and rapidly rising spot ethylene costs have them sticking to their guns seeking to implement the entire nickel," explained Michael Greenberg, TPE CEO. Many domestic processors re-stocked in June and July, a period that represented the strongest 2-month volume in 5 years. "So while most of the market is not chasing resin, those in need of spot material are indeed paying the (higher) price," Greenberg said.

Propylene's spot market experienced heightened activity, although price movement was minimal. Polymer grade propylene (PGP) for August delivery most recently changed hands last week at $0.4725/lb, up a half-cent from the last transaction at the start of the month. The curve flattened during the past several weeks, but forward prices still slope gently upward, and PGP for delivery during the fourth quarter reportedly changed hands around $0.48/lb. August PGP contracts settled at $0.505/lb, down $0.015/lb from July. Spot RGP traded up a penny to $0.3625/lb.

Polypropylene (PP) spot prices edged up another $0.005/lb, deviating from contract prices in August, which have settled down $0.015/lb along with PGP monomer. The disparate movements of PP and PGP represent a market shift, according to Greenberg. "The vast majority of PP contracts are either tied directly to monomer or to an index which has historically been locked in step with PGP," Greenberg said, "so the recent de-coupling of the two markets is significant." Spot PGP has been trading consistently below contract, so there is no current threat of a cost-push PP increase. However, strong re-stocking demand from domestic processors has drawn upstream PP inventories down to the lowest level in two-and-a-half years so supply/demand dynamics are such that spot resin is trading above contract prices. "The PP market, which has been predictable based on monomer, is starting to get very interesting," Greenberg noted.

The spot resin markets edged higher, driven by lack of supply due to a substantial shift of inventory downstream from producers to processors over the past 2-3 months. Buyers are generally not clamoring for material, but those in need are pushing up the price. This bodes well for PE producers who will be able to implement a $0.03 -$0.05/lb price increase, offsetting much of the recent run-up in spot monomer costs. Although PP contracts have shed $0.015/lb in August, spot prices have already recouped most of the early month losses. Export demand remains good, but could get challenged by rising U.S. resin prices.