Spot resin trading started slowly after the holiday break, but activity began to heat up by the end of the week, particularly for polyethylene (PE). Spot-trading platform, The Plastics Exchange (TPE), reported that fresh offers were hard to come by, with generic prime PE cars offered up $0.11/lb reflecting both the December $0.05/lb and January $0.06/lb price increases.

Spot resin trading started slowly after the holiday break, but activity began to heat up by the end of the week, particularly for polyethylene (PE). Spot-trading platform, The Plastics Exchange (TPE), reported that fresh offers were hard to come by, with generic prime PE cars offered up $0.11/lb reflecting both the December $0.05/lb and January $0.06/lb price increases. Generic prime polypropylene (PP) cars were mostly unavailable, but those which were seen were priced steady to a couple cents higher than those offered near the end of December. Widespec cars for both commodity materials began to flow and prices were dependent on quality. A wide range of prices was also seen from resellers with old resin inventory, as exporters were aggressive and generally eager to gain new orders while U.S. distributors, facing potentially higher replacement costs, moved their prices higher. 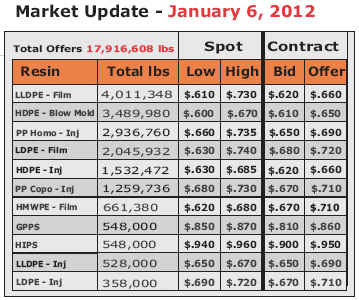 Energy markets began 2012 with an uptick, as February crude oil futures jumped $2.73/bbl to end the week at $101.56/bbl. February natural gas regained about half of the previous week's losses, adding $0.081/mmBtu to finish at $3.062/mmBtu on Friday. Prices still hover around 2+ year lows, however. The crude oil : natural gas price ratio is hanging right around the record wide level of 33:1.

Ethylene was "off to the races" as the month began, according to TPE CEO Michael Greenberg. Material for January delivery traded a number of times last week at higher prices each time, finally hitting $0.575/lb by Friday for a weekly gain of $0.0425/lb. Although all gulf crackers are currently operational, several are due to come offline for scheduled maintenance, placing a premium on ethylene for prompt delivery. Ethane, the favored feedstock for the production of ethylene, was under pressure and prices slipped more than a nickel last week to just under $0.76/lb, further expanding already healthy margins.

Polyethylene (PE) jumped $0.03/lb to start the new year, forced up by restricted supplies. Low-density polyethylene (LDPE) film grade resins are particularly scarce and allocation conditions exist due to production issues. As TPE expected, there were few fresh PE railcar offers made available by producers and those that were shown to the market were marked $0.11/lb higher than at the end of November. PE producers have largely ignored discussions about their $0.05/lb price increase, noting that it was implemented December 1. Current negotiations mostly surround the next $0.06/lb increase, which is reportedly being invoiced on January contract purchases.

Propylene showed some signs of life to begin the New Year After after months of pressure. Refinery grade propylene (RGP) prices actually posted a ain, rising $0.015/lb to end the week at $0.395/lb, just off of 18-month lows. Spot polymer grade propylene (PGP) jumped $0.015/lb in each of two successive transactions, bringing the market to $0.56/lb which is $0.03/lb above year-end prices. January PGP contracts have not yet settled, They were initially nominated to increase $0.02/lb, but were weak in late December, and based on the current spot market, TPE thinks a rollover from December at $0.56/lb could also "be in the cards."

Polypropylene's (PP) activity was relatively light to begin the year, with average prices mostly steady and little movement forecast for January contracts. The spot market, however, could find some further support as upstream PP supplies have tightened due to continued rationing of production. PP contracts eroded $0.22/lb during the 4th quarter, during which time resellers liquidated unnecessary inventories, also contributing to the current lack of spot liquidity. Although export demand is lackluster, Houston traders continue to see a steady flow of material and remain a good source for most grades of packaged PP, both generic prime and offgrade.

It should come as no surprise that the spot resin market was tight as January began; market participants throughout the supply chain traditionally lighten inventories into year-end. It seems that PE producers took advantage of the communication lull during the holidays to finally implement their $0.05/lb price increase in December - the 8th attempt really was the charm, hmmm...who woulda thunk it?!? PE buyers are now contending with an added $0.06/lb increase for January - that is a fast $0.11/lb, creating quite the sticker shock for buyers. The $0.06/lb is far from secure, but ethylene prices are also on the rise and there is the better part of the month still ahead. PP buyers are faring a bit better, while propylene monomer has seen a modest gain, it is unlikely that January PP contracts will see more than a $0.02 -$0.03/lb swing; still spot supplies are tight and railcars are not easy to source. It is always interesting to start a new year - we wish that it is prosperous one for participants all along the resin supply chain.