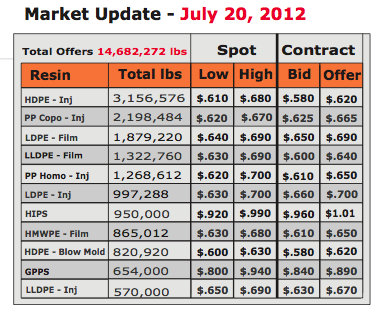 Ethylene transacted higher at just shy of $0.50/lb last Monday, but the market then dropped as the week wore on. Ethylene for July delivery last changed hands at $0.475/lb last Friday to record a weekly loss of $0.015/lb. TPE noted that all gulf crackers are up and running after completing an active maintenance season during the first half of 2012. Material for prompt delivery is trading at a slight premium to the deferred months, which are currently priced down to $0.45/lb by December. Ethane prices jumped again, racing back up to $0.40/gal ($0.17/lb).

Polyethylene (PE) has maintained its upward momentum, with gains of $0.01 - $0.02/lb widely seen. HDPE was the strongest of the group recouping some recent discounts. After back-to-back $0.07/lb monthly decreases, PE contracts are holding steady in July and could be poised to move higher next month, according to TPE. Overall upstream resin inventories were drawn down sharply in May and June, leaving room for producers to hold back material and add to positions if necessary as they posture ahead of an August $0.05/lb price increase. Stronger PE exports are also providing good alternative demand helping to keep the spot PE market tightly supplied, Greenberg noted.

Propylene prices edged up another penny to $0.495/lb for polymer grade monomer in relatively light outright trading. Although the market has recovered $0.045/lb in the past 2 weeks, spot PGP is still priced below July contracts, which settled steady at $0.52/lb. Material for prompt delivery is trading at a slight discount to future months through the end of 2012, where prices in the low $0.50s/lb have been seen. Refinery grade propylene ended the week at $0.37/lb, a familiar price seen most of the past couple months.

Polypropylene (PP) spot supplies were fairly tight and prices firmed a cent this past week, erasing the $0.01/lb loss from the beginning of the month. Overall PP market interest has been subdued in July, TPE noted. After the sharp second quarter price break, buyers made great strides to rebuild inventories during June. Producers took that added demand as an opportunity to unload excess inventory and consequently neither side of the market expressed great urgency to transact in the spot market during July, according to Greenberg. "The PP market is currently well balanced and will likely follow propylene monomer costs for its next move," Greenberg said. Spot PGP is currently $0.025/lb, below contracts, but has erased a much larger gap over the past couple weeks.

After contracts for PE fell $0.14/lb and PP dropped $0.255/lb during the second quarter, contracts for both products appear steady in July. PE and PP inventories were substantially reduced during May/June as exports increased and domestic processors re-stocked their resin coffers at the lowest prices of the year (so far). Spot resin prices were up this past week; Polyethylene market sentiment continued to shift more towards bullish ahead of the $0.05/lb price increase nominated for August. However, the PP market has been less exciting - as limited spot supplies have been met by equally unenthusiastic demand.