Polyethylene added another penny and has risen steadily throughout July, now up $0.04/lb, while polypropylene edged up a half-cent and broke into positive territory after starting the month on a weak tone. Plastics spot-trading platform, The Plastics Exchange (TPE), said producers pushed back against an early call for a follow-through price decrease in July, instead holding PE contracts steady.

Polyethylene added another penny and has risen steadily throughout July, now up $0.04/lb, while polypropylene edged up a half-cent and broke into positive territory after starting the month on a weak tone. Plastics spot-trading platform, The Plastics Exchange (TPE), said producers pushed back against an early call for a follow-through price decrease in July, instead holding PE contracts steady. PE producers are looking to leverage recent market momentum into August in a bid to enable some or all of their $0.05/lb price increase. August PP contracts will follow polymer grade propylene (PGP), which is currently trading at a slight discount to July contracts. 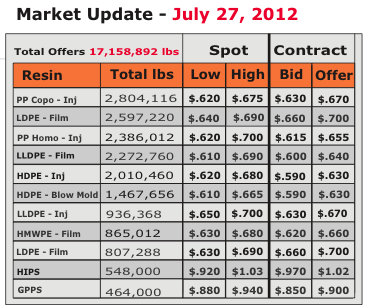 Energy markets "took a breather", according to TPE, giving back some recent gains. September crude oil futures slid $1.70/bbl, but held the $90/bbl support level, ending the week at $90.13/bbl. September natural gas futures also fell but managed to close above their psychological support of $3/mmBtu. The market ended the week at $3.015/mmBtu, for a $0.061/mmBtu loss. The crude oil : natural gas price ratio has been fairly steady around 30:1.

Ethylene's spot market inched higher in relatively limited trade. Gulf cracker complexes are still running smoothly, and the front-end of the market recouped most of the $0.015/lb loss seen in the previous week. Material for July delivery ended the week just shy of $0.49/lb, while August ethylene sold at a fractional discount. The forward curve steepened slightly and remains backwardated, priced down around $0.46/lb by the end of the year. After several weeks of strength ethane prices eased, shedding about $0.015/gal to finish at around $0.385/gal ($0.1625/lb).

Polyethylene (PE) picked up another penny on average last week. HDPE and other commodity grades continue to outpace the less active products. Generic prime railcar offerings have turned scarce, and while offgrade is more available, it is still limited. July PE contracts rolled flat and there was a $0.05/lb price increase nominated for August. National resellers with excess inventory have raised asking prices reflecting their replacement costs. The export market remains active, according to TPE, and Houston traders who had trouble finding orders a month ago are now moving material at a higher price. "Domestic demand remains in question," TPE CEO Michael Greenberg said, "while purchasing was very strong in June and continued during July, some has certainly been for re-stocking which will be important when the August nickel comes into play."

Propylene's spot market was quiet, with few deals transacted. PGP for July delivery slid almost a penny to around $0.485/lb, with material for August at about $0.49/lb. The market dropped $0.07/lb in the beginning of the month and has recovered somewhat, but remains at a several-cent discount to July contracts which rolled steady at $0.52/lb. "Unless something significant occurs, August PGP contract movement will also be benign," Greenberg said. TPE noted that the forward curve is currently in a normal contango, as prices gently rise to $0.5075/lb by December.

Polypropylene (PP) spot prices firmed about a half-cent, but there were few railcar offers made available and reseller inventories seem to be dwindling. Some grades are outright difficult to find, so if there is an urgent need for spot PP, one might expect to pay up a bit. Houston traders have also been able to move some of their excess stocks offshore; however, while there are buyers, export pricing is not great. Domestic spot demand is still lackluster, according to TPE which said that many processors are well-stocked from June purchases. Those shops are looking to sit tight: "without the imminent fear of a sharp increase, [processors] prefer to just watch the market for now.

The first quarter of 2012 saw sharp increases; PE tacked on $0.06/lb ($0.11/lb including Dec 2011), while PP jumped $0.215/lb. Much of the increases were due to the heavy cracker turnaround season and consequential tight monomer supplies. Fortunes reversed in the second quarter as even steeper decreases were implemented. PE dropped $0.14/lb and PP relief measured to $0.255/lb. The third quarter so far is well, just ho-hum; demand seems off and producers sitting with light inventories have been stingy with their resin. Contracts for both major commodity resin groups rolled flat in July and while spot Polyethylene has some upward momentum into the August $0.05/lb increase, contract PP price movement should be minimal. There are still some disruptive variables to watch for including the continued resurgence in export demand and potential storm-related disruptions in the Gulf.