The spot resin markets were active as July drew to a close, as most producers finally confirmed flat polyethylene contract prices for July and Generic Prime prices remained steady. Polypropylene contract prices also saw no change during July, but Generic Prime material firmed another penny, according to spot-trading platform, The Plastics Exchange (TPE). As July became August producers showed confidence in a $0.02-.04/lb increase slated for the new month. 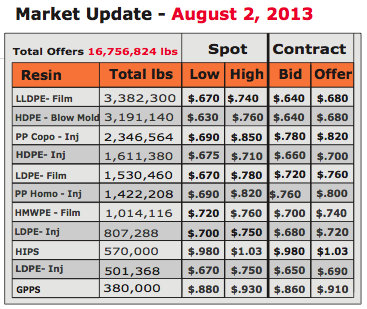 Energy markets moved in opposite directions, as September crude oil began the week under pressure, sliding a couple dollars, before recovering all the losses and then some to finish at $106.94/bbl, a net gain of $2.24/bbl. September natural gas futures continued to erode, dropping another $0.216/mmBtu to settle Friday at $3.347/mmBtu - the lowest close in a full year. Natural gas prices have slid more than $1/mmBtu since the end of May. The crude oil : natural gas ratio has now shot all the way back out to 32:1. Spot ethane prices gave back the last couple weeks of gains ending around $0.25/gal ($0.105/lb).

Ethylene's spot market began under pressure, but once again recovered late in the week. There were numerous transactions seen for July and August delivery with prices averaging around $0.5325/lb, more than a penny below week ago levels. The market later firmed back to $0.54/lb, but still recorded a half-cent loss. The shape of the forward curve is backwardated, but it continues to flatten with less than $0.015/lb separating prompt deliveries from cheaper end-of-the-year prices. Williams' Louisiana petrochemical facility, which was shut down in June due to an explosion, will remain offline through the first quarter 2014, but then return with significantly expanded capacity.

Polyethylene (PE) spot trading largely sputtered along, according to TPE CEO Michael Greenberg, with only a few spot deals to be done into month end. July PE contracts eventually settled flat across the board. LDPE and LLDPE rolled over during the previous week, but some producers maintained hopes for pushing HDPE up another $0.02/lb. "Domestic railcars of HDPE and LDPE are still somewhat scarce, while LLDPE is a bit more abundant, availability in general seems to be on an upswing," Greenberg said. "Demand was lax as domestic buyers felt little urgency to secure material; export interest was also limited and Houston prices slid." TPE reports that a "major" PE producer has nominated a $0.05/lb hike for September, but market participants have expressed confusion whether the intention was to finally give up on the $0.04/lb increase, or $0.02/lb in the case of HDPE, that has been hanging around for 5 months. "We will wait to see the wording from other producers and some might just leave that old increase out there," Greenberg said.

Propylene's spot market was active and quite a number of trades were seen concluded at higher prices as supply issues persist. By the end of the week, polymer grade propylene (PGP) for August delivery stood at $0.66/lb, another penny gain. Spot prices now exceed July contracts, which at $0.65/lb had rolled steady from June. Recent market conditions encouraged producers to seek a more aggressive $0.04/lb increase for August PGP rather than the original $0.02/lb originally discussed. The forward curve is fairly flat with less than a penny discount afforded for December deliveries. Refinery grade propylene (RGP) traded up to $0.58/lb and was subsequently bid "a tad higher," TPE reported.

Polypropylene's (PP) spot market was described by TPE as "interesting." Trading was active with the offgrade market weak while Generic Prime added a penny. High-priced offgrade railcars, which were actually offered above many Prime contracts during July, lost buyers' interest causing material to accumulate. Towards the end of the month, the offgrade market slid to meet demand while new price increases emerged to firm the Prime market back into a more logical premium position. Spot prices also fell in Houston as export outlets were limited and bids dropped. "Continued monomer production complications have PGP contracts nominated to increase $0.02-$0.04/lb," Greenberg said, "which after a steady July, points to higher PP contracts in August."

Brisk end of the month polypropylene trading helped to eek out a good-enough July, but the spot market in general struggled with inadequate demand. Polyethylene processors managed to mostly resist the $0.04/lb price increase ever since March-only $0.02/lb was implemented for HDPE in June. August contracts should be relatively quiet for PE; a nickel increase has been floated for September. PP buyers are facing a $0.04/lb price increase for August, with PGP monomer on the rise and overall tight resin supplies, at least some of it will go through. Spot export markets are still languishing through the summer, another round of Houston price drops might spark better demand.