Polyethylene was steady to a penny lower and polypropylene recorded its first gain in 10 weeks, rising one cent. Spot-trading platform The Plastics Exchange (TPE) noted that commodity resin prices were mixed as material availability tightened last week. Large decreases in contract prices for May and June have more than wiped away the increases implemented during the previous 6 months.

Polyethylene was steady to a penny lower and polypropylene recorded its first gain in 10 weeks, rising one cent. Spot-trading platform The Plastics Exchange (TPE) noted that commodity resin prices were mixed as material availability tightened last week. Large decreases in contract prices for May and June have more than wiped away the increases implemented during the previous 6 months. The total decrease for May/June PP contracts was $0.255/lb, and while June PE contracts have yet to fully settle, the 2-month total should be $0.12-$0.14/lb. TPE CEO Michael Greenberg said that the last few months saw resin inventory liquidation at the reseller and processor levels, shrinking spot supplies, and leaving some needs unfulfilled as particular grades for prompt shipment were becoming harder to find. 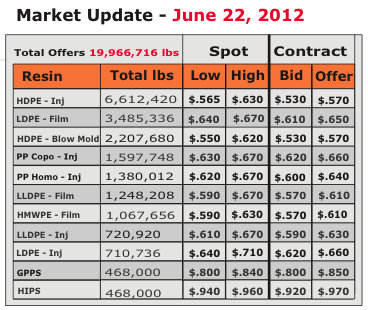 Energy markets were widely mixed, bringing the crude oil : natural gas price ratio back under 30:1 for the first time since mid-December. August crude oil futures plunged $4.57/bbl to end the week at $79.76/bbl, the lowest weekly close in about 9 months. August natural gas rebounded further, jumping $0.154/mmBtu to settle at $2.668/mmBtu on Friday.

Ethylene spot prices recovered somewhat as a couple of unplanned cracker complications sent some shock to the market. More than 11% of total cracker capacity is currently offline, TPE noted. Transacted volumes were relatively light, but they were enough to push the June ethylene price up $0.025/lb to $0.435/lb; it was indicated another penny higher on Friday. While the forward curve was marked up slightly, most of the week's gains were seen in the front 2 months. Ethane dropped $0.02/lb to end the week at $0.295/gal ($0.125/lb). Ethylene margins have contracted substantially, but are still very wide on a historical basis.

Polyethylene (PE) prices were steady to a penny lower while buying activity continued to improve. June contracts have yet to settle and while a decline of $0.04/lb was initially suggested, spot market pricing over the past couple weeks seems to indicate $0.07/lb, which would be the low-end of the range. Some believe a few more cents could also come out in July. Export demand appears to be improving as falling North American prices become more competitive on the global stage. While Houston packaging houses are still bagging resin, their warehouses are also generally jammed full, suggesting that not all that material is committed as sold. There is a wide range of PE prices currently quoted throughout the market, perhaps not surprising, the best deals are for resin already packaged in Houston, Greenberg said.

Propylene's monomer market stabilized after falling precipitously the last few months. The spot polymer grade propylene (PGP) market squeezed out a small gain for the second week in a row that together totaled, "an entire penny!", remarked Greenberg. PGP for June delivery last changed hands at $0.52/lb, which is essentially the price indicated for the balance of 2012. June PGP contracts were down $0.155/lb, also at $0.52/lb. "If prices along the crude oil chain remain depressed and propane continues to be a competitive feedstock for the crackers, there is a chance that propylene monomer could again become pressured when the rest of the crackers return from scheduled and unplanned maintenance over the next 45 days," Greenberg said. Refinery grade propylene (RGP) was flat to a tick higher in the $0.37-$0.38/lb range.

Polypropylene (PP) spot prices were up a penny this past week. "Wait, up? A typo? Nope, they were really up!," Greenberg joked. For the past few months, processors have been drawing down inventories waiting for a big price decrease and it came during May/June, as the material plummeted $0.255/lb. Buyers have since begun restocking, as contract orders are swift and the spot market is cleaning up. "There is still a decent amount of widespec offered, but generic prime is tough," Greenberg said. During April/May, spot PP prices were generally well below contract PP prices, leading to canceled contract orders and subsequently surplus upstream inventories, which in a circular fashion justified the sharp spot discount. However, the market corrected itself in June when contract PGP and PP prices fell dramatically eliminating the disconnection. After such a price break, Greenberg advised that it is wise for processors to re-build stocks to comfortable levels, "but perhaps not get too ahead of themselves - there is still the potential for the market to become vulnerable again when the rest of the crackers return to operation."

Resin market sentiment has strengthened from bearish to approaching neutral. While PE prices have yet to find a bottom, the PP market has stabilized, at least for now. Processors have enjoyed the hefty decreases over the past 2-months, which have erased increases dating back to December. Rebuilding resin stocks at these lower prices has been advised for the past few weeks, but don't over do it. Going forward the market could still move either way depending on energy and feedstock costs as well as domestic and international resin demand amidst all the global economic uncertainty. And as a reminder, although it is early in the Hurricane season, Tropical Storm Debby has already spooked the gulf, temporarily reducing oil/gas production - similar threats will loom over the next several months.