Average polyethylene (PE) prices shed another $0.02/lb, while spot polypropylene (PP) prices dropped another $0.04/lb last week, as lower prices were welcomed by buyers filling in supply gaps from the inventory drawdown while awaiting this price relief. Spot-trading platform, The Plastics Exchange (TPE), noted that while there were many transactions, volumes remained small since the overall sentiment continues to be that the market will continue to ease.

Average polyethylene (PE) prices shed another $0.02/lb, while spot polypropylene (PP) prices dropped another $0.04/lb last week, as lower prices were welcomed by buyers filling in supply gaps from the inventory drawdown while awaiting this price relief. Spot-trading platform, The Plastics Exchange (TPE), noted that while there were many transactions, volumes remained small since the overall sentiment continues to be that the market will continue to ease. May PE contracts, although offered by producers down $0.04/lb, could ultimately settle with a larger discount. May PP contracts settled down $0.10/lb along with polymer grade propylene (PGP). 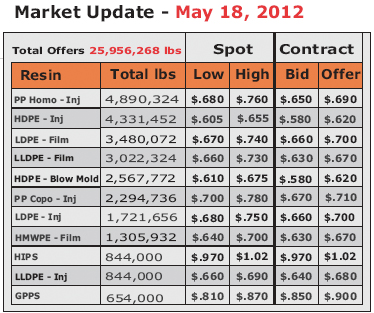 Energy markets continued their recent trend of lower crude oil and higher natural gas prices. July crude oil futures, which are rolling to the front month, dropped $4.69/bbl to $91.80/bbl, the lowest level in about 6 months. July natural gas prices rallied $0.233/mmBtu to end the week at $2.822/mmBtu; so that it now sits about $0.70/mmBtu above levels from 30 days ago. The crude oil : natural gas price ratio contracted to 32.5:1, the tightest since December. TPE noted that the spread was at 51:1 just a month ago.

Ethylene spot prices fell further in what TPE called another "action-packed" week. Monomer supplies have increased as the turnaround season nears completion, with nearly 90% of total cracker capacity currently operational. Ethylene for May delivery shed $0.025/lb to last trade just below $0.52/lb. TPE CEO Michael Greenberg pointed out that just six weeks prior, spot ethylene was priced around $0.75/lb. Transactions were also seen in the forward months and while prices for the balance of 2012 remain pressured, the curve has flattened considerably. Ethylene for June delivery was at $0.5125/lb and July just a half-cent back. Material for delivery in the third quarter was around $0.50/lb with about a $0.02/lb discount needed to garner fourth quarter interest. Although ethylene margins have shrunk as the monomer price sunk. They are still very wide on a historical basis. Ethane ended the week just under $0.42/gal (almost $0.18/lb), providing the cracker with an inexpensive feedstock.

Polyethylene spot prices slid another $0.02/lb, pushing the market down $0.08/lb over the past six weeks. Falling energy and feedstock costs have contributed to the negative sentiment gripping the market. Producers have offered to drop May contracts by $0.04/lb and in the meantime have been generally willing to meet lower-priced competitive situations with downgraded prime material, according to TPE. Domestic purchasing is very sluggish as processors work down their inventories, causing producers' inventories to swell. The export market is very tough and currently not providing an ample outlet to offset these growing supplies. Houston traders are still caught with material and are just looking to unload quickly and mitigate losses, most are not ready to make new speculative purchases, regardless of price.

Propylene for May delivery fell all the way down to $0.53/lb, before jumping nearly 2-cents to $0.5475/lb and then ending the week offered in-between. After such a fast break from the high $0.70s/lb, the spot propylene market found relative value in the low $0.50s/lb, and the forward curve is now fairly flat, priced at similar levels throughout the balance of the year. These spot prices are well below May PGP contracts, which at $0.675/lb, were down $0.10/lb from April. This currently points to another double-digit decrease for June, but then the down-leg of the cycle might be played out, Greenberg pointed out. Refinery grade propylene (RGP) trading has been illiquid and was last indicated in the mid-to higher $0.40s/lb.

Polypropylene (PP) spot prices tumbled $0.04/lb as some of the market-leading whisper prices have become more widespread. May PP contracts settled down $0.10/lb, which priced branded prime PP homopolymer in the mid-high $0.70s/lb, but with plenty of generic prime resin available in the spot market in the high $0.60s to low $0.70/lb. Still, demand for generic prime is not robust even at sharp discounts, as buyers think June contracts could lose at least another dime. Good widespec railcars are mostly in the mid $0.60s/lb, lower quality PP resin can be bought in the low $0.60s or below. Offshore sales to Latin America are "limping along", according to Greenberg, who said fact is the "highlight of the dismal PP export market."

What goes up must (eventually) come down and now is the time for plastics. Hefty first quarter price increases, driven by tight monomer supplies due to mostly planned maintenance outages, brought the market to lofty levels that could not be sustained as the crackers began coming back to production. Processors bought heavily ahead of the increases and now that the peak price is past and downstream inventories are being drawn down, there is a vacuum in resin demand. Falling crude oil prices are lowering the floor for export sales, while soft and uncertain economic conditions have further curtailed international resin demand. The market correction is sharp and will continue into June, but from there the second half of 2012 needs to be evaluated.