Prices rose and the spot resin markets were busy again last week. Demand continued to improve, particularly for polypropylene (PP), and while resin continued to flow at a relatively swift pace, well-priced offers were snatched up, according to spot-trading platform, The Plastics Exchange (TPE). TPE anticipated a modest decrease in May PP contracts.

Prices rose and the spot resin markets were busy again last week. Demand continued to improve, particularly for polypropylene (PP), and while resin continued to flow at a relatively swift pace, well-priced offers were snatched up, according to spot-trading platform, The Plastics Exchange (TPE). TPE anticipated a modest decrease in May PP contracts. PE producers are trying to implement a $0.04/lb increase that was rolled over in April. 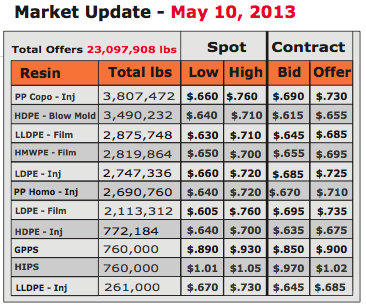 Ethylene spot prices moved higher in fairly active trading. The market was initially bid up a couple cents early in the week and finally jumped a total of $0.04/lb at mid-week to levels above $0.58/lb. Ethylene for May delivery changed hands at $0.585/lb on Friday. The rally caused the front month's premium to expand to about $0.04/lb over the December 2013 price. TPE noted that there are currently three crackers offline for maintenance. Ethane slid a penny to $0.28/gal ($0.118/lb).

Polyethylene (PE) trading was about average, with offerings for most grades, but not in over-abundant volumes. Offgrade was more available than generic prime and the market ticked a penny higher across the board. Producers are taking another shot at the $0.04/lb increase that didn't take hold in April, TPE CEO Michael Greenberg said, while processors are instead seeking some relief from the $0.09/lb hike endured in the first quarter. PE's domestic demand was light in April. At 2.42 billion lb, it was almost 140 million lb below the trailing 12-month average. PE exports ran at 600 million lb, about 5% less than the 12-month average. Producers countered the slack demand by throttling back April production to 90% of capacity. Collective upstream PE inventories drew down 40 million lb to begin May with 3.25 billion lb on hand, a level that is still 200 million lb above than the 12-month average.

Propylene spot trading was subdued, but the polymer grade propylene (PGP) market still firmed, cracking the $0.60/lb barrier. A single transaction for May PGP was reported at $0.605/lb, which was up $0.0075/lb. The forward curve maintained its slightly backwardated shape, with all prices throughout the balance of 2013 indicating within a penny of prompt levels. May PGP contracts have not settled yet but are currently nominated to decrease by just a penny. Refinery grade propylene (RGP) was fairly flat, coming in at the low $0.50s/lb.

Polypropylene (PP) experienced a significant increase in spot trading and prices advanced $0.015/lb. Firming monomer markets will limit the May PP decrease to only $0.01-$0.02/lb. The spot market seemed to have bottomed in early May and has recently found further support from stronger exports, lifting the floor in the U.S. Domestic processors that worked their inventories too low expect more price erosion and were also back in the market with both hands, according to Greenberg. Domestic PP processors began rebuilding resin stocks in April and collectively procured 1.33 billion lb of material; an amount that was about 180 million lb more than the previous 2-month average but still 40 million lb less than the trailing 12-month average. Exports were finally back above 50 million lb, and while not a huge overall factor, it did help soak up offgrade material. Producers still managed to over shoot demand, running reactors above 90% for just the second time in 8 months, to build 20 million lb of inventory. They started May with 1.62 billion lb of PP on hand, the most in a year.

Spot trading activity was swift, demand was solid, and prices moved higher. Overall availability is still ample, but some grades are now hit or miss. We are seeing a pickup in export demand for both PE and PP, lending support to the market. May contracts for PE and PP are still up in the air, but should see only minor movement.