Average polyethylene (PE) prices ticked up about $0.005/lb, while polypropylene (PP) shed a penny last week. The spot resin market was quieter and demand was off, according to spot-trading platform, The Plastics Exchange (TPE), and while the market remains relatively well-supplied, some of the cheaper railcar offers formerly available are now gone.

Average polyethylene (PE) prices ticked up about $0.005/lb, while polypropylene (PP) shed a penny last week. The spot resin market was quieter and demand was off, according to spot-trading platform, The Plastics Exchange (TPE), and while the market remains relatively well-supplied, some of the cheaper railcar offers formerly available are now gone. Houston traders and national distributors are working to unload surplus materials already warehoused, and their pricing is generally aggressive, according to TPE CEO Michael Greenberg. PE producers are pushing for a $0.05/lb increase in November contracts, seeking to implement the increase for the sixth straight month. Over that time, there has actually been three PE price decreases. Polymer grade propylene (PGP) and PP contracts slid $0.06/lb in November, and have now dropped $0.20/lb over the last 2 months. 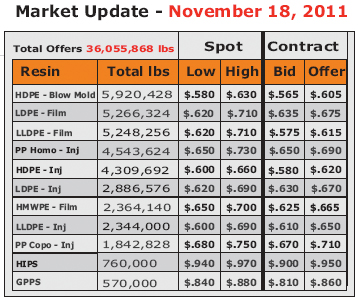 Energy prices were lower as January rolled to the front month futures contract. January crude oil futures rose early in the week, reaching above $103/bbl before giving back the gains and then some to settle at $97.67/bbl on Friday, with a net weekly loss of $1.22/bbl. January natural gas futures fell further, dropping another $0.20/mmBtu to end the week at $3.496/mmBtu. The crude oil : natural gas price ratio is at a historically wide level of 28:1. Those favorable feedstock costs are helping integrated PE producers maintain a solid base of exports.

Ethylene spot prices extended recent gains in light-volume trading. Ethylene for both November and December delivery last changed hands at $0.5175/lb, up $0.0075/lb for the week. There was limited interest in ethylene for future months, with pricing for the next 6 months quoted near the spot price. Ethane prices dropped a large $0.075/gal to $0.8375/gal, helping to re-establish very healthy margins for the production of ethylene. Ethylene's net transaction price (NTP) for October was $0.54/lb, down $0.005/lb. The NTP for November has yet to be determined.

Polyethylene's (PE) spot market was a little slower and purchase orders were generally harder to find than resin. Still, prices were steady to a half-cent higher last week, as some of the over-hanging surplus inventory found its way offshore. After reducing average contracts by $0.05/lb in October (in some cases only $0.03/lb), PE producers remain intent to implement their $0.05/lb price increase, although well-priced material offered into the spot market does not support the initiative. Greenberg noted that word began to circulate last Friday that another increase was forthcoming for January, with as much as $0.07/lb to be nominated. There is already a $0.06/lb increase on the table for December.

Polypropylene (PP) spot prices eased a penny ter two weeks of steady pricing, the spot market eased a penny. November PP and PGP contracts settled this past week down $0.06/lb, $0.02/lb more than initially nominated; the added decrease weighed on spot prices. Material availability was a little better and more widespec railcars were shown to the secondary market. Although processors are generally looking to reduce inventory into year-end, an eye should be kept on the forward monomer market. PGP for the first quarter of 2012 is currently indicated several cents above spot levels, and if the pricing holds there could be a modest bump in PP prices to usher in the New Year.

This past week saw a steady flow of spot material and mildly mixed prices. PP contract buyers received the full $0.06/lb decrease for their November purchases; PE negotiations are again going late into the month. With Thanksgiving just around the corner, resin buyers are wondering what kind of special buying opportunities will be available in December. No doubt producers will try to move out excess inventory and position themselves to regain pricing power in January. The spot market is always tight after the New Year, so if phenomenal deals are presented in late Nov and during December, it might be a good idea to secure a little extra material to keep on hand.