Spot prices held steady and resin trading picked up as November drew to a close. Trading platform, The Plastics Exchange (TPE) said there was a good enough flow of Generic Prime resin to enable "special opportunity pricing," enabling strong transitional volume. Although it took until the end of the month, producers finally backed off their $0.05/lb polyethylene price increase and several officially lowered November contracts by $0.02/lb. Polypropylene contracts settled up $0.04/lb earlier in the month.

Spot prices held steady and resin trading picked up as November drew to a close. Trading platform, The Plastics Exchange (TPE) said there was a good enough flow of Generic Prime resin to enable "special opportunity pricing," enabling strong transitional volume. Although it took until the end of the month, producers finally backed off their $0.05/lb polyethylene price increase and several officially lowered November contracts by $0.02/lb. Polypropylene contracts settled up $0.04/lb earlier in the month. Exports to Latin American markets were good and, TPE CEO Michael Greenberg noted that European traders "came sniffing" while Asian and Indian buyers were quieter. 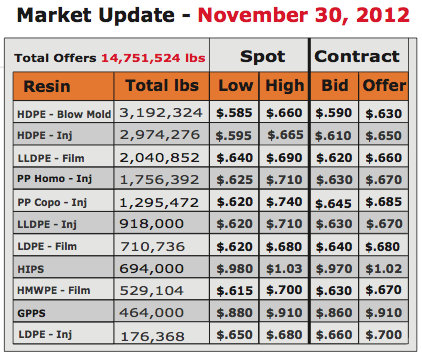 Energy markets moved in opposite directions, as January crude oil futures continued to rally, adding another $0.63/bbl to end the week $88.91/bbl. January natural gas futures plunged more than 11%. After finally closing above $4/mmBtu the previous Friday, the bottom fell out of the natural gas market, and it dropped a staggering $0.469/mmBtu to settle at $3.561/mmBtu on Friday. With trends diverging, the crude oil: natural gas ratio expanded back out to 25:1.

Ethylene's spot market was very active and volumes were high, but in the end there was relatively little price movement. A few crackers are offline for short-term unscheduled maintenance. Once again, ethylene for delivery through the end of this year changed hands on both sides of $0.51/lb. There was good action seen in forward months too, according to Greenberg, and the curve has taken on an what he called an "interesting shape", with a premium for the first quarter of 2013 and then discounts to prompt for the second half of the year. Ethane prices fell a sharp 10% to end the week at $0.2625/gal ($0.116/lb).

Polyethylene (PE) trading was active, and the volume of offers increased as producers looked to push out material before month-end. Despite producers' intent to implement the already twice failed $0.05/lb increase, spot material was discounted throughout November and anecdotally, a number of contract orders shifted to spot. At the end of the month the increase was again scrapped and a net $0.02/lb decrease was put in place. "It seems that availability will remain ample in the near-term and at least one producer has cancelled their $0.05/lb increase all together rather than trying again in December," Greenberg said, "but be on the lookout for a January nomination, it will surely come."

Propylene's spot market was busy and while prices edged higher, they remained in a tight range. Polymer grade propylene (PGP) for delivery through the end of the year transacted several times, mostly around $0.545/lb. December PGP contracts have been nominated flat to November's $0.57/lb but could likely see a small decrease based on spot levels and seasonal softness. The forward curve flattened with a $0.02-$0.025/lb premium indicated for material for the second half of 2013. Refinery grade propylene (RGP) was steady to a tad weaker at $0.50-$0.505/lb.

Polypropylene (PP) availability improved and there was a very wide range of prices shown to the market. There were still railcars of relatively expensive Generic Prime PP looking for disposition and offgrade railcars were nicely discounted. Spot transactional prices never reached the level reflecting the $0.04/lb cost-push price increase secured for November contracts so even with weakness in short-term sentiment developing, Greenberg said TPE will call the market net steady again last week. "While PP contracts could shave a tad in December, the outlook for the first quarter is friendly, so if great end of the year deals are presented, it might be a good idea to sock a few away," Greenberg said.

Special holiday priced offerings came a little early this year and there will likely be more to come in December. The market is not awash in resin, but some good deals are around. Premium polyethylene resins like Higher Alpha Olefins and High Clarity film grades seem to be marked down to more commodity-like prices which is an indication of inventory lightening. These margins generally expand back to normal levels when the purge is complete. The market could see some easing in December, but nothing severe. We expect nominations for January price increases so adding well-priced material to the resin coffers could prove fruitful.