Spot polyethylene (PE) prices were steady to down a penny and polypropylene (PP) prices eroded another $0.04/lb, as spot resin trading slowed a bit last week. Spot-trading platform, The Plastics Exchange (TPE) noted that the market remained under pressure and offers accumulated amid lackluster demand. Resin contracts are settling lower, with PP buyers on average paying $0.14/lb less for branded prime purchases in October, while PE market participants are still sparring regarding the price break for October.

Spot polyethylene (PE) prices were steady to down a penny and polypropylene (PP) prices eroded another $0.04/lb, as spot resin trading slowed a bit last week. Spot-trading platform, The Plastics Exchange (TPE) noted that the market remained under pressure and offers accumulated amid lackluster demand. Resin contracts are settling lower, with PP buyers on average paying $0.14/lb less for branded prime purchases in October, while PE market participants are still sparring regarding the price break for October. Initial indications are that it will be somewhere between $0.03 - $0.05/lb. 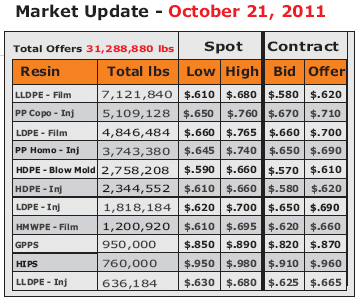 Energy markets were mixed and front month futures contracts rolled to December. Crude Oil futures continued their recent winning ways, rallying $0.40/bbl to end the week at $87.840bbl. December natural gas futures eased $0.074/mmBtu, to settle at $3.629/mmBtu on Friday. The crude oil : natural gas price ratio expanded back out to 24:1, much to the benefit of North American integrated PE producers compared to their international counterparts.

Ethylene's spot market began to recover after sharp losses during September and two weeks of essentially steady pricing in October. Early in the week, ethylene for October delivery traded a tad higher to $0.485/lb, but was subsequently bid as high as $0.52/lb. Similar bids and/or trades were seen in forward markets for the next several months. Ethane prices rallied further, reaching $0.94/gal, but the larger gain in spot ethylene was enough to expand margins. Operating rates hovered in the lower 90s%.

Polyethylene (PE) price pressure persists, with a penny falling from virtually all products. TPE CEO Michael Greenberg noted that some "super-sharp spot specials" in the secondary market had spurred sales and satiated short-term demand, while producers and processors pursue prime pricing for October contracts. The gap remains at $0.02/lb, as suppliers have offered to decrease prices by $0.03/lb while buyers seek a full nickel of relief. Inventories are heavy and a challenging spot export market, particularly to key Indian and Asian regions, has made it difficult to purge excess supplies. However PE prices have been falling and the U.S. dollar has become weaker, while crude oil, which is the primary feedstock for PE elsewhere globally has been rallying. "Together this all moves in the same direction to help spur renewed demand for U.S. material," Greenberg explained.

Propylene prices continued to slide in the beginning of the week, but they recovered by Friday, and the overall the market was fairly stable considering the recent sharp losses. Refinery grade propylene RGP fell as low as $0.425/lb before bouncing to last trade at $0.45/lb, still down a half-cent for the week. PGP prices actually added a penny, last transacting at $0.55/lb; Nov PGP traded as high as $0.57/lb, but these prices are still well below the October PGP contract settlement of $0.64/lb, which was down $0.14/lb from Sept. The forward market through 2012 is indicated higher than current spot.

Polypropylene (PP) spot prices shed yet another $0.04/lb, bringing offers for generic prime resin well below average October contracts, which were down $0.14/lb along with the same drop in polymer grade propylene (PGP) contracts. Market participants are looking ahead to the November market, which is indicated sharply lower again based on recent spot PGP levels. Processors have limited contract railcar orders preferring to buy next month, and suppliers facing burdensome inventories countered by discounting the material now to generate additional spot sales. Spot PP prices have fallen $0.15/lb so far during October and currently sit $0.33/lb below the peak price reached in May.

Resin prices continued to drop this past week, once again PE more so than PP. Do note though that stable/recovering spot monomer costs, coupled with the resilient stock market and rising crude oil prices, could begin to lend at least psychological support to plastics prices. While spot resin could be carried still lower on momentum, there seems to be value at these levels. Unless new fundamentals come to affect the market, we could be getting close to the bottom of this cycle, at least in spot. PP contracts will most likely fall again in November, and PE contracts could have a little more downside if only $0.03/lb officially comes out of the market in October. Incremental spot exports have the potential to resume, but this has still yet to develop.