Polyethylene (PE) was $0.005-$0.01/lb lower, pressured by weak exports and negative sentiment, while spot polypropylene (PP) rose $0.015/lb, driven by Hurricane Sandy related disruptions that affected monomer production and resin reactors. Spot-trading platform, The Plastics Exchange (TPE), noted that energy, commodities, and stock markets were all lower ahead of the U.S. presidential election on Nov. 6, with TPE positing that "some anxieties should be relieved this coming week, perhaps new ones will also develop." TPE said there was minimal movement in October commodity resin contracts, with price increases nominated for November. 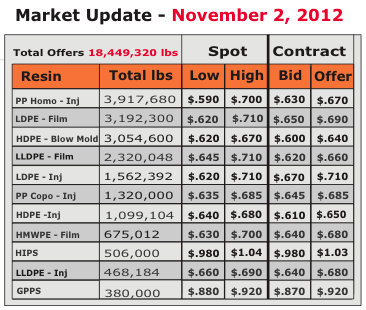 Energy markets were "choppy" and prices fell again in nervous trading, according to TPE. December crude oil futures spent much of the week in higher territory but dropped sharply on Friday, erasing earlier gains to settle at $84.86/bbl, a net loss of $1.42/bbl. December natural gas futures peeled off another $0.207/mmBtu to end the week at $3.554/mmBtu, more than $0.40/mmBtu lower than the previous week's peak. The crude oil : natural gas ratio expanded slightly, to almost 24:1, but it is still near the tightest level in a year.

Ethylene's spot market reversed course, giving back the $0.03/lb gains acquired in the previous week. A few crackers remain offline for both planned and unscheduled maintenance. Ethylene for November delivery last changed hands at $0.545/lb, but was bid a tad higher by week's end. While the forward curve remains backwardated, TPE CEO Michael Greenberg said that it flattened out somewhat as the bulk of the losses were taken from the prompt months' premiums. Prices are currently indicated to drop about $0.005/lb each month during 2013, and ethylene for delivery 12 months out is priced around $0.49/lb. Ethane eased, ending the week at $0.3075/gal ($13/lb).

Polyethylene (PE) availability was good and prices slipped $0.005-$0.01/lb. Weak export demand and falling crude oil prices have lowered the floor price that had been supporting the domestic market. For the second month in a row, PE producers were unable to implement their $0.05/lb price increase. Greenberg said that going forward, he was "sure they will give it another shot in November, but the market seems a bit tired." With incremental orders scarce, traders are limiting fresh purchases and instead lowering prices and looking for bids to unload their uncommitted inventory. Producer inventories have grown, but coming from historically low levels "there is still plenty of room to build if need be," Greenberg said. "In the meantime, limited outlets for less desirable offgrade have widened the discount required to move that material."

Polypropylene (PP) spot prices jumped $0.015/lb fueled by higher feedstock costs and a price increase announcement, while Hurricane Sandy also caused some regional supply disruptions. TPE said a pretty good flow of offgrade PP railcars were seen at the end of the month, but generic prime offers disappeared when November PGP monomer contracts were nominated to increase as much as $0.07/lb. The month is just beginning and while some level of increase is likely, the full seven is considered steep. Exports have not been much of a factor, but interest from the India/Asia markets is starting to brew again at low bid levels.

October saw price deviation between the two major commodity resin categories. Polypropylene contracts added $0.015/lb and spot saw equal strength this past week. Despite the nickel nomination, polyethylene contracts settled flat late in the month, and the lost momentum carried over as spot PE prices slipped as much as a penny this past week. There are sizable increases on the table for November: PE +$0.05/lb and PP +$0.07/lb, but also still plenty of time to see how the markets shape up. Best wishes for our friends and colleagues impacted by Hurricane Sandy, we hope the recovery is swift.