Softness developed in spot-resin-market sentiment last week as markedly more material was offered. Producers seeking disposition of railcars before month end and an increase in availability from traders and stocking distributors looking to unload inventory were the culprits for the sentiment change, according to spot-trading platform, The Plastics Exchange (TPE). TPE noted that the market is not "awash with resin", with overall supplies still considered tight, especially at the producer level.

Softness developed in spot-resin-market sentiment last week as markedly more material was offered. Producers seeking disposition of railcars before month end and an increase in availability from traders and stocking distributors looking to unload inventory were the culprits for the sentiment change, according to spot-trading platform, The Plastics Exchange (TPE). TPE noted that the market is not "awash with resin", with overall supplies still considered tight, especially at the producer level. Polypropylene (PP) contracts only rose a penny in September despite larger increase nominations, while polyethylene (PE) contracts were mostly steady. Price increase letters have been issued for October, but, as TPE CEO Michael Greenberg explains: "The supply side is still fundamentally bullish, so it will likely come down to demand." 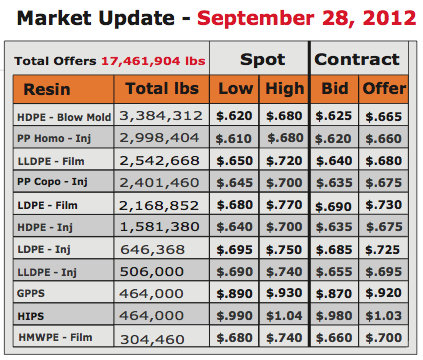 Energy markets moved in opposite directions last week, as crude oil prices continue to slid after topping $100/bbl a couple weeks ago. November's futures contract dropped another $0.70/bbl to settle at $92.19/bbl on Friday. November natural gas futures took off to the upside, adding $0.249/mmBtu, about 8%, to end the week at $3.32/mmBtu. The crude oil : natural gas ratio contracted all the way in to 27.7:1, its tightest level since November 2011.

Ethylene's spot market started lower but then moved higher in fairly active trading. There were some transactions in the forward market, but the bulk of the deals were done for prompt delivery, with the most recent trades for September and October seen around $0.60/lb, up about $0.025/lb for the week. The price gains were mostly up front steepening the forward curve. The premium from prompt to December expanded past $0.04/lb while ethylene for delivery 12 months out was discounted more than a $0.10/lb from current levels. The ethane market bounced back from pressure earlier in the week when prices dipped into the very high $0.20s/gal. Prices ended around $0.3275/gal ($0.138/lb), up $0.01375/gal. "Ethylene margins at $0.46/lb are superb," Greenberg noted.

Polyethylene's (PE) spot market eased with prices sliding $0.005-$0.02/lb depending on the grade. Greenberg said that compared to previous weeks, when offers were scarce and spot material was coveted with a premium price, sellers had railcars that were still seeking buyers at month-end. HDPE blowmolding grades, which had been particularly tight, became more available and saw the biggest price drops. TPE saw some better supplies of film grades, but price cuts there were more modest. "After three months of excellent demand, it seems that purchasing activity was off a bit in September," Greenberg said, "likely due to ample downstream inventories from restocking efforts." PE contracts were mostly steady this month, although buyers who only took on a $0.03/lb increase in August took on an additional $0.02/lb. Increases between $0.03 - $0.06/lb have been nominated for October, but the high end of the range currently seems unlikely, according to Greenberg.

Propylene supplies seem sufficient, according to TPE, despite the fact a few units were taken offline for scheduled maintenance, and petrochemical producers continue to crack propane along with ethane. A lone polymer grade propylene (PGP) transaction was completed at $0.515/lb for September, the same level as contracts, which were up just $0.01/lb from August. It was a softer increase than the $0.025 -$0.04/lb initially nominated. Producers are again asking for as much as a $0.04/lb hike in October. Offers for October PGP at or below September pricing have emerged, which could limit advancements in October contract pricing. October refinery grade propylene (RGP) last changed hands at $0.405/lb, a couple cents below the recent September level.

Polypropylene (PP) spot prices shaved about a penny amid better availability and waning sentiment. September appeared slower as buyers backed away from purchases after the best 3-month period of demand since 2007. Processors generally report that their inventories have been restocked, and given the relative stability in pricing over the past few months, TPE says they feel no need to chase additional material in the spot market. Producers' PP inventories have been at historically low levels, Greenberg said, so the fact that a few generic prime railcars appeared at month end was clear evidence of softer demand. The vast majority of PP contracts are still tied to a monomer directly or to an index that has been locked in step with PGP contracts. Given that, Greenberg said, "Regardless of mostly bullish supply/demand dynamics, resin contracts will again just follow propylene in October."

After 3-months of stellar commodity resin demand, overall activity was subdued in September and the markets eased a bit into month-end. Although upstream resin supplies remain limited, availability has begun to improve. Higher prices during the first part of the month challenged spot exports and asking prices have subsequently moderated both from producers and exporters with material on hand. Despite increase nominations, resin contracts for both PE and PP saw little price movement in September, but producers will give the increases another go in October.