Market overview: Abundant resin offers and falling prices marked the last week of the 3rd quarter, as a negative sentiment gripped the markets, sending energy, feedstock and plastics prices lower. Generic Prime polyethylene (PE) and polypropylene (PP) were readily available and average prices for each slipped another penny, while widespec and high volume buyers saw special spot opportunities, according to spot-trading platform, The Plastics Exchange (TPE). The continued worries over the global economy have strengthened the dollar, limiting the export outlet into what TPE describes as already weakening international resin markets. Average PE and PP resin contracts rolled flat for the second month in a row, contracts are called lower for October. 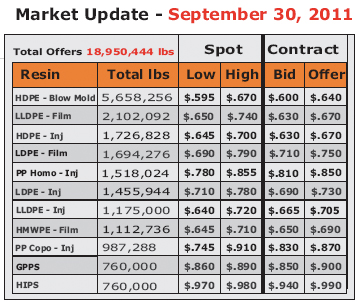 Energy markets started the week strong but gave back all the gains and then some by Friday, with November Crude Oil futures finishing the week at $79.20/bbl after almost reached $85/bbl, with a net loss of $0.65/bbl. TPE notes that this was the lowest closing crude price in about a year. November Natural Gas futures shed another dime, settling at $3.666/mmBtu on Friday, which also marks the lowest front month settlement in about a year. With both markets falling, the crude oil : natural gas price ratio was relatively stable at 21.6:1.

Ethylene prices continued to unwind, falling sharply again in very heavy trading. The entire forward curve moved lower and is now fairly flat as the premium for prompt delivery has been eliminated. Ethylene for delivery over the next several quarters traded on either side of $0.50/lb most of the week and then moved down into the high $0.40s/lb on Friday. Material for delivery in October last traded on Friday at $0.485/lb, which was $0.0425/lb below the price September ethylene sold for at the end of the previous week. Ethane prices continue to rally squeezing ethylene margins into the low teens, well below the $0.25-.30/lb margins seen earlier in the year, but still quite healthy on historic terms. Ethylene started September priced around $0.63/lb, the spot price fell 23%, nearly $0.15/lb, during the month; TPE's reaction, "Wow!".

Polyethylene's (PE) average spot prices dropped a penny last week, although some large processors and buyers of widespec resin took advantage of steeper quarter-end discounted deals. Most PE contracts were flat in September, just as they were in August. TPE noted that technically there is a $0.05/lb price increase still out there and it is the 6th attempt to implement it, but processors are instead clamoring for a piece of the cost relief seen in upstream ethylene, particularly spot monomer. Countering this notion, producers contend that although ethylene has come off, ethane prices have risen creating cost pressures. "That is a difficult argument to sell downstream in this environment," TPE CEO Michael Greenberg said. "There is plenty of material around, the spot export arbitrage is closed, while economic and market sentiment is fading fast," adding that his firm anticipates lower PE contracts in October.

Propylene prices were "pummeled" last week, according to TPE, in relatively light trading activity. Refinery grade propylene (RGP) sold all the way down to $0.55/lb for a weekly loss of $0.09/lb. Polymer grade propylene (PGP) did not transact, but was offered at $0.71/lb, well below the previous deal done, without substantial buyer interest emerging. Financially settled PGP contracts were offered even lower in the mid-$0.60s/lb. September PGP contracts were priced at $0.78/lb; October contracts have not settled, but negotiations are underway. Several market participants have indicated that a sharp decrease, perhaps as much as $0.10/lb, was in the cards.

Polypropylene's (PP) market remains pressured by weak demand, falling feedstock costs, ample inventories and a virtually non-existent export market. Generic Prime PP prices came off another $0.01/lb this past week, while offgrade prices fell even more, widening the gap required to move the lower grade material. Although September PP contracts were again flat, spot PP prices eased $0.03/lb during the month in anticipation of lower prices in October. Weak spot monomer markets are pointing to lower PGP contracts in September, if $0.08 -$0.10/lb indeed comes out of these feedstock costs, similar savings will be passed along to PP contract buyers in October.

The third quarter began on an upswing, but ended with a whimper. Disappointing demand, world-wide economic uncertainty, a strengthening U.S. dollar, and falling energy and feedstock costs changed North American resin market sentiment from cautiously bullish to nervously negative. PE prices in October are again nominated to increase $0.05/lb, but that seems doubtful and a decrease is actually more likely. PP prices will be lower, but at the moment the extent is still uncertain. Nonetheless, processors are eager to enjoy some anticipated contract price relief.