Market overview: Spot resin trading was swift last week, as polyethylene (PE) and polypropylene (PP) moved in opposite directions thanks to shifts in their respective spot monomer costs. 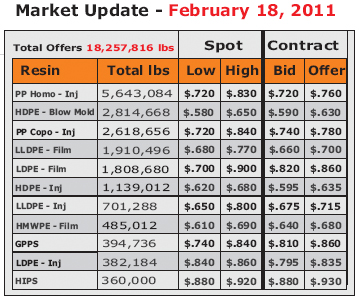 Ethylene spot prices traded sharply higher, but then ended the week under pressure. Once again more than 200 million lb of ethylene changed hands in the spot market. Ethylene for February delivery traded as much as $0.05/lb higher to $0.535/lb, but the market was offered back down to $0.495/lb on Friday. TPE said that supply disruptions are at the forefront of concern as new operational issues have arisen while other previously downed crackers returned on stream. Although transactions were seen throughout 2011, the higher prices were concentrated in the nearby months.

Polyethylene spot prices were mostly higher with major commodity grades, including high-density (HDPE) blowmolding and linear low-density (LLDPE) butene adding $0.015/lb, while others saw only modest gains. Several PE producers split the current $0.05/lb increase to $0.03/lb for February and $0.02/lb for March. Spot trading intensified as rising spot ethylene prices gave support to the February increase initiative. TPE CEO Michael Greenberg said some buyers scrambled to procure generic prime railcars on the ethylene spike, while some offers that were priced steady to January were actually pulled off the table amid the rising costs.

Propylene's spot market saw good activity and prices fell precipitously, with refinery grade propylene (RGP) for higher-volume pipeline delivery trading as low as $0.62/lb and finishing the week at $0.63/lb. This new level is about $0.08/lb below the previous week's market. Spot polymer-grade propylene (PGP) was offered at $0.70/lb, a nickel below the last transaction. A market-wide settlement for February PGP contracts was reached at $0.775/lb, which is a rollover from January. The new propylene dehydrogenation unit in Texas is back on-line producing prime PGP once again.

Polypropylene's spike-top is in place, according to TPE, including the $0.04/lb that came out last week, the market has quickly unwound half of the $0.20/lb gain seen in December and January. Resellers have aggressively dropped asking prices to eliminate uncommitted inventories, and in some cases, producers have lowered generic prime railcars below the price of contract PGP monomer. Greenberg noted that processors have been limiting their resin purchases to avoid buying too much high-priced PP, which leads TPE to anticipate pent-up demand. PP contracts had rolled steady in February, so the question it asks is "How much will they drop in March?"

Volatile feedstock costs have created an exciting spot resin market. The $0.05/lb PE price increase might now find some success at the reduced level of $0.03/lb. Good exports to Latin America and Europe are helping to soak up surplus resin supplies. Spot PP and propylene monomer prices are falling and will lead to sharply lower contract prices in March. Some estimate the relief can be between $0.08 - $0.12/lb, but hey, it is still only February!