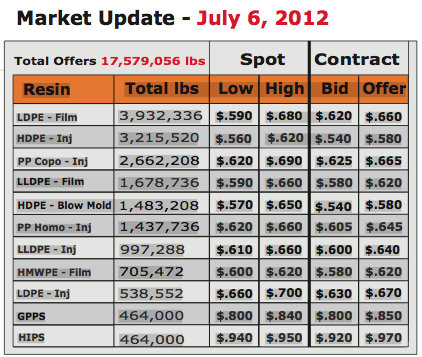 Energy markets extended their gains, but then gave way at the end of the week to actually close lower. August crude oil futures reached nearly $89/bbl, the highest level since late May, but fell back to settle at $84.45/bbl on Friday with a net loss of $0.51/bbl. August natural gas prices surged above $3/mmBtu for the first time since February, before collapsing to end the week at $2.776/mmBtu, down almost a nickel. The crude oil : natural gas price ratio expanded marginally to 30.4:1.

Ethylene spot prices were fractionally higher, with limited gains as several crackers returned from both scheduled and unplanned maintenance. There are still a few crackers offline from the heavy turnaround season, but production at the moment already seems ample. July ethylene changed hands several times last week, with the most recent at $0.4275/lb, up 3⁄4 cent. The forward ethylene curve remained fairly flat with a slightly negative bias. The ethane market was a tad weaker, with values pegged around $0.29/gal ($0.122/lb) on Friday.

Polyethylene (PE) prices firmed, with gains as much as a penny seen for some grades. After the quarter-end purge, material availability has tightened somewhat, further restricted by the mid-week Independence holiday and many market participants taking vacation. TPE CEO Michael Greenberg believes offers should improve in the coming week. He noted that there are still a wide range of prices quoted throughout the market, but the low-end seems to have cleaned up a bit. The slight strength is built on producers' current efforts to prop up Houston export prices by about $0.02/lb, as well as the nomination of a $0.05/lb increase for August contracts. There was technically an old price increase on the table for July, but it was never really in play. Some think contract prices could actually see a small decline in July.

Propylene was lower and the spot market is again deviating widely from contracts. A couple of splitter and refinery developments were announced this past week that will maintain and enhance future propylene supplies. Despite the initial nomination to increase July PGP contracts by $0.03/lb, they settled steady at $0.52/lb. The spot market promptly took a nosedive; PGP for July delivery traded at $0.49/lb while August material sold at a further $0.02/lb discount. By the end of the week, PGP for prompt delivery was offered at $0.45/lb, a huge $0.07/lb discount to contracts which had just settled. The entire forward curve was similarly re-priced lower. There was very little activity seen in RGP, which was flat at $0.37/lb.

Polypropylene's (PP) spot market gave back half of the $0.02/lb gain earned the previous two weeks. Although the market had firmed amid better demand after June PP contracts settled down $0.155/lb - which brought the two month decrease to $0.255/lb, trouble could again be looming, Greenberg said. June contract orders were reportedly strong as processors had to re-stock their dwindling resin inventories, and forecasts for July were also high, but this month's orders may very well fall short. "As we suggested a couple weeks ago, PGP monomer could come under pressure again as additional crackers return on-stream, and indeed they did with spot monomer prices falling $0.07/lb, more than 13%, this past week," Greenberg said. The spot resin market is still balanced to slightly under-supplied with little generic prime availability, but this could change quickly if PGP monomer remains weak and some contract PP orders get cancelled or minimized as buyers look towards potentially lower August pricing. However, it is still very early in the month, and things could change along the way.

The spot resin markets were relatively quiet this past holiday shortened week, which also marked the beginning of the first quarter. Resin offers were light as expected, but should again begin to flow more freely. Although there were price increase nominations for July, we thought the markets could likely roll steady; PP has already confirmed flat and PE is now offered steady and might even see a small decrease. Spot monomer markets seem to have exhausted their small recovery rally with new cycle lows seen in Propylene. During the latter part of June when markets were still weak, we suggested the sensible re-building of downstream PP resin inventories to comfortable levels, but not to over-do it as the market sought direction. Although the spot resin markets have yet to really confirm, another perhaps smaller down-leg could be developing.