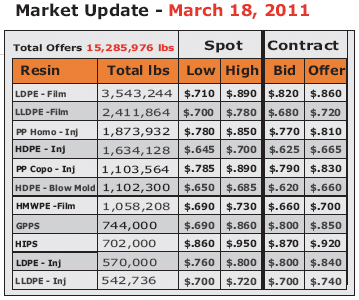 Energy markets continued to trade with heightened volatility, as futures contracts roll forward to May. May crude oil futures spent much of the week below $100/bbl, but rallied by Friday to finish at $101.85/bbl, down just $0.50/bbl for the week. May natural gas futures jumped $0.301/mmBtu, more than 7%, to end the week at $4.246/mmBtu. The crude oil : natural gas price ratio contracted to 23.9:1, which is roughly four times the 6:1 ratio considered parity.

Ethylene spot trading was active and prices moved higher, as cracker operating rates were strong with no major outages reported. Ethylene for March delivery last transacted at $0.56/lb to finish the week up $0.02/lb. March ethylene changed hands in an alternative pipeline system at $0.58/lb. Forward months were also higher with transactions for April and May seen in the mid $0.50s/lb, a slight discount to prompt delivery. Ethylene for delivery in the second half of 2011 was sold at $0.50/lb. The net transaction price for February ethylene was $0.49/lb, up $0.0375/lb from January. Spot ethylene has traded above February's NTP all during March. TPE CEO Michael Greenberg noted that March's NTP has not been discovered but should finish up from February.

Polyethylene (PE) spot prices regained the penny lost in the previous week. Prices for fresh offers have consolidated, gravitating towards levels $0.02/lb higher than in late February, indicating good support to the current price increase target. With $0.03/lb already implemented in February, it seems that PE producers will now secure the $0.02/lb balance of their $0.05/lb increase which has been open since December. The outstanding $0.06/lb increase will be re-attempted in April, as a few producers have nominated an additional $0.05/lb increase. Spot PE exports are difficult given the current price to Houston exporters, but integrated producers, aided by relatively cheap top-of-the-chain natural gas, have maintained their high-volume direct-export sales.

Propylene continued to tick higher last week, with refinery grade propylene (RGP) adding $0.02/lb to hit $0.72/lb. PGP traded a couple times with the week's final transaction at $0.77/lb, up $0.015/lb. Spot PGP is trading well above the March contract price of $0.725/lb, which was a $0.05/lb decrease from February. April PGP contracts have not been formally discussed, but TPE believes they should rise. The premium that PGP has to RGP has returned back to a more normal rate of around $0.05/lb.

Polypropylene (PP) spot prices stabilized, having already rallied about $0.05/lb from month-ago levels. Greenberg noted that the rally in spot PP is "interesting" since March PP contracts were actually down $0.05/lb. The $0.10/lb price break in the spot market was overdone in February, so the discount needed to be recouped. Much of the lower-priced inventory has been cleared, and the PP market has a firm undertone. New PP offers are coming in quite a bit higher as market participants begin to anticipate higher monomer costs and resin prices in April. PP exports are difficult to regions other than Latin America.

Spot resin market sentiment has improved and is now modestly bullish. Polyethylene producers, feeling the pressure of rising costs, will seek to add to their February/March gains looking to implement their $0.06/lb increase in April. Polypropylene producers will try to reverse the $0.05/lb decrease seen in March contracts, as April PGP contracts are poised to move higher. With April price increases imminent for both PE and PP, attractively priced resin offers should be considered for purchase.