Market overview: Spot resin trading was active, with a high volume of completed transactions recorded, good demand, and higher prices, as buyers scooped up spot material amidst rising monomer costs. The cost-push pressure from those rising monomers will lead to higher resin prices in April. Spot-trading platform The Plastics Exchange (TPE) noted that polyethylene (PE) prices rose a penny on average with some variance between grades.

Market overview: Spot resin trading was active, with a high volume of completed transactions recorded, good demand, and higher prices, as buyers scooped up spot material amidst rising monomer costs. The cost-push pressure from those rising monomers will lead to higher resin prices in April. Spot-trading platform The Plastics Exchange (TPE) noted that polyethylene (PE) prices rose a penny on average with some variance between grades. Spot polypropylene (PP) resumed its rally, jumping another $0.015/lb this past week. PE producers secured the $0.02/lb balance of their $0.05/lb increase, $0.03/lb of which was implemented in February. PP contracts dropped $0.05/lb along with March polymer-grade propylene (PGP) contracts, but spot PP prices rallied all month as spot PGP monomer raced higher. 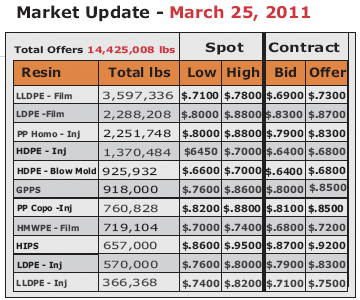 Energy markets traded higher with strong gains in oil and gas. May crude oil futures rallied $3.55/bbl to finish the week at $105.40/bbl. May natural gas futures built on the previous week's gains adding another $0.244/mmBtu to settle at $4.490/mmBtu on Friday. The crude oil : natural gas price ratio was largely unchanged, maintaining a very wide gap of 23.5:1.

Ethylene spot prices continued to move higher in active trading with a couple of new operational issues further feeding the hike. Ethylene for March delivery jumped $0.04/lb, last changing hands at $0.60/lb, its highest level since April 2010. TPE CEO Michael Greenberg notes that plenty of margin remains further upstream, with the spread between ethane and ethylene having jumped into the high $20s/lb. At that level, the gap is roughly four times the historic average. Ethylene for prompt delivery has carried a premium to future months, but material for April delivery traded at $0.60625/lb, which is above the March price, so the rally "appears to have legs," according to Greenberg.

Polyethylene (PE) spot prices pressed higher again in strong two-sided trading. Demand was a bit sluggish the first half of March, so sellers eager to find destinations for unsold railcars, were pleased when buyers emerged. Houston traders whose early offers seemed pricy, have now seen the market move up to their level, which has enabled transactions. North American spot PE exports to Latin America and Europe were strong last week, but Asian material that has been offered into Europe started to siphon off demand. With the $0.05/lb price increase now intact ($0.03 in February, $0.02 in March), and with significant monomer cost pressures at hand, PE producers will seek to implement their outstanding $0.06/lb increase in April.

Propylene's spot market was relatively quiet though upward pressure remains. Refinery grade propylene (RGP) ticked $0.005/lb higher to last transact at $0.72/lb. PGP did not appear to change hands in the spot market last week, with the last reported trade at $0.77/lb, well above the $0.725/lb contract price for March. April PGP has been nominated to increase as much as $0.10/lb, which would be a "shock" to the PP market, according to Greenberg, with that material so closely tracking monomer costs.

Polypropylene (PP) resumed its trek higher, having previously paused at a 50% retracement of the $0.10/lb break seen in February. March PP contracts dropped $0.05/lb commensurate with PGP contracts, but the spot resin market has rallied sharply during the month. TPE reported that spot PP supplies are fairly tight and prices added another $0.015/lb last week in anticipation of higher monomer costs in April. Spot PGP has been priced above March contracts all month, and April PGP has been nominated to increase $0.10/lb. Most PP offers are now priced in the $0.80s/lb with few good opportunities to be found at old prices.

The spot resin market was strong last week. Prices along the entire supply chain from crude/nat gas through NGLS, monomers, and resins all moved higher. The cost-push pressure is prevalent and will lead to resin price increases in April. Demand could be shaken as raw materials rally, damaging the manufacturing recovery. As we suggested last week, well-priced end of the month deals should be considered for purchase, resin will likely be scarce and more expensive in the first part of April.